I’d like to build upon my fitness from the 2015 “season.”  It’s tough though, especially since I didn’t really do much after it ended.  The plan was to take a little bit of time off, but keep riding so I didn’t lose anything (much.)  Plans change though.  Shitty job was shitty, and I was in no mood to ride my bike.  In fact, I just sat around drinking and eating.  Fortunately for me, I didn’t put on much weight.  I was right at 225 pounds during the season which is right where I think I should be for my height (6’4”.)  The last few months of inactivity only got me up to 231 (and that’s easy to get off.)  That’s one reason to look up I suppose.

When I started my new job, it was rad.  Now that I’ve been there a while and have had plenty of time for a proper assessment, I can still tell you that it’s rad.  I immersed myself in it though, trying to learn everything I can to be successful.  That left little time for bike riding.  Lucky for me, a lot of my coworkers (and two higher-ups) are cyclists, and that means lots of talking about bikes during the workday.  It was encouraging, and I was certain I made the right choice in my new employment.

I mean, I came in to work one day and my boss left a magazine on my desk… 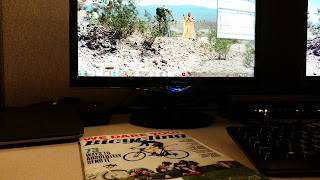 I know, it’s mostly a roadie magazine, but it’s still a cool gesture.

No more excuses.  It was time to get back to riding regularly.  Like I mentioned yesterday, I want to keep things fun.  However, if I want to be fast and not struggle during races and longer rides I need to train.  That means trying different things, riding different bikes, and exploring new places.  When I was a kid, my bike took me all over the small town where I grew up.  Roads, sidewalks, neighborhoods, and even into the woods with no trails.

The Klunker is perfect for that. 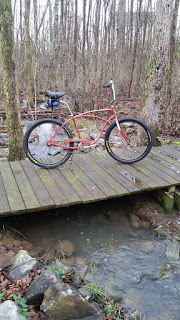 Behind my house, there is a vast, wooded area.  I went back there many years ago but I didn’t remember what I’d seen.  I veered off my normal path and “discovered” a swiftly flowing stream. 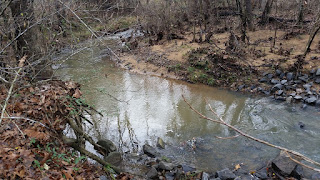 It was quiet and peaceful.  Only a few hundred yards from suburbia, yet I was out in the middle of nowhere.  And I got there on a bike that’s older than me. 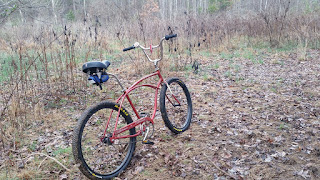 I rode/pushed my bike along the stream for a while, enjoying the tranquility of a random North Carolina waterway. 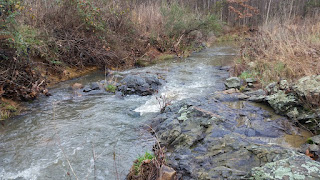 It was fun to explore.  The mileage wasn’t epic, but the pedaling was tough and gave me one helluva workout.  I felt like a kid again.

But I’m not.  I’m an old(er) man trying to train for the upcoming season.