I can't really pick one reason why I go back “home” to Florida every year now to do the 12 Hours of Santos.  The past two years, it was mainly to escape the weather (I've had to dig out of snow and ice just to leave the house.)  The weather in Charlotte was nice this time around, but I still wanted to go down to the “Biggest Party in the Sunshine State.”

I left early (enough) and after fighting a little Charlotte traffic I made good time.  My Tahoe gets surprisingly good gas mileage on the highway, so the first time I stopped was just after crossing the Florida line.  I refueled, then drove a little down the road to stock my cooler with beer and food (mostly beer.)  And after that it was back on the road… 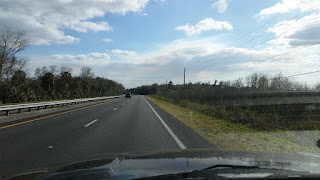 I decided that because of my destination, some proper “Florida music” was in order.  I popped in one of my favorite CDs, The Essential Lynyrd Skynyrd. 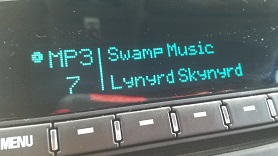 As I sang along and drove down some back roads, I enjoyed some of the few things I miss about not living down there.  The middle of the state is mostly free of tourists and there aren’t too many people around.  Well, except in the Big House… 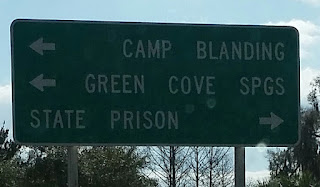 I was getting close to my destination in a hurry.  With only that one stop, I would arrive with plenty of time to get a good spot and setup camp.  I turned down the road towards the main trailhead, spotted a familiar vehicle at the bike shop, and turned around to hang out.

Besides, I had a couple of extra Niner bikes to deliver. 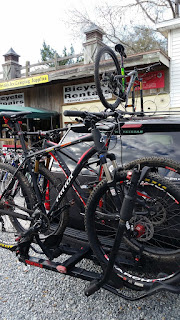 Niner Mike was hanging out at Greenway Bicycles, and after shooting the shit with him and the rest of the folks in the shop I made my way to The Vortex.  TomTom and Emily were still a few hours away, but I new my racing partner Mr. Shepherd would arrive at any moment (he’s just down the road in Bradenton.)  Just then, I got a text that said he’d been in an accident.  Some silver-haired old biddy had rear ended him (no one was hurt and there was no damage), but they still had to wait for the law to show up.  That put him way behind, so I grabbed a good spot and setup.

I had a bunch of free time while I waited for everyone, so I grabbed a beer and headed nextdoor to hang out with my Jacksonville people.  They were already getting rowdy. 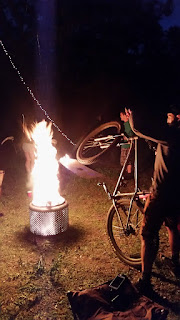 I drank beer and shot the shit for a while until everyone started rolling in.  Since we were “roughing it”, we all decided to go out for dinner.  I suggested a local place on the lake with some good food.

And by good, I mean Florida food.  You know, alligator. 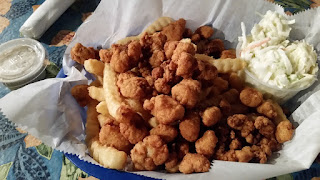 We had a good meal and headed back to the Vortex.  Mr. Shepherd and I talked a little strategy for the next day while we enjoyed some more beer.  Well, if you call “strategy” deciding who was gonna go out first for our team.  It was decided that he would take the first lap, and we would figure out everything else after that.

More beer, more bullshit, and eventually people started wandering off to get some sleep.  I slept like shit in my tent, and woke up the next day ready to race.  Luckily, I didn’t party too hard.

This guy did though… 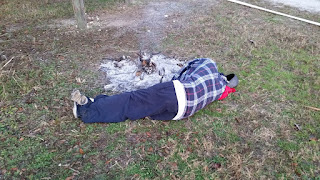 Next up, the actual bike racing part.  You know, because I always drag these things out.

See y'all tomorrow.
Posted by TheMutt at 8:32 AM