I haven't able to motivate myself enough to get out to ride in the cold.  Pathetic, I know.  My friends aren't great motivators either.  I make plans without them (or by myself) and say no a lot when asked to go ride, so I guess I can't really blame anyone for not asking me to go out to ride in the cold.  When faced with the choice of riding alone in the freezing cold, I usually choose the easy way out (this time of year anyway.)  Luckily, all is not lost when I don't ride bikes.  It's a lot of what I do, but not my whole life.

I haz other hobbies, you know.

I decided to head over to the guitar store on Saturday since I had a gift card to spend.  I like to go there anyway, since it's a lot like hanging out in a bike shop:  lots of shit to eyeball, touch, and lust after.  It's a good alternative to being frozen on a bike.

Anyway, I've been in the market for a new pedal to go along with my other effects.  Specifically, I was looking for a chorus pedal to replicate the sounds of some of the songs I play.  After thorough research, I ended up with something pretty rad. 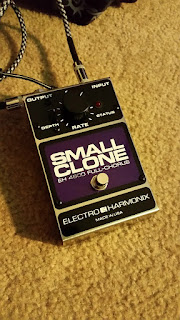 I know, it's not that exciting to those of you that ride bikes and come here to read about my pathetic bike adventures.  But, it's exciting to me and my pathetic music interests.  This pedal sounds good, and gives me the perfect effect for some of the Nirvana stuff I've been playing.  Big deal, right?

Sure.  But the funny thing is, I didn't really consider that when I bought it.  I had my choices narrowed down to two different brands, but something told me to get the Small Clone.  Something in the store... 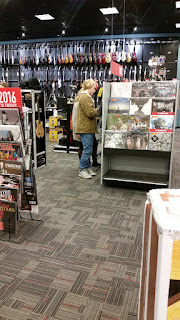 Look closely at the kid in that photo.  Does he look familiar?  Yeah, you guessed it.  While it may seem like a coincidence, I say bullshit.  The kid walked in there with his dress up clothes, picked up a few different guitars, and played them.  He only played songs from one band in particular.  Yeah, you guessed it again.

He was trying way too hard.  He wasn't that good, but at least he had some sort of passion.  All kinds of kids try to emulate people when they are finding their way in life, and if this kid turns out to be a great musician all because he tries to be just like Kurt Cobain, then so be it.

Everyone need a hero.

I'm too old for that shit I guess, but I still find inspiration in other people.  I think everyone does it.  I don't pretend to know anything about human nature.

That's not true.  I pretend to know about everything.  That doesn't mean that I do.

Hopefully this post was sufficient enough to get you through your morning poop.  One thing I know for sure, is that you only come here to pass the time.

Email ThisBlogThis!Share to TwitterShare to FacebookShare to Pinterest
Labels: guitar, music, not riding

You really wanna be a director for women's cycling team....like your hero?