The road to my recovery is a little less bumpy now.  I still have some annoying rib pain, but nothing (at the moment anyway) that's keeping me from doing anything bike-related.  During my convalescence though, it seems like I've neglected my body just for the sake of being on a bike again.  That may be true but it's a moot point now.

However, I was in a dark place mentally, and while one can argue that I'm like that most of the time anyway, I will say that trying to deal with being broken took its toll on me.  I did just enough to try to keep my sanity, but I did more than neglect my body.  I also neglected some of our bikes.  It's difficult to keep up with so many bikes when all three of us here in the house ride (and each have multiple two-wheeled machines.)  My bikes have been good enough (with the small amount of riding I've done), so I finally stopped being so unselfish and took a look at some of our other rides.

The first was Lunchbox's bike.  I've said it many times before, but he's prone to flat tires.  I've tried different tubes, tubeless, and the last step was a new tube and tire.  Without even riding, he had a flat. 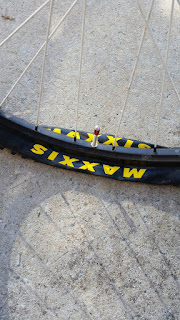 I knew it wasn't his fault now.  I suspected that the rims had an issue before, but I didn't really look into it.  He liked those wheels because of the white spokes, but I knew they were crap (cheap wheels from a bike long ago.)  I happened to have some new Niner wheels from a bike that I took off before riding, but there was one problem... 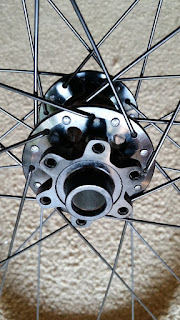 Thru axle and he haz quick release frok.

I scoured The Internets and found an adapter that would work.  I couldn't find anyone that had anything bad to say about it, which probably means that it sucks.  Who gives a shit.  I ordered it anyway, because I don't care.  It showed up, and installation was a breeze. 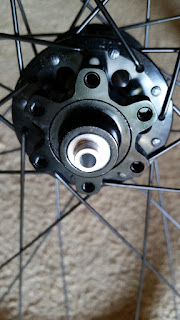 I used a new tube, same (new) tire, and moved the brake rotor to the new wheel.  No moar flat. 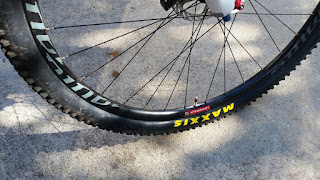 Now, on to the next issue.  The little lady told me she had a flat for no reason.  I checked it out and didn't see an obvious issue, so I did what any normal person would do and added moar sealant.  The next day it was flat again.  I decided to investigate further.  I took off the tire and saw that the rim tape I used was not doing so well. 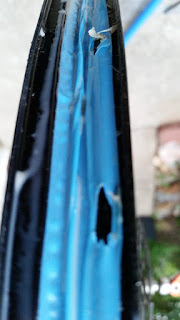 Something told me I would regret buying that tape.  I've used Stan's tape for years, but when I went to my local bike shop the last time they didn't have any.  I was told that this "other brand" was better (I won't say the name but it starts with an "R" and ends with some shit made by the Big Red S.)  And by the way, this happened once before too, but I chalked that one up to user error.  Now I had no doubt that it was a poor purchase.

The rim was re-taped, tire re-inflated, and flat time is over.  I'm throwing away an almost complete roll of rim tape because I didn't listen to my gut.  Lesson learned.

I forgot what that lesson was though.  Maybe it's that I don't need to be around people.


Or maybe that I need to start being a little more patient.