My last few "recovery" rides have been up in the hills so I can push myself to get back to whatever the hell I was before I hurt myself.  They've also been pretty lonely.  I chose to ride alone so I wouldn't hold anyone up, plus I didn't really feel like being around anyone.  That changed when I got a text from my pal Dirty Party Cycle.  He asked where there ride was this weekend, and I didn't really have an answer.  He proposed that we head up to Rocky Knob in Boone.

I was good with that, because I remembered how fun that place is.

I scooped up my pal and we headed north.  After driving through tourists and construction zones (and somehow managing not to stop for beer) we made it.  The first order of business was to hit the pump track... 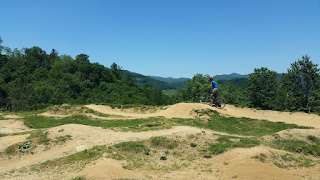 That was fun, but it was time to hit the trail.  We started climbing, and my heart rate went through the roof.  I had forgotten how much climbing there was in the beginning.  It hurt.  The legs felt good, but I had a hard time breathing.  My ribs were sore and probably had a lot to do with that.  Anyway, the DPC had to wait on me several times.  He said he didn't mind, but I did.  I was embarrassed.  I'd spend the past few weekends climbing steep stuff and didn't have that much trouble.  Maybe the terrain had a lot to do with it. 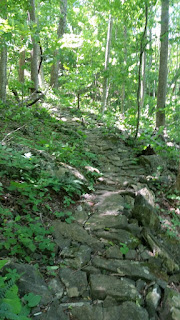 It took a lot of effort but it was fun.  And even though I felt bad about holding him up, I think my pal was having a good time too. 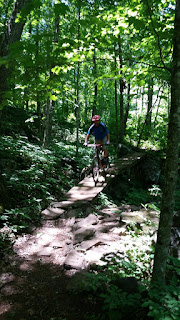 The climbs hurt like hell, but it was all worth it.  Once we got to the top it was all downhill.  I did okay on the technical stuff, even though my confidence isn't where it once was. Lots of rocks helped me get a little of my mojo back, but the grand prize was my favorite section out there. 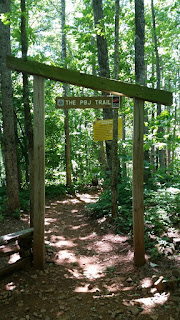 That is the crown jewel of Rocky Knob, and I flew down it without thinking about how much skill I'd lost during my recovery.  I didn't crash (although I had a few close calls),and we made it to the bottom with much happiness.

We even got in some more pump track action. 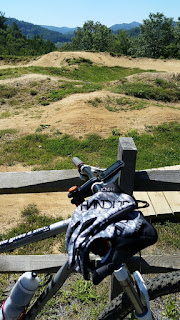 It hurt, but it was good to suffer.  I feel like if I work harder now that I'm feeling better, I'll get back to normal much quicker.  It sounds like bullshit, but I believe it so who gives a shit.

And to make a good day even better, we ended it with food and beerz at Appalachian Mountain Brewery. 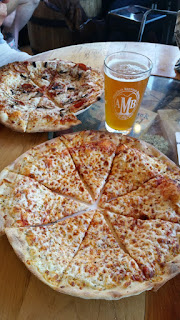 Another good day on the bike.  I am looking forward to many more like these.
Posted by TheMutt at 8:09 AM