Since my ribs were now nearly pain-free, I knew I wanted to ride over the weekend.  My last few rides have been up in the hills somewhere, but for some reason I decided to make the next one local.  I sat around a bit Saturday morning trying to figure out where I wanted to ride though.  It was a tough decision, especially since there are tons of choices.  To be honest though, I knew I would be a little bored riding by myself.  It was too late to round up anyone to go with me, or at least it would be when I finally did.  Wait, what?  Anyway, I had some things to do on the south side of town so I opted for one of our easiest local trails... 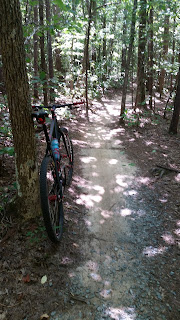 Flat(ish) with lots of roots.  Perfect.  My first lap was fun and uneventful, so I forced myself to go out for another.  I say "forced" because I was a little bored already.  I tried to make it interesting though, even stopping here and there to erase some of the cut-throughs that trail is known for. 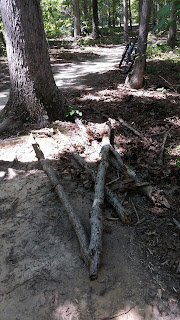 People will do anything to avoid riding over roots.  Which makes no sense to me.

After a little bit of that stuff, I picked up the pace to get the hell out of there.  That's when I realized the main reason I don't care for that particular trail...

I was climbing up a short, rooty hill when I saw a lady running down towards me.  I started to move towards the left side of the trail and made eye contact with her.  She seemed surprised that other people were using the trail besides herself, and let out a gasp as she jumped right in front of me.  The details are fuzzy, but I think I tried to move out of the way further as I slowed my forward momentum.  I narrowly avoided her, but just as she passed I hit a root and flipped over the handlebars (yes, again.)

I landed right on my elbow with the full weight of my body on top of it.  And, I heard a loud crack.

I sat there for a moment and checked my ribs.  No pain at all.  Whew.  And when I got up I noticed that I only had a small scrape on my elbow. 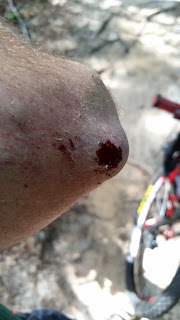 It didn't even hurt much, and as a bonus I didn't hurt anywhere else either.  I just had some cosmetic damage to my bike. 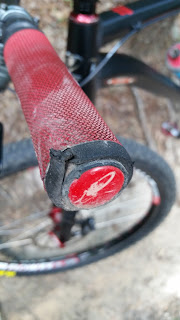 And I broke my bell too.  I had sadz about that. 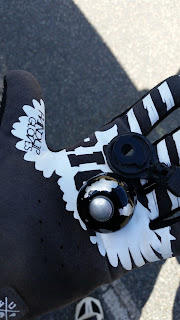 I finished my lap with no issues though, and I was ready to get on with my day.  While I was changing my clothes, I spotted my reflection in the mirror.

"What the hell is that?" I said to myself. 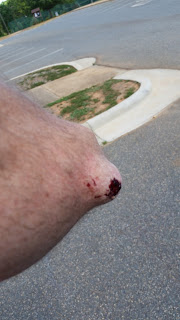 Ho.  Lee.  Shit.  At least it didn't hurt though.  And yes, the swelling has gone all the way down too.  That crack I heard came back to haunt me later though, as my shoulder/upper arm got really stuff and sore later in the day.  That too has subsided quite a bit (but not completely.)

It wasn't my fault (I guess), but at least I wasn't seriously injured during this crash like the last time I went over the bars.  I do find the whole thing kinda funny though.  My last five rides (after broken ribs) have been in the mountains, and the first time I try to ride local I get hurt again.  This one was a small setback at least.

I definitely need more practice.  My fitness is coming back, but I still feel kinda wonky about my bike handling skills.  Sure, up in the hills there are less people sharing the trails, but the solution isn't to avoid local riding all together.

I hope not.  I kinda like being able to ride local when I can't get to the hills.   I just need to pick the right trails I guess.

Or get some training wheels.

Mountain biking is dangerous.  Someone should ban it.