Road Easy And Put Away Wet

Despite the suggestive title, my ride over the weekend wasn't that awesome.  After a loooooonnnnngggg day of drinking at several different establishments I was beat.  We got home late and I slept in the next day.  I knew I would, but I was unprepared for how I would feel.  I wasn't hungover at all, but I was dead tired.

I had originally planned to hangout/ride at the Pisgah Enduro on Sunday, and waking up at 8:00 a.m. gave me plenty of time.  I ruined that shit when I fell back asleep "for a few minutes" and ended up sleeping well past noon.  I didn't have the time or energy to drive up to Old Fort so I did absolutely nothing but watch the little lady take off for a road ride.  I wanted to ride too, damn it.

I eventually decided on a road ride on my own for some reason.  Okay, I know the reason.  I haven't been feeling like riding anything locally on my mountain bike lately, preferring instead to head for the hills.  Sticking to that, I figured a roadie adventure wouldn't be that big of letdown. 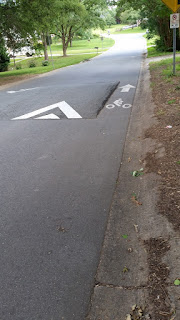 Well, it was interesting I guess.  I had no destination in mind and just wandered around.  I still missed the dirt though. 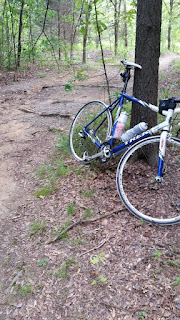 That kinda sucked on skinny tires.

I was far away from home, and kept taking roads I'd never ridden before.  It was good because I saw some interesting things. 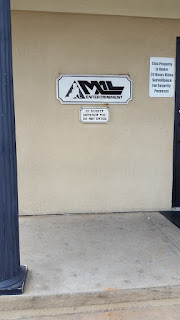 On the way home the sky turned black.  I thought I had plenty of time, but the sky opened up and I started getting wet.  The rain came down and it cooled me off, making my road ride even moar fun.  I sprinted home and finished with nearly twenty miles for the day.  I cracked a beer shortly after, then the little lady and I went out for tacos.  I was beat though.  One small road ride and one measly beer put me down for the count.

If this is getting back to normal, I sure as hell don't remember what that was before.

At least my ribs don't hurt as much.  Must be all the beer and Mexican food.