After a nice twelve mile jaunt from our hotel to Saint Simons Island, our adventure was just beginning.  After lunch (with alcohol of course) we started exploring the island a little more.  There were neat little bike paths everywhere, and even if we did have to ride on the road it wasn't too bad (traffic out there is light this time of year.)  Riding along and heading north, we spotted a bike shop. 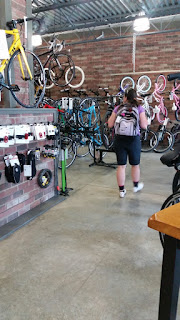 I don't remember the name of it, but they were pretty nice folks.  We didn't stay long, but long enough for the little lady to buy a cool t-shirt.  We hit the bike path some more and we were having a blast.  I kept scanning the area for fun tings to do when suddenly I spotted a path off into the woods. 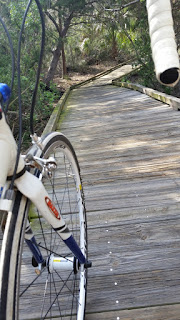 It wasn't too long, but the scenery was nice. 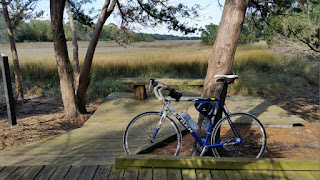 And the little lady didn't seem to mind one bit, even taking the phrase "dirt roadie" to a new level: 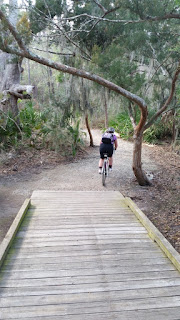 Back on the bike path heading north, we noticed some construction.  Instead of closing it off and forcing bikes onto the road, they did a temporary bypass with some sort of roll-out bike mat thingy. 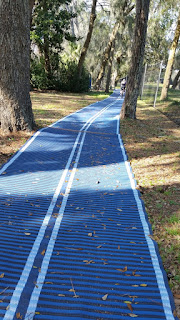 It wasn't easy to ride on, but it was better than riding on straight grass I guess.

We made it all the way to Fort Frederica National Monument, which was the end of the path.  They were about to close (and it was getting late) so we turned around and headed back towards our hotel. 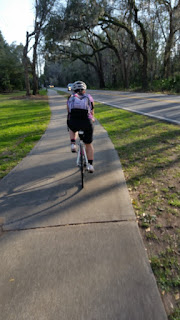 I was dragging ass at this point.  Although the mileage wasn't terrible, we'd been out for over six hours and I was tired.  I quick stop for caffeine at a local grocery store did the trick, and soon we were racing back across the causeway. 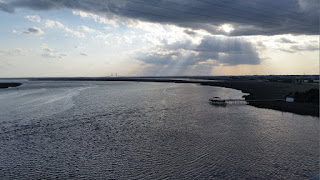 We made it just before the sun went down.  We were beat, even though it was only thirty miles.  Just being out all day took it out of me and I wanted to die.  But instead of ded, we needed foodz.  We cleaned up and headed to a local restaurant to fill our bellies with food and alcohol.

And suddenly we felt better.  And Little Miss Sunshine felt moar better because.. 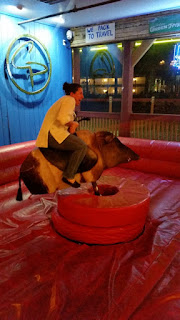 What, you've never ridden a mechanical pig?  Neither have I.  I talked her into it and sat back to enjoy the show.

Much fun was had on our trip, and that was only the first day there.  We crammed so much into one day but we had more time left.

Good for me because I can go on and on about it.  See y'all tomorrow.
Posted by TheMutt at 8:33 AM