A weekend has two days.  Sometimes I view them as separate but equal.  Hence the title.

Anyway, there were more adventures.  The road ride thingy we did was just part of it.  The day before, we crammed a whole bunch of shit into one day (which is par for the course around here.)  We started off with coffee at a local mom and pop shop, a big ass lunch (at another mom and pop), and a little shopping at a local market.  Once our lunch was digested, we started with our main task for the day...

Riding in the dirt.

The little lady and I headed over to Rocky Branch Park (just across the river from Charlotte) to hit some singletrack.  But first, we had to test out the new pump track. 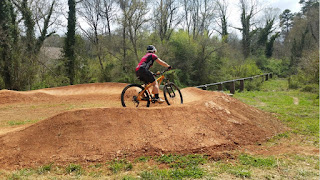 Much fun was had, but we really wanted to be in the woods.  When I saw we, I meant "we." 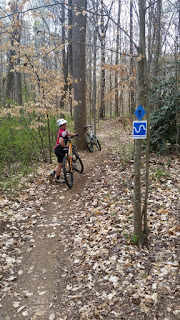 It wasn't some Strava-fest (do you even know me?) but we had a blast.  We rode around having fun, just enjoying our time in the dirt.  I even caved in and asked the little lady to take a photo of me. 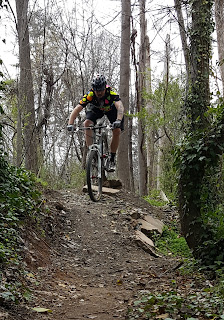 She wasn't happy taking just one though, so I had to ride through a vegetable tunnel so she could get the shot she wanted. 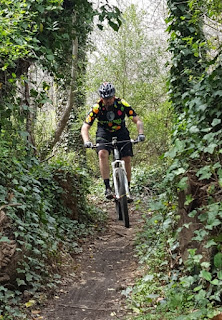 Since we were in a photo-taking mood, I made her go back and hit a feature that she initially declined to do.  Turns out she loved it. 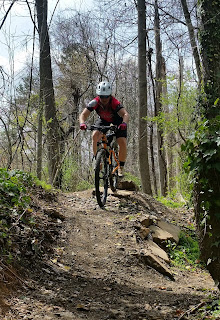 We had so much fun, and even hung out with some of my friends that live close by.  We started talking about the local distillery, and they mentioned that the tour is pretty rad.  We realized that we still had time to make it to the last one for the day, so we bolted and got there right on time...

At the Muddy River Distillery. 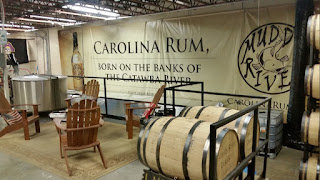 The tour was cool.  Eight bucks for a small tour and the story of how they came to be.  They also give you a shot glass, and let you try eight different "spirits."

Well shit.  We're always down for some day drinking. 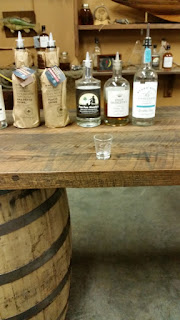 Straight shots, no chaser.  We were happy.  You can only buy one bottle per year directly from the distillery (archaic NC booze laws), but you can get all you want from the local ABC stores.  We each got a bottle to go, and made plans to buy more later.  We left there feeling good for sure.

My day wasn't over yet though.  I had made plans to attend a social with pro mountain biker/badass Sue Haywood, and although I was beat ass tired I went anyway.  We drank beer and asked her questions, but I didn't really take any good photos.

Unless you think this creepy shot of me, her, and Dicky is a good one. 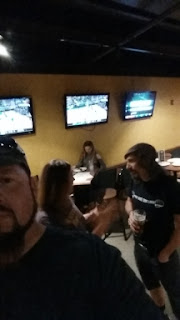 It was a long day, and it's difficult to pick my favorite part of it.  Oh wait, I know.  My favorite part was the graffiti in the men's bathroom I saw when I went to let out some beer. 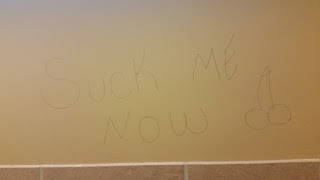 I am a juvenile.