And So It Begins

Even though I just completed building “The Greatest Short Track Bike on Earth”, the adventures are just beginning. While it is practical to ride a hardtail bike on most of our local trails, I haven’t been on a non-squishy bike since I was rockin’ the BMX back in the day. So yeah, I’ve been spoiled just a little bit. It would be an understatement to say that I had a little concern about my hardtail cycling aspirations. Hell, I even cringe every time I hit a pothole on my road bike, with its lack of suspension and all. The Friday after Turkey Day was D-Day for me (and this not-so-fancy machine.)

I was running around a little that morning, although I didn’t participate in the “Black Friday” phenomenon that occurs at the start of the holiday season. I had no intention of going near any kind of big box store or any of our local malls. When I got back to the house, I received a call from none other than the Dirty Party Cycle. I had posted a message a few days before on his Facebook page indicating that I was looking to ride off some of the turkey I had consumed. I’m sure that was the purpose of his call.

Me: “I was thinking of riding too, but I have a few minor adjustments to make on the Greatest Short Track Bike on Earth.”

DPC: “Cool. Where were you headed?”

Me: “I wanted to test out my kidneys on the rooty goodness that is North Meck.”

DPC: “That sounds good, I’ll meet you there.”

Me: “Groovy. I’ll finish up here and I’ll see you at the trail.”


After I hung up the phone, I worked on the brakes and shifters, and everything was tip top in no time. I know, an awesome bicycle mechanic like me can take care of issues like that lickety split, so I wasn’t worried. I informed Little Miss Sunshine of my plans, and prepared to head out the door. I would have invited Lunchbox, but he was at Soul Ride for the day. Looks like skateboarding beat out mountain biking for him that day. No problemo. 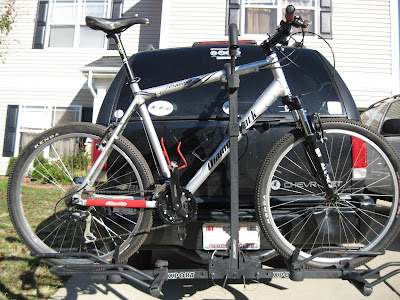 The Greatest Short Track Bike on Earth took its rightful place on the rack, ready to hit the trail.

I drove the fifteen minutes or so to the trail, and there was no DPC in sight. I thought for sure that he would get there before me, but that wasn’t the case this time. That’s fine, since he’s usually the one waiting on me. Just as I unloaded the bike and started putting on my gear, he pulled into the parking lot. We unloaded his bike from his truck and he had to make some adjustments, particularly to the seat height. 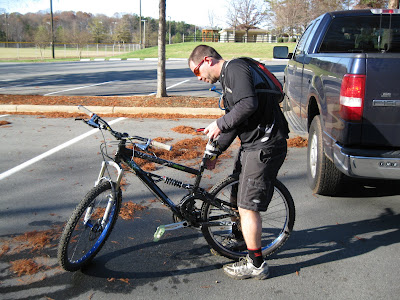 He was setting up to be “Jacked to the Max” so we could do some “Hot Laps.”

We pedaled around the parking lot for a few minutes, just so I could see what I was getting myself into. I liked the burly feel of the frame, but I felt every single bump in the parking lot. I wondered why the hell I even bothered with a non full-squishy bike. It was too late to turn back now, so we headed to the trailhead. 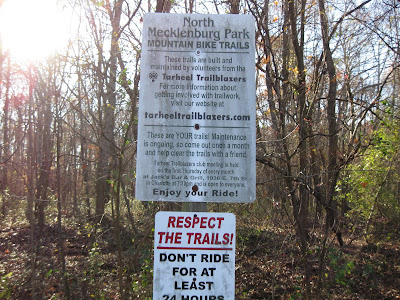 We should clean off that sign. It’s very dirty.

We took to the trail with a quickness, without much of a warm-up. The trail starts with a nice little drop-in, and goes immediately to a climb. Although the roots really sucked without rear suspension, I enjoyed how much better I could climb on the new steed. All of the energy that is normally lost to the suspension compression (say that ten times fast) was transferred directly to the rear wheel. While the rear shock on Goose has the “Pro Pedal” feature that’s supposed to prevent that lost energy, this was way better, albeit less comfortable.

After that climb, the trail opened up to a downhill section with a few turns. I did feel a lot faster, but again I felt every single bump. I can’t totally blame that on the hardtail frame though, because the fork wasn’t working worth a damn. It was at that moment I realized why I had a new-looking fork just lying around the shop. It sucked.

You see, I had it rebuilt under warranty last year at a local shop (that I don’t care to mention since it’s not my local shop), and it hasn’t worked right since. It was my primary fork up to that point, but when I got it back from the shop I eventually put it on Lunchbox’s bike, Clark. I thought that it needed to be broken in, so he rode it for a while. It would hardly compress on the bumps on the trail, and it never got any better. That’s why I ended up replacing his fork with a RockShox Tora a while back. I thought that my added weight would be enough to make the damn thing work right, but it appears that it won’t. The plus side is that it will be faster. However, it is almost like riding a fully rigid bike. Looks like I’m in for a little suffering. Yay, I love me some suffering.

Anyhoo, we continued on our “Hot Lap”, and I was quite pleased with the speed and handling of this bike. I started thinking however that North Meck was probably not the most ideal place to try a bike like this. I should have taken it to the actual short track that it was intended for. Another lesson learned.

We completed our first lap and immediately headed back out on the trail, this time in the opposite direction. I was still faster, but I was starting to feel the pain of suspension-less riding. Even the jumps felt weird to me. I could launch off of stuff pretty much the same, but the landing sucked, quite frankly. A bike like this is meant to stay on the trail. I’ll save the jumps for the full squishy bike. We wrapped up our last lap, but we still wanted to ride a bit more. I informed the DPC of an unnamed trail that I “discovered” one day while I was driving around the area. It was right down the road, so off we went. 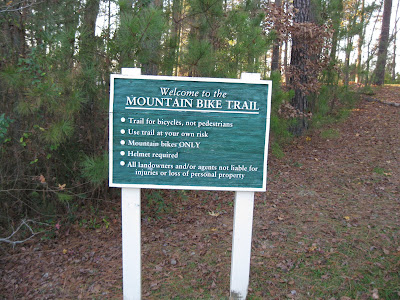 That’s it? The Mountain Bike Trail? It needs a better name.

We pulled into the parking lot of some county park which probably has a name, but I can’t really remember it. Keeping with the theme of the trail name, I’ll just call it the “County Park.” There were the typical baseball fields and playgrounds, and there was also a paved walking and/or running trail. We unloaded the bikes again and followed the signs (yes, someone put signs up.) The trail flowed pretty well, but you can tell that it doesn’t get much love. There were a few trees down that required a little hike-a-bike, but aside from that, it was really cool. Lots of elevation changes, and fast, yet sketchy downhill sections aplenty. The climbs weren’t too bad, and we never once got lost. The only man-made structures we encountered were a few bridges, but there was still lots of fun to be had. I didn’t run the bike computer, but I estimate that it was about 3 miles or so, including the return trip.

After finishing the trail, the DPC and I were yearning for more riding. We took off on the walking and/or running trail and ended up in a parking lot of a neighboring building. We saw what looked like a really fun riding opportunity. There were these giant rocks everywhere, strategically placed as if the mountain biking gods had placed them there just for us at that very moment. This called for a photo shoot. 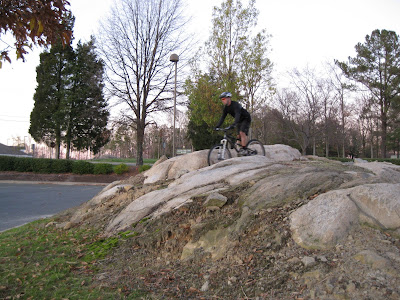 The DPC was up first. 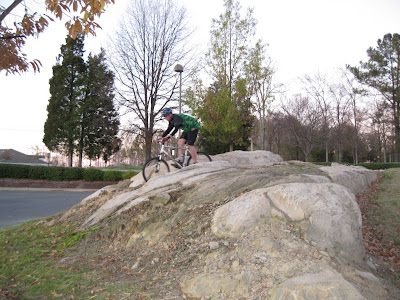 Why oh why didn’t I bring the full squish? 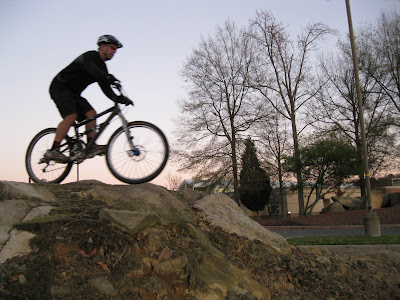 Now from a different angle. 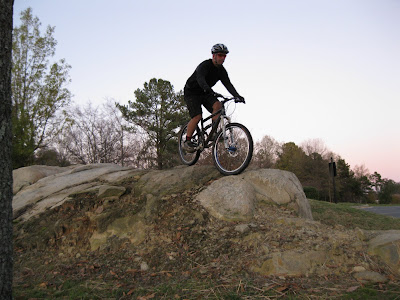 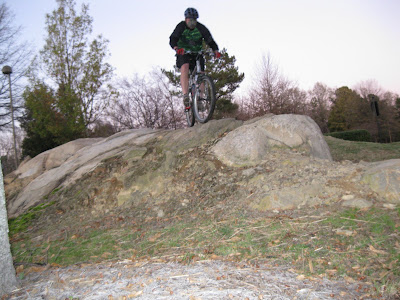 Man, this is gonna hurt.

All in all, it was a nice day of riding. While I certainly picked the wrong bike for that day, I still had fun. I’m glad I got to test out the new Greatest Short Track Bike on Earth though. It will serve me well in the upcoming Winter Short Track Series. However, when I return to this rocky goodness, I’ll make sure I bring Goose along for the fun. The DPC and I parted ways after that, as darkness was upon us. We would ride another day. Soon, I hope.
Posted by TheMutt at 7:12 AM