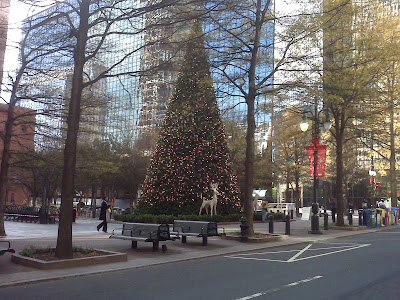 Wow, another weekend down the tubes. Also, another riding opportunity ruined by the funky weather we’ve been getting around here. While most of our area trails were open on Saturday, I didn’t get a chance to ride anything. I thought about it, but I had other things to do, unfortunately. I had to do some Christmas shopping, so that meant I had to join the idiotic masses as they traipse around our local shopping centers. In retrospect, I should have taken Goose out on the trail first thing in the morning, and then hit the stores. Sometimes I don’t think too clearly.

I had a list of things to buy, so that made my day a little bit easier. That’s not to say that I didn’t have any adventures though. I started the day by dropping off Lunchbox at the local skatepark for an all day skate session. He was obviously wise enough not to join me on my shopping escapade. After that I headed out to Albemarle, NC to grab some wine at Dennis Vineyards, my favorite local winery. I didn’t really have any time to sample any of their delicious alcoholic beverages, since I was on a tight schedule. Since I was in the area, I stopped by my local shop, Middle Ring Cycles to chat with Brian and also to pick up a few things. At least I was able to squeeze something bicycle-related into my day so I wouldn’t go totally insane. The day would only get worse though, which greatly added to my stress level.

I high-tailed it out of Albemarle to my next destination: Kannapolis. I had to visit Best Buy and Target (standard holiday shopping locations.) While I was driving through the parking lot, I nearly ran over a jaywalking Santa and Mrs. Claus. I know it’s Christmas time, but I thought it was rather odd to see those too wandering through a parking lot. Our paths would cross again.

After a quick visit to Best Buy, I walked through the parking lot to get to Target. It was there that I saw jolly ole Saint Nick posing for photographs. I snapped a photo just to prove that Santa really does exist. 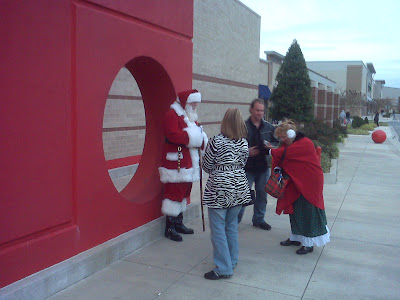 I had a rather large list of things to get in Target (including normal household items), so I made my way through the crowd at the door and headed inside. After a few minutes, my arms were full, and I decided that I needed a cart. On the way in I had spotted a lonely abandoned cart in the electronics section, and decided that I would head back there to grab it. I stood there for a moment to make sure that it didn’t belong to anyone. It was empty and there was no one within ten feet of it, so I grabbed it. About the time I put my few items in it, this guys comes up out of nowhere to claim this abandoned shopping buggy.

RG: You can’t take my cart.

Me: This cart was here all alone, and you were nowhere near it.

RG: Go get your own cart.

Me: I claimed this one since it was empty. It’s mine now.

RG: Grabs the cart and gives me the mean face.

Me: Do you wanna go outside with me so I can spread some Christmas cheer?

RG: Puts his head down and walks away.


That was a true story, unfortunately. I know it’s Christmas time and all, but this guy was just being an ass. The right thing to do would have been to just walk away, but my way seemed to work just the same. Besides, I’m not letting some stupid ass ruin my holiday cheer. I’m not some mean bully or anything, but I wasn’t about to let this guy step all over me. I hope he visited with Santa on the way out to confess his naughtiness. Maybe he’ll get a lump of coal in his stocking this Christmas. Hell, I might get one too for my behavior.

Since this post is almost totally stupid today (hey, it's what I do), I thought I would at least inject a little humor. During my travels over the weekend, I saw a funny bumper sticker that I wanted to share. It really sums up all of the traffic issues we have around here in Charlotte. 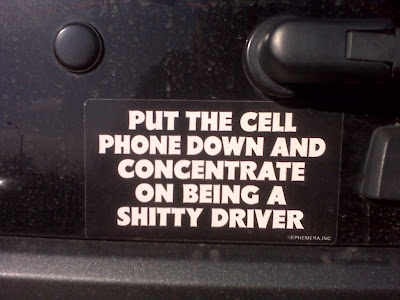 See you tomorrow.
Posted by TheMutt at 10:18 AM

This shitty weather brings out the pissed off biker in all of us,coupled with ego of some random grinch (he could have just let you have the cart as a show of holiday cheer)it can be challenge to smile.