Time For a Nice Ride

With a day of riding the “Greatest Short Track Bike on Earth” in the books, I was no longer eager to continue riding the hardtail (at least anytime soon.) The day after that adventure, the family and I planned to hit up Sherman Branch for a nice leisurely ride. I had originally considered the smooth flowy trails of Da Branch for my initial test ride location, but somehow I ended up at North Meck. I suppose that’s partly because the Dirty Party Cycle had to urge to ride somewhere he hadn’t been in a while. So be it. I had fun, but I was ready to get back on Goose for some full squish action. When the family and I started packing up the bikes for our trip to the trail, I thought I heard a sigh of relief from Goose. This of course was while I stared at the “Greatest Short Track Bike on Earth” in disgust after what it did to me on the trail the day before.

In no way have I considered abandoning my hardtail aspirations, despite what I may be implying. I built that bike for one specific purpose, and that’s to race the Winter Short Track Series with it. Of course, I’ll need to ride it a few more times before the series starts to get used to it, but I have no plans for that anytime soon. You can be sure that I’ll pick a “smoother” trail when I do bring it back out for some singletrack riding. I digress.

We arrived at Sherman Branch on one of the most beautiful days that I have seen around here in a while. The parking lot was nearly empty (surprisingly), but that wouldn’t last for long (as I would later find out.) We decided to take the route that we use for out regularly-scheduled Kids Rides, since Little Miss Sunshine hasn’t been on the bike as much as she would like to lately. Lunchbox and I were all for that, because there is plenty of fun to be had on that loop. We took a nice easy pace through the windy singletrack, hitting a few of the obstacles along the way. LMS was having a good time as far as we could tell. 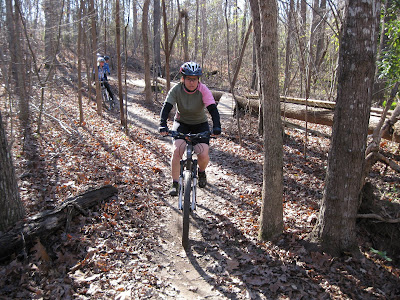 We also ran into a few of the local Dirt Divas on the trail near the brand new log skinny. They watched as I did it a couple of times (no pictures though, sorry), and then they were on their way. 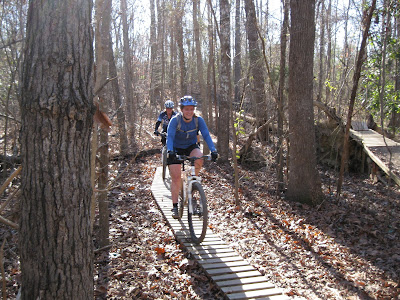 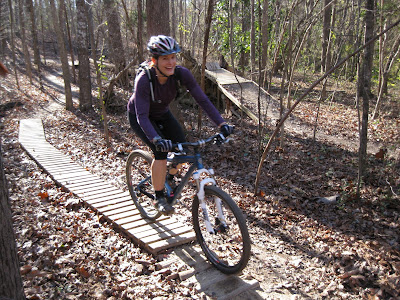 The Divas are a happy bunch I tell ya.

We also wound up running into Mr. President (of the Tarheel Trailblazers that is) at the same place. He stopped and chatted with us for a bit, and then he was on his way. 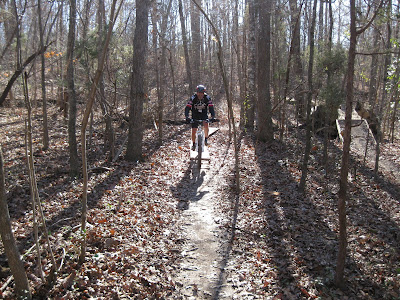 There is something about this trail that makes everyone smile.

After our encounter with members of the local mountain bike clubs, we were on our way too. I sped up ahead every once in a while to grab some photos of Lunchbox and Little Miss Sunshine. They both seemed to be having a great time. 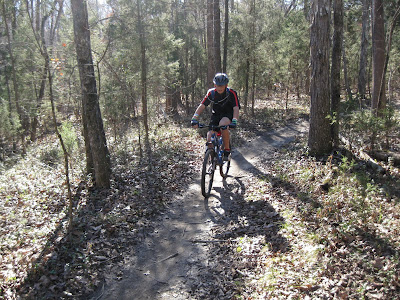 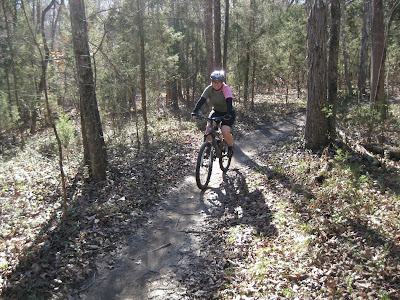 We made our way through the last section of the trail, and started to make our way back to the trailhead. We came across a nice long bridge, which I thought would be a fine photo opportunity. 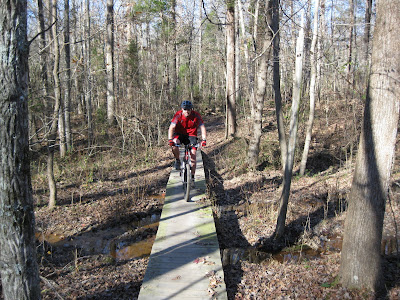 See, I’m not such a serious racer-guy after all. 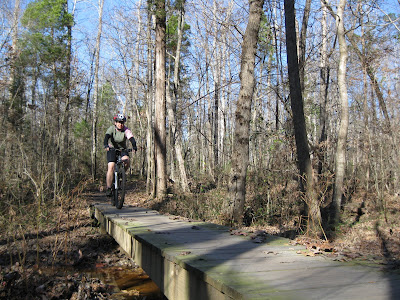 Lunchbox gets credit for these two photos, and the angle selection. He has a good eye for photographs. 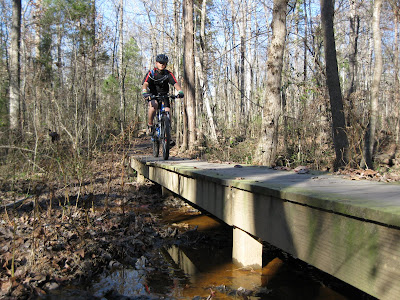 “Uh, Dad, did you just steal my prime picture-taking location?”

I guess that was it for the day. We made it back without any crashes or mechanical issues. Everyone had a great time, so I would call it a successful riding day. We got back to the parking lot just in time to see it fill up. I guess the word got out that the trail was in great shape. There were so many cars that I could barely get my truck out of the parking lot. I guess it’s a good thing that we arrived earlier, or we might not have found a spot to park. If you’re ever in the area, check out Sherman Branch. You won’t be disappointed. Well, unless of course you can’t find a parking space.
Posted by TheMutt at 7:26 AM