Get The Monkey Off Your Butt 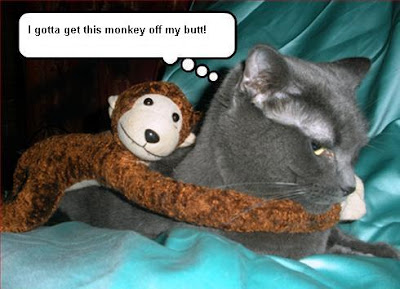 I was contacted recently about reviewing some products. That’s strange for me, particularly since it means that people are actually reading this mindless drivel that passes for a blog. Also, I usually buy some product I need or like (or someone tells me to buy), and write a review on my own. This is the first time I’ve actually been sent anything specifically for my review, so it’s a little weird. Now that the pressure is on, I’ll tell you all about it.

It all started when I received an e-mail about something that cyclists (and other folks I guess) struggle with on occasion. No, it wasn’t an e-mail about increasing the size of my manhood (I’m good, thank you), nor was it an e-mail asking for help from some guy who works in a Nigerian bank. It was actually legitimate, and it was regarding the ever-so-hilarious-sounding Anti Monkey Butt Powder. 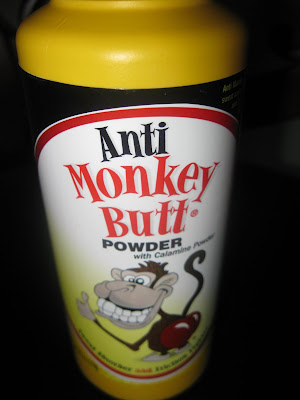 What the hell is Anti Monkey Butt Powder, you ask? Well, it’s powder that probably prevents Monkey Butt. Duh! So, what is Monkey Butt then? Well, since I couldn’t come up with anything that was any better than what I’ve already read on the Internets, I jacked some info from their website:

It's a term used by motorcycle riders to describe the soreness, itching and redness that occurs when you ride and sweat on a motorcycle for hours. If you have to walk bowlegged like a monkey to prevent your skin from rubbing, you have Monkey Butt!


Since I don’t ride motorcycles anymore, why the hell would I need this powder? Well, maybe because I ride and sweat on a bicycle for hours. See, this stuff is proving to be versatile already!

Check out this video:


I know the guy in the video is a jogger, but the principle is the same. That video had me laughing my (monkey) ass off, so I had to try it. Does it work? Well, I’ll let you decide (or I’ll decide for you in a minute, whatever.) Since I use many different types of anti-chafing products, I am loyal to none of them. That should make this review unbiased (except for the fact that they sent me a sample.) I’ve had success with some products, and failures with others. Would Anti Monkey Butt Powder pass the test?


When it was time to apply the powder, I quickly realized why I have used only anti-chafing creams up to this point. I dumped some powder in my hand, and tried to put it on my, uh, Monkey Butt. I was mostly successful, except for the large white cloud that filled up my bathroom. I guess I poured a little too much in my hand, and it kind of looked like an explosion at a donut factory. Without getting into too much detail, I was able to get full coverage. And just like that, I was ready to ride.


I had a bicycle play-date schedule with a few friends, so I made the 1 hour drive to the trail of the day. We found out it was closed, so we had to drive another 30 minutes to the next one. I was a little worried that the effects of my powder application wouldn’t last, but I never once thought about reapplying it. This was, after all, supposed to be an honest review.


When we got to the trail, it was hot (surprise.) We headed out, and I hoped that I wouldn’t get any crotch rot (a.k.a. Monkey Butt) while I rode in the hot sun. Honestly, I never even noticed it was there, which had me a little worried. Since I had only used anti-chafing creams in the past, I could always feel something greasy to let me know it was still there. That wasn’t the case with the Anti Monkey Butt Powder. Was it still there and working? Well, we finished our ride, and I felt great. I guess that means it was still there.

The verdict? It works. In fact, I didn’t sweat as much as I normally do, so that’s a plus right there. That is probably the main reason that you get crotch rot, saddle sores, etc. anyway. It was relatively easy to apply (aside from that minor incident), and it’s pretty cheap to buy ($5.95 for a bottle on the website.) The “mystery fragrance” was really pleasant, and the powder kept my, uh “nether regions” really dry. Even though it might sound a little gross to discuss one’s “nether regions”, we all have them. We also sweat a lot down there, and Anti Monkey Butt Powder keeps everything in tip top shape. My advice is, go right out to their website and buy some. Well, unless you actually like having Monkey Butt. That my friends, is gross.
Posted by TheMutt at 8:23 AM

With 'extra fragrance' even!!!!

You should have used real donut powder on your taint. It smells way better.