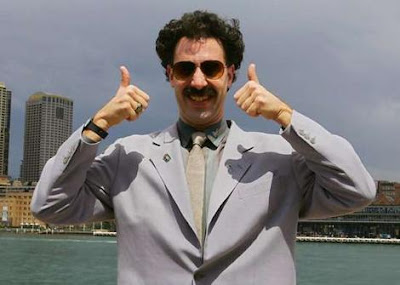 Yes, I finally got to go for a ride this past weekend. The freezing temperatures subsided for a bit, and we were blessed with some nice weather. The Dirty Party Cycle made the trek from the foothills to join me for a ride at our local happy place, Poplar Tent.


It was just warm enough where we didn’t need to bundle up, but we still needed a little extra clothing for warmth. The riding would warm us up quickly though, and we got down to business. The DPC was enjoying the awesome trail conditions: 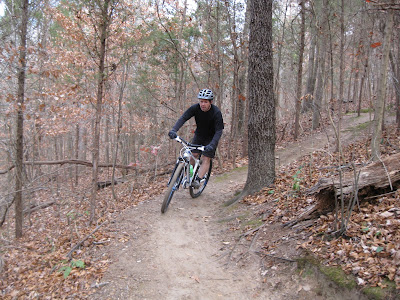 We rode at a decent pace, but my lack of bicycle fitness became apparent rather quickly. We did our best to fly down the trail, but I suffered a bit on the climbs. The goal (for me anyway) was to take all of the options out there, and leave no section of trail unridden. We stopped every so often for photo ops though, and some of them were even good. Here’s one of my favorites: 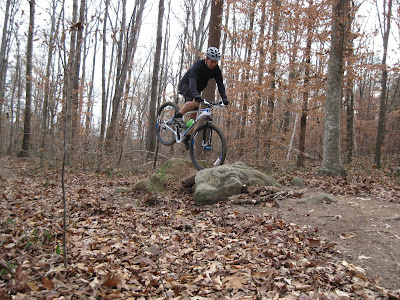 The DPC was trying to conquer this rock with his new 29er, but the middle was a little washed out. That caused him to do a little endo, but he never fell of the bike. I guess his new big-wheeled bike doubles as a trials bike.


After riding for a bit, we ended up at the teeter totter. This is always a good spot for a photo. Borrowing an idea from Little Miss Sunshine, we decided to take the photos form a different angle. I got down next to the teeter, and the DPC did his best to try to make me flinch: 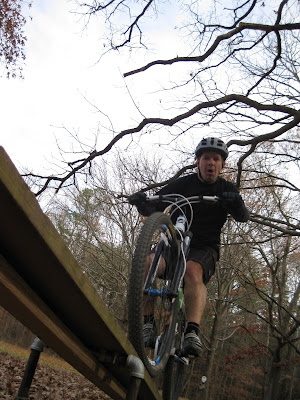 I was next, and I stayed away from the edge of it: 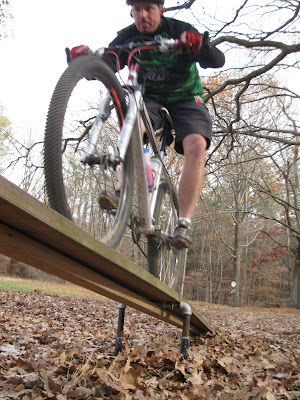 Poplar Tent is full of man-made obstacles. The DPC was full of confidence, which he attributes to his big wheels. Here’s another skinny that needed to be ridden: 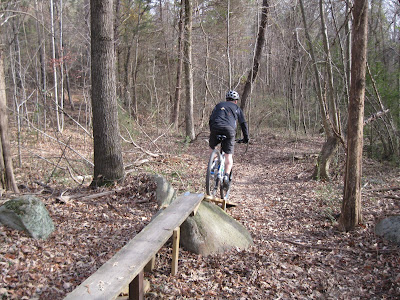 Having enough of the man-made stuff, we decided to hit the rock dam. There are few correct ways down this feature, and the DPC found one of them: 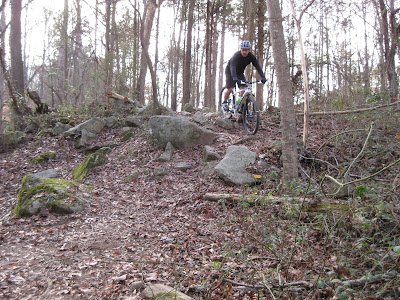 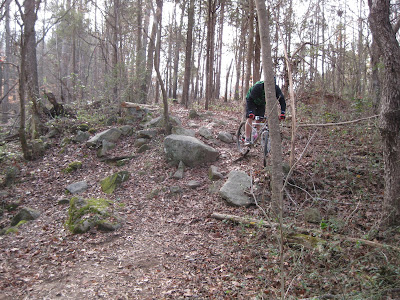 We continued to play on the man made stuff: 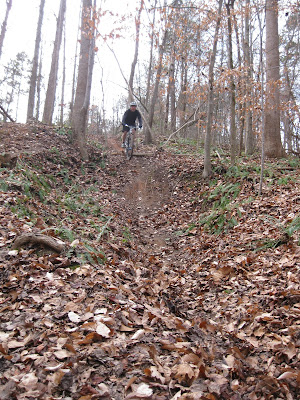 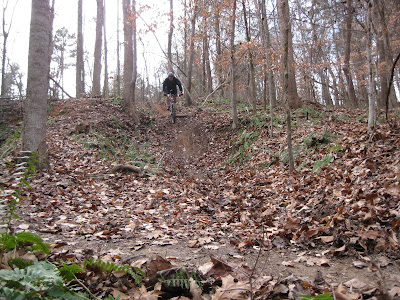 The Gravity Cavity was next on the list, so we stopped for an old fashioned picture taking session: 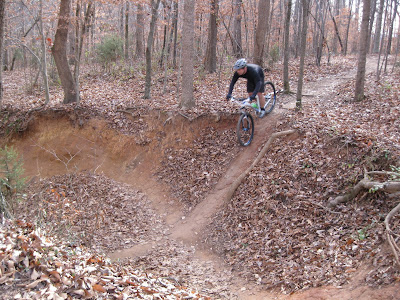 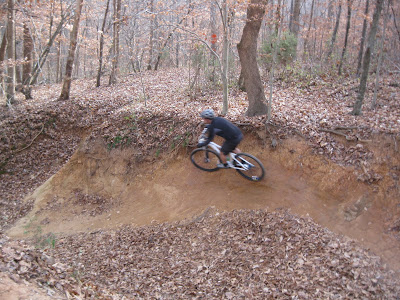 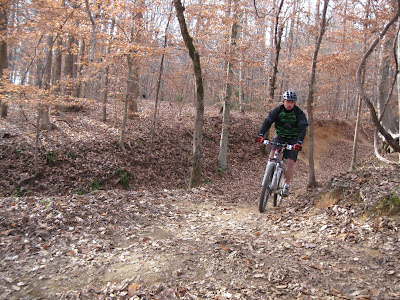 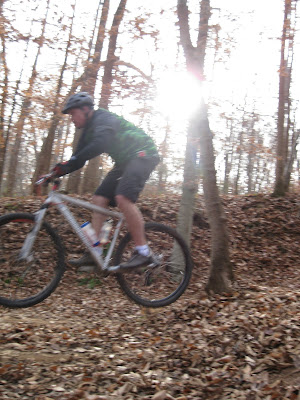 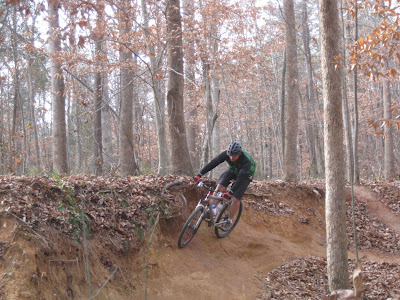 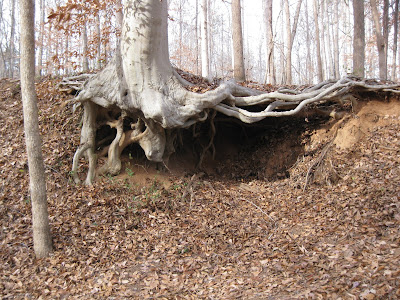 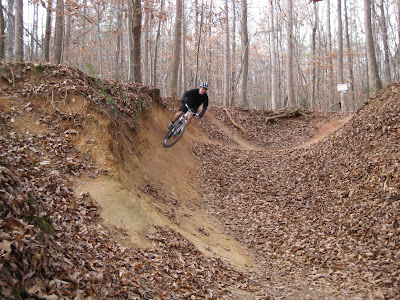 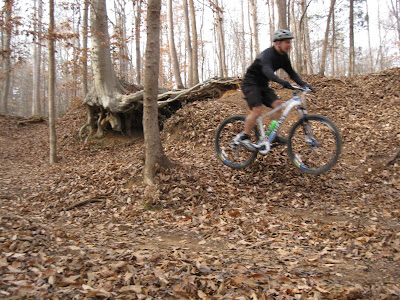 We headed towards the trail exit, but we were still enjoying the ride: 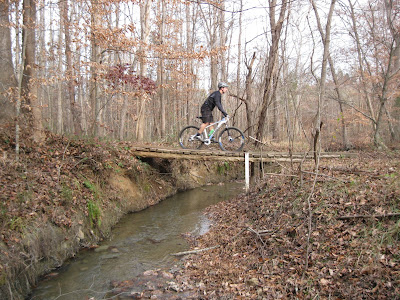 It was so nice and peaceful out there, and it was just what we needed after a long work week: 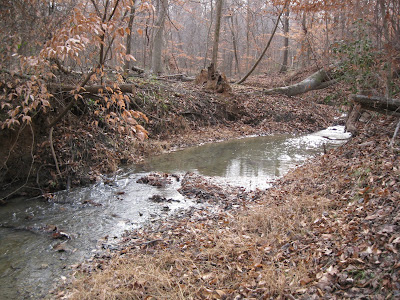 Oh yeah, it was still pretty cold though. This creek was frozen in some parts: 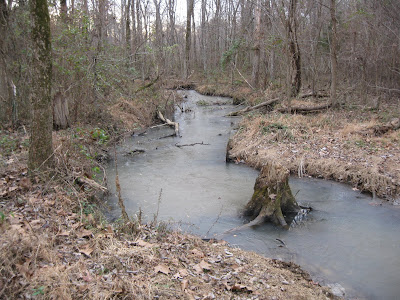 Yeah, I got out for a ride, and it everything was right again. This once a week shit is tough though, and it does nothing to improve my offseason fitness. I really have to get out during the week. I’ll either have to sneak away from work for a bit during the day, or venture out for some night riding. The little bit of nice weather we had was temporary though. It’s supposed to be cold as shit this week again, and if last night was any kind of indication, then I guess I’ll be freezing my ass off. Before I went to bed last night, this is what was going on outside: 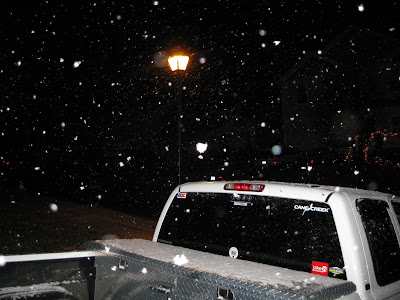 Yeah, Jack Frost has returned.
Posted by TheMutt at 8:54 AM