Pick Up Where I Left Off

Lap two started out great. I was climbing well and riding at a swift, yet easy pace.  It felt really awesome. With the group really spread out, I hit every single trail feature.  Some were difficult, and some were just plain fun. 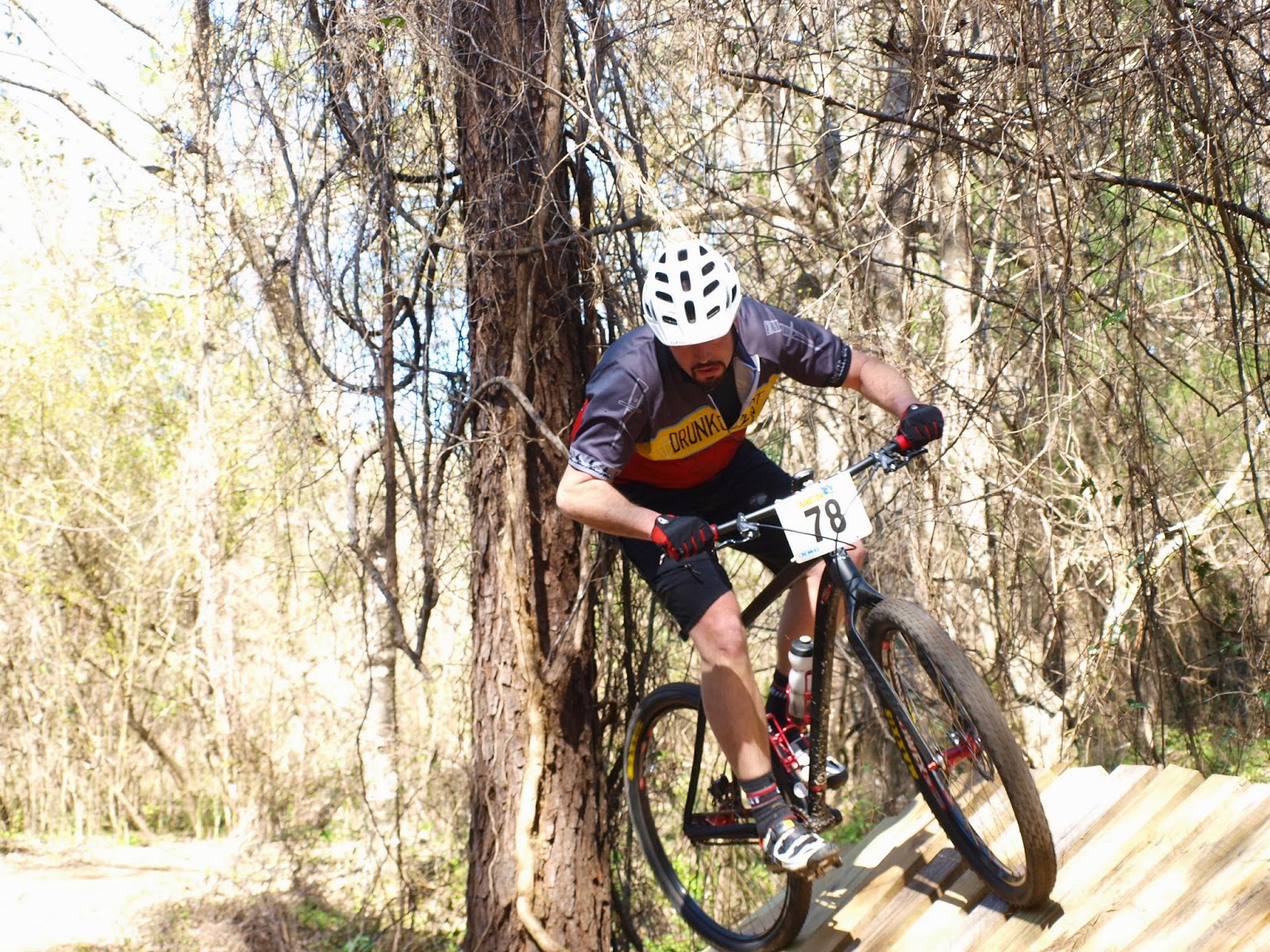 I did have a few issues though. My left foot kept slipping out of the pedal, causing me to almost pee a little every time I rode over some rocky shit.  “No worries” I thought, “I'll just check it after this lap.”  I knew I would have to stop anyway since my bottle would need refilling by then.  I kept pushing through the first technical section, and then it was on to the flat, twisty stuff.

“Not this shit again” I said to myself.

That's right.  I was bored already.  I didn't know how much spinning I could take, so I tried to keep it interesting.  Since I was on single speed and didn't want to wear myself out with a high cadence, I kept a sensible pace.  Every once in a while some of those fancy “pro” guys would come flying by (some polite and some not) and I would resist the urge to keep up.

Until this one time...

I saw a pack of four guys behind me, all of them yelling shit like “Rider back!” and “Coming in hot!” so I would let them by.  When it was safe I did, but since I this time I took off after them.  Mere seconds later I was part of their dirt roadie train, and I politely announced to them that I was there.

“Hey y'all.  So, this is what it's like to be one of those super pro fast riders, huh?”

I kept up for a while (it was actually kinda easy), but decided that I had better slow it down so I can survive the rest of the day.  They pulled away, and I had a feeling that I would see them again soon.  I was right, because after the flat stuff is a “qualifier” for the next difficult section of trail, and I had a hunch that they would have trouble getting over the large rock.

As I rolled up, I saw one guy had already crossed it (he was still off his bike), and the other three were in the process of dismounting to walk over it.  In my best dirt roadie voice I yelled, “Rider back!” and rolled right over the nasty, jagged rock.  When I cleared it I asked, “First time riding mountain bikes?”

No response.  I'm an asshole.

They passed me a few minutes later, and I was bored again. I finished the last technical section and made my grand exit. 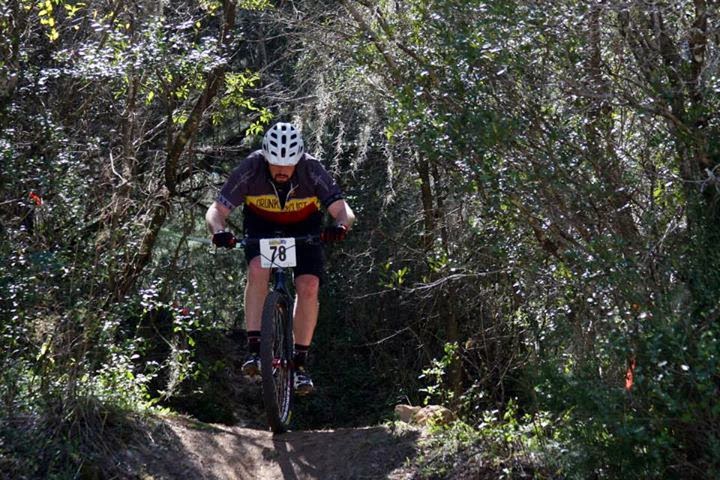 I stopped in my pit to grab something to eat and refill my water bottles.  Just then, Tom F. showed up and we chatted a bit.  What was supposed to be a short pit stop turned into a very long time.  I just didn't feel like going back out there even though my body felt great.  I had a beer, shot the shit with Tom for a while, and decided that I would get off my ass and go back out there.  Luckily, he offered to make a photographic image of me. 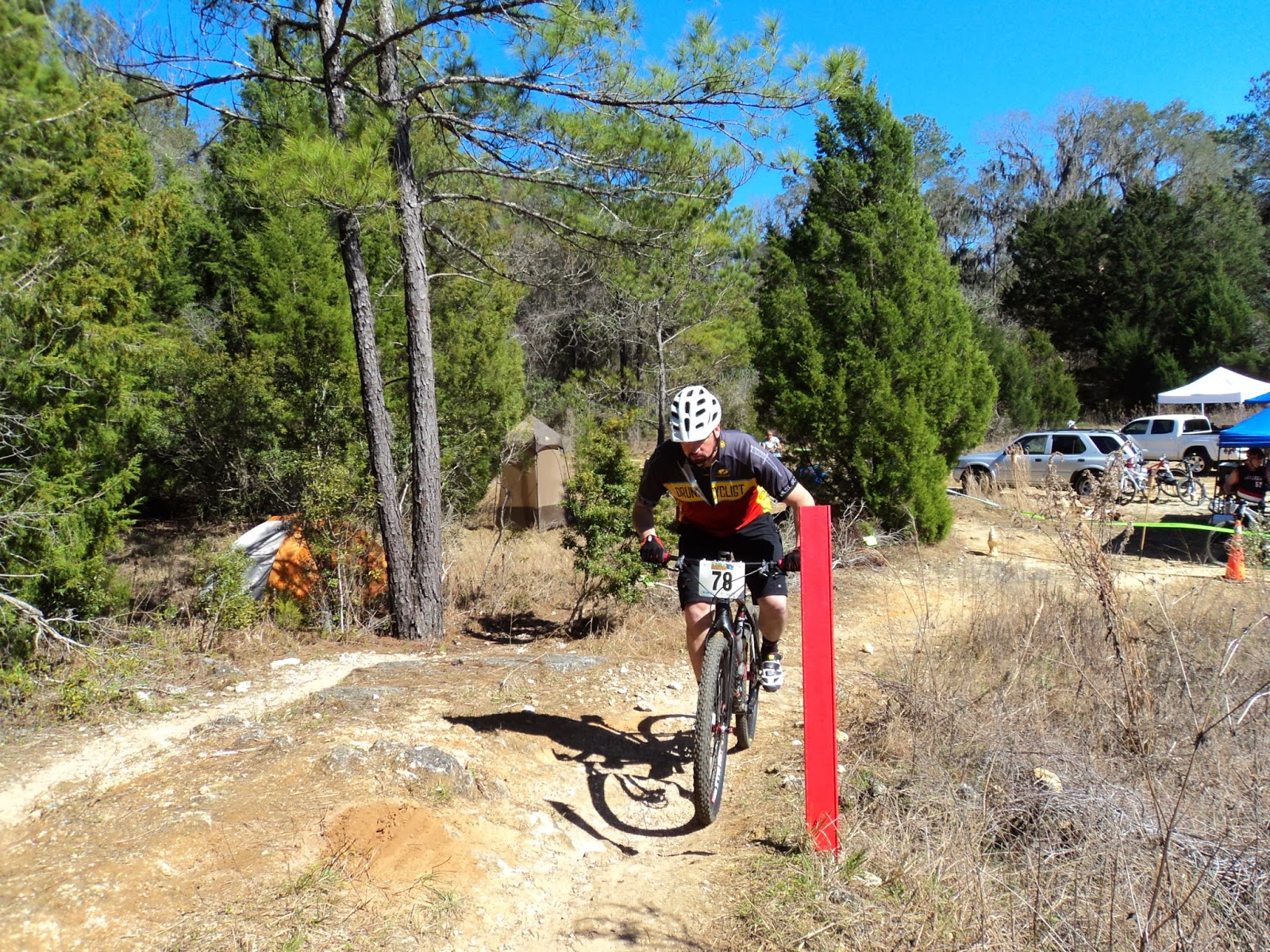 This lap didn't start off well.  My foot slipped off the pedal more than it stayed on (I forgot to check it), and for some reason I was really sleepy.  I doubt it was from that one beer I had, so I chalked it up to being bored (and not sleeping well the night before.)  I made the climbs and rode all the features again (which were still fun), but my heart just wasn't in it.  When I came out in to a clearing to start the flat section again, I spotted Tom standing there with his bike.  He was about to ride some more so I stopped, summoned him over, and asked if he wanted to ride along with me.

He did, which kept me going for a while.

We had fun laughing at the technically challenged dirt roadies, and even tried to instruct them how to pass with politeness.  Only a few of them were dicks, which was pretty good considering how many people were out there that day. Once guy though, needed to go back to the beginner class.  He came up, announced he was back there, tried to pass, and smacked right into Tom.  He looked like a fool, mostly because he wasn't paying attention.  Tom wasn't hurt, but I think that guy's Strava time might have taken a hit.

Eventually it was time to finish the lap.  I crossed the start/finish line and rolled back to my pit.  I checked out my pedal and noticed that I had broken the spring.  I had a spare set in my truck, but didn't really feel like changing them.  I was done.  My body wanted to keep going, but my mind didn't.  Usually it's the other way around, so I was confused.  I sat there for a while and thought about it, but I just couldn't bring myself to go back out.

No more racing for me.

I grabbed a beer and headed towards the scoring tent to pull the plug on my race.  On the way there, I say\w the Jacksonville crew (fresh off the six hour race) doing a little heckling. 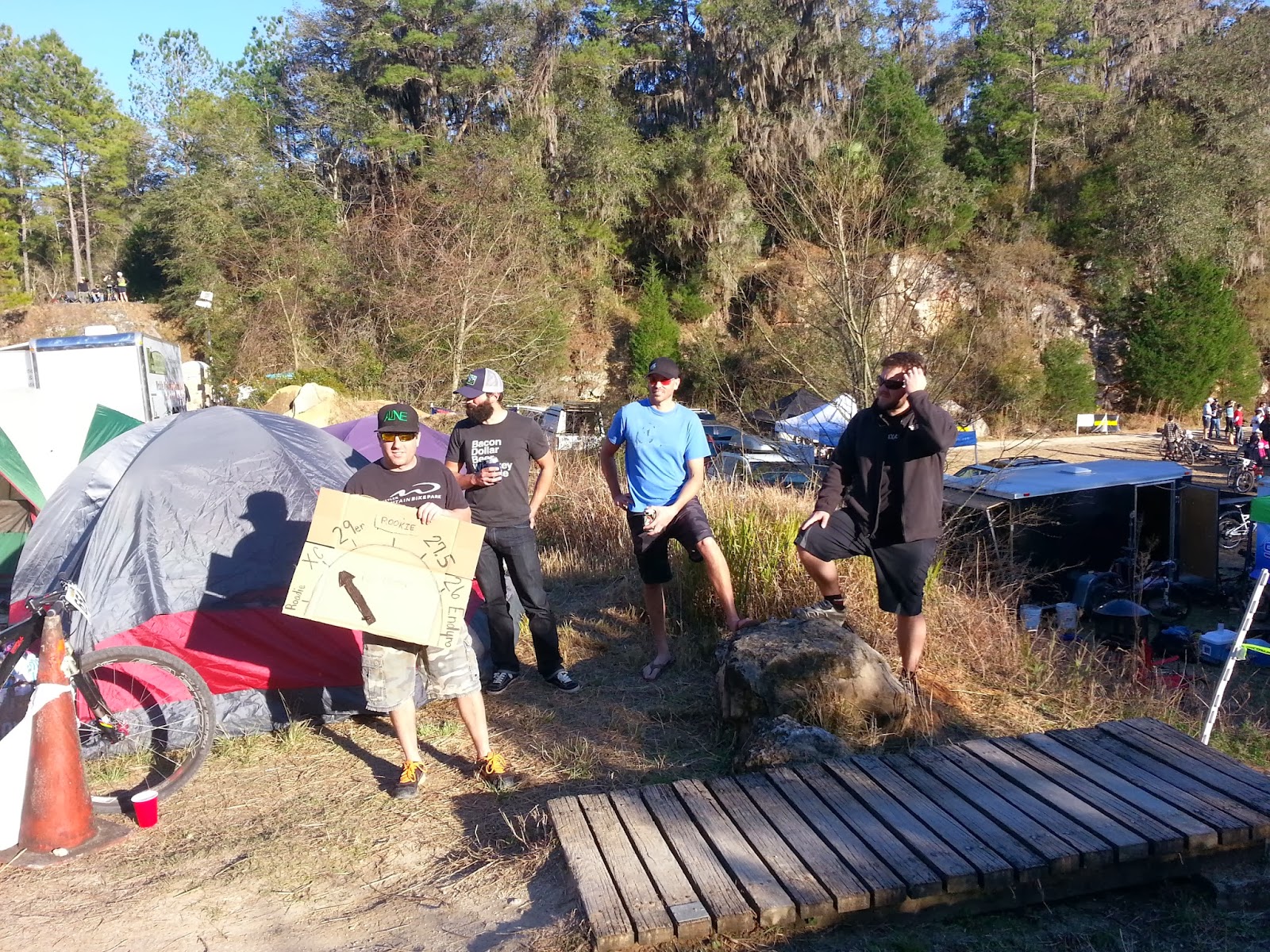 They made a sign, and while they camped out on the jump line they judged everyone’s ability to catch air.  The sign was awesome. 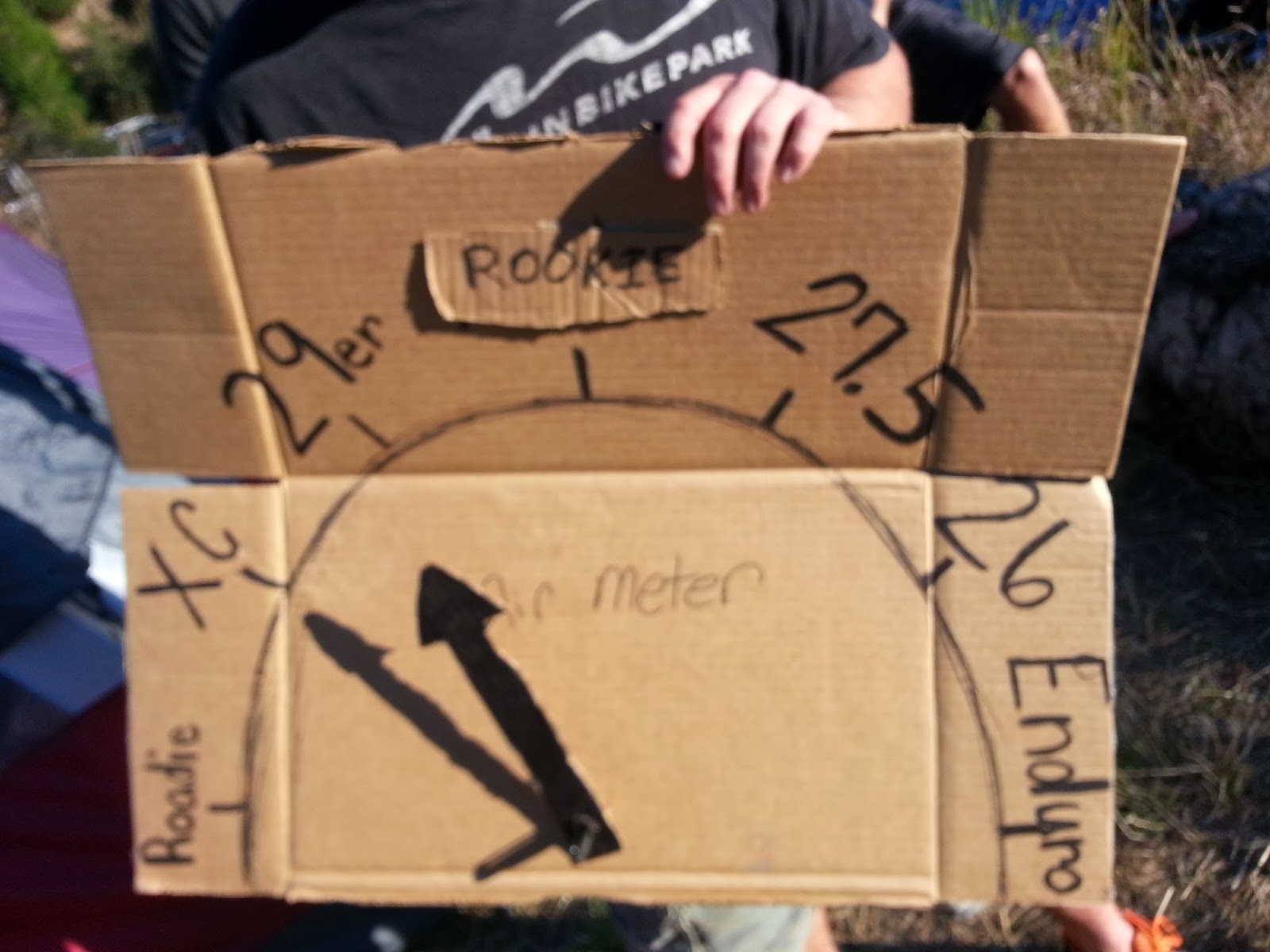 I sat there for quite sometime heckling right along with them, thinking that was where I belonged instead of racing.  Honestly though, even though I was having fun I didn't know what was going through my head.  I packed up my stuff and went out to eat some alligator with Tom at a local shit hole.  He offered up his camp cabin (with hot showers), so I stayed there for the night.  It was quite cozy. 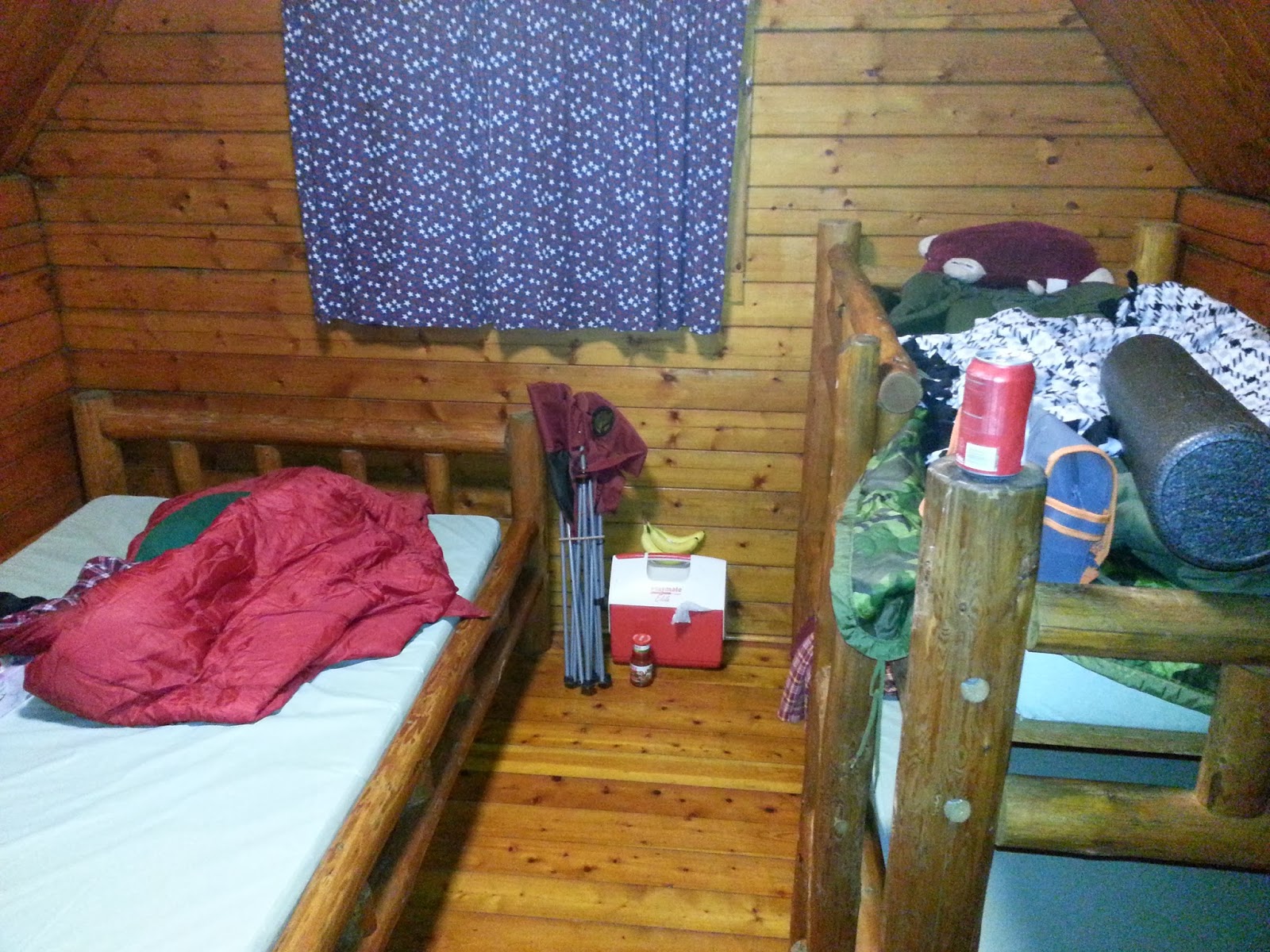 The next morning, I made the drive back to Charlotte in almost complete silence.  I had a lot of thinking to do, and some decisions to make as far as racing goes.  It was not a pleasant journey (in my head or on the road.)

I'll get into that tomorrow I guess.
Posted by TheMutt at 8:39 AM

Enjoyed giving dirt roadies a lesson in real riding eddy cat!
Interested in what your racing decision is. Hope it wasn't anyuthing I said.

I was hoping for moar violence, I am dissapoint.