Sorry, I kinda had to talk about it...

Week two of the short track races and our party is in full swing.  Eastwood was out of town, but we ended up with a pretty decent crowd at the “rock garden” to cheer, heckle, and party for the race participants. 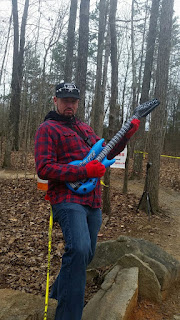 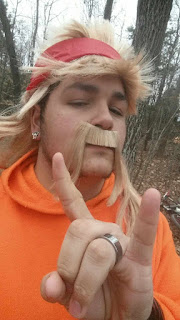 As far as the heckling goes, it’s par for the course out there.  Back when I raced in the series, I appreciated everyone at the rocks (and jumps) cheering and giving me a whole lotta shit.  That race is all about suffering, and having people yelling at you is a great motivator.  When I decided to stop racing it to focus on other events, we inherited the party in the woods and ran with it.

Once upon a time it was a little less tame... 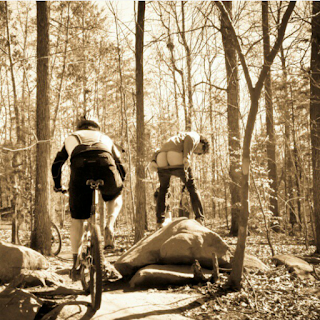 People still love it.  In fact, most people heckle us for not heckling them enough.  It’s all friendly, except that we give extra shit to our near and dear friends.  When they finish their respective races, they join us to continue the fun.  We’ve never had any issues, until this past weekend…

When some douchebag got butt hurt.

I’m not gonna name names (because he’s a little piece of shit and doesn’t deserve any recognition), but one particular individual had an issue with our cheering.  We were actually quite encouraging to him, but after a few laps he started yelling back at us.  A few people went at him with more heckling, and at one point he said he’d be back.

By that time, the party had dwindled down to only a few of us.  We were packing up to go watch “the big game” when he returned.  He hopped off of his bike and immediately started lecturing me.  Not sure why I became his target.  Maybe because the rest of the crew had split.  I dunno.  Anyway, I didn’t want to hear it.  I stepped over the tape, got in his face, but restrained myself from doing anything stupid.*

He started hurling some insults (and I gave it back at that point), but he wasn’t about to do anything else.  It was actually quite funny, especially knowing that I could have shut him up immediately if I wanted.

“NO ONE KNOWS WHO YOU ARE!”

“YOU'RE WHAT’S WRONG WITH THIS SPORT.”

He finally wised up and got back his bike, but still kept running his mouth as he rode away.  I "honored his achievements" one more time, and he was gone.  He was obviously suffering from extreme hurt feelz.

Our small group chatted about it for a minute, and we actually got a good laugh out of the whole thing.  He’s a nobody that maybe was once a somebody, and clearly doesn’t get it.  Or maybe I don’t get it, since I’m really what’s wrong with this sport.  Still though, I didn’t insult him until he came back and started shit with me, and he turned some friendly cheering (yes, everyone was nice to him at first) into a big deal.  All because he thinks he’s so awesome and no one should be able to talk about him.

He’s so bitter that he probably pisses pure lemon juice.

Really, I think he’s just mad because he finished his race behind this guy: 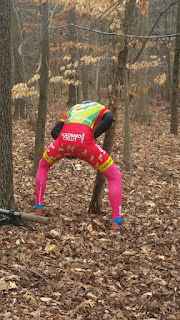 That’s an All-American right there, and everything that’s RIGHT with this sport.

I’m not bitter though.  I’m just gonna keep getting fatter and try my best to ruin everything.

I took one for the team, and now the team is getting ready for our own "big game."

*Dicky was over my shoulder like a guardian angel.  I didn’t want to resort to violence in front of him, which would have made him uncomfortable.
Posted by TheMutt at 8:16 AM

Awesome, I'm sure you definately had a effect on him finishing so poorly. Keep up the good work.