I've obviously been very pleased that I'm able to ride my bike again.  And not just riding a bike, but riding a mountain bike in the actual mountains.  I still hurt quite a bit and all that, but the joy of being able to pedal up in the hills makes it sting quite a bit less.

Continuing from yesterday, the little lady and I were having a most excellent time.  A good ride followed by great beer at an awesome bike shop wasn't quite enough though.  We heard from some of our South Carolina friends that they were in the area, and we planned to meet up with them.  With Little Miss Sunshine by my side and friends on the way, I basically wanted a repeat of what I did the previous weekend, with people around me this time of course.

And that meant a trip to Oskar Blues again. 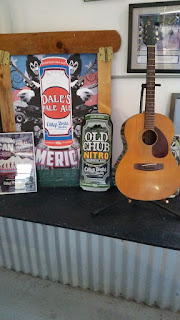 I've obviously been there before... 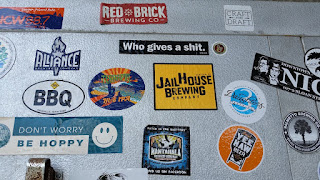 Our SC friends were still riding, and when they finished I got a text saying not to wait on them.  I said I didn't mind, because hanging around at a brewery was a very non-shitty thing to do. 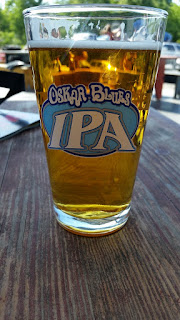 The little lady didn't mind one bit either because we were having a great time.  It was relaxing, but that was probably because of the beer.  There was a band playing too. 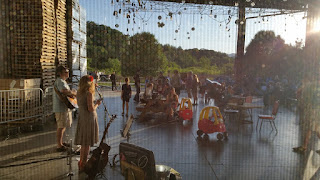 They were okay, but honestly I just wasn't really into their sound.  I watched a little of the guitar playing to see if I could pick up a thing or too and that's about it.  My mind wandered towards thoughts of playing my own guitar there one day.  Maybe that was beer thinking for me.

It was a prefect day for sure, and even though we waited a while for our friends it wasn't a big deal.  We watched as kids ran around having a great time, and even saw some people hang up a hammock in the middle of the crowd for some reason. 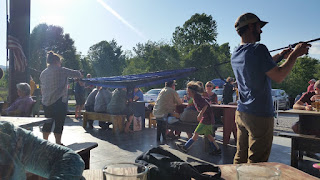 Not a great place for that, but whatever.

Our friends showed up after that, moar beer was consumed, and the shit was shot.  We had a great time for sure, spending about six hours there.  I knew we had been there far too long when the little lady started playing with the kid's toys. 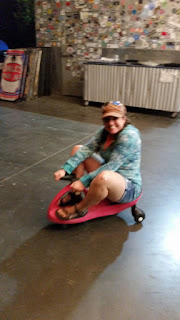 Yeah, we finally had to get out of there.  It was a really long day, but worth it in so many ways.  The drive home was tiring, and for a second I realized why we know so many people that have an additional residence up there in the hills.  We don't plan on doing that, but I definitely see where it could be beneficial.

I can see us being up there full time though.

Hey, it could happen.