I Took The Call

Last week after whining about missing the mountains, I guess I had to do something about it.  I knew it was gonna be a nice weekend and I didn't want to waste it.  My ribs were feeling better (again) so I made a plan to head west on Saturday morning.  The mountains called, but I didn't know which ones or even exactly what they wanted.

I got up early the next day, loaded up The Executor and headed for the hills.  I thought about riding The Pisgah and taking an easy-ish/short-ish route.  A bunch of my "friends" (I put that in quotes because I don't really have any) were out suffering all day at PMBAR and I thought it might be nice to see people I knew while I was out.  And then it hit me...

I really shouldn't be riding at all.

And then it hit me again...

I decided that an easier destination would be better and settled on DuPont.  I know that place very well, and I could make it as easy or difficult as I wanted.  I also knew the terrain well enough to figure out how much bouncing around I might have on my ribs.  I unloaded the bike, got ready, and studied the map for a minute to plan my day. 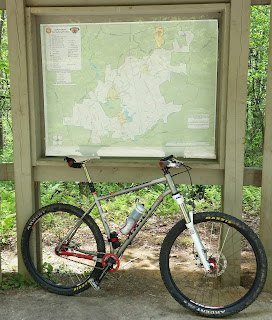 Okay, I sorta had a plan.  I wanted to ride.  I also wanted to see if I really felt better, or if my desire to ride outweighed my desire to be healthy again. 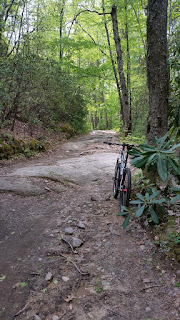 I started climbing up a steep fireroad, immediately testing my ribs with twisting and pulling while I stood up to climb.  I actually felt okay, aside from the fact that my lungs and legs were confused as shit.  I was definitely out of shape and had to stop a few times, but I was feeling pretty awesome.

After a while I started feeling like I knew how to ride a bike.  I was able to keep my breathing and heart rate under control too.  That made it moar better.  And as a bonus, I got to enjoy some of the scenery that DuPont is known for. 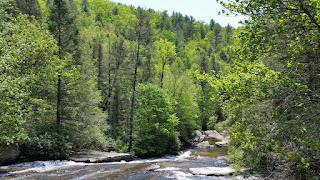 I'm not sure which asshole planned my route (it was me of course), but I ended up climbing quite a bit.  I felt like having to work so hard to make my bike go uphill was the perfect way to test the ribs.  Riding downhill is easy.  I can adjust body position and use my squishy frok to make things appear to hurt less.

But climbing on a single speed?  There's nowhere to hide. 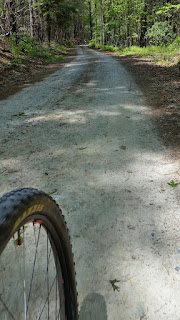 After wandering around for a while, I had all but forgotten that I was injured.  I felt alive again, instead of like some fat sack of crap that doesn't ride bikes for fun.  Next up was the final test, a trip down one of the bestest trails out there... 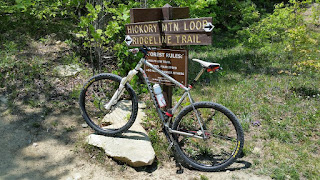 I was hesitant at first.  Mostly I was afraid of crashing, and it was apparent by my lack of bike handling skills.  It took a few minutes to feel confident again, and before I knew it I was flying down the trail, drooper post drooped all the way, ass of the seat, and having a blast.

And then things went to shit. 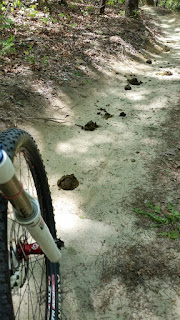 Normally, I get upset about some shit like this.  You know, because my bike doesn't drop a deuce on the trail and leave it.  That day I felt different.  I was happy to be riding again, and I had the skills to avoid riding through horse turds without injuring myself further.