I'm still on the mend but feeling good enough to ride.  That's two weekends in a row.  And for some reason I don't feel like riding local at the moment so I planned another trip to the hills.  Instead of going alone though, the little lady wanted to join me.

We ended up at DuPont again and I had an easy route planned.  It starts with a climb of course, which felt a little easier this time around. 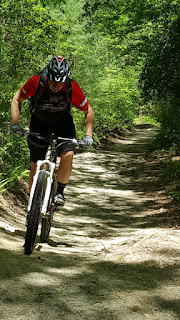 Actually, as radical as that photo might look it was actually very tough.  Since the little lady took the photo, she was obviously ahead of me.  I didn't mind though.  I'm on the mend, you know.

I did okay I guess.  After a few bouts of my legs protesting I sorta got into a groove.  Sure, we stopped a lot, but that was only to enjoy such an awesome day. 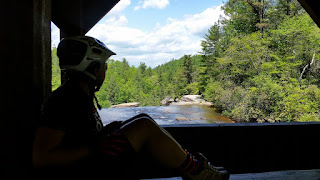 The route I picked had us doing lots of fire road climbing and a bunch of singletrack descents.  The best one of all, of course, is the Ridgeline trail.  I hurried down to get a shot of the little lady. 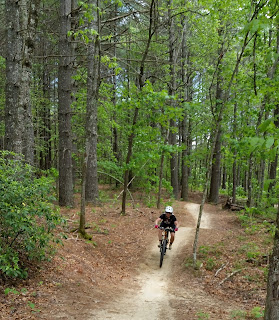 She had the drooper post engaged.  I am proud.

We were out there a couple of hours.  We did a few miles.  I don't know how much or how many exactly because I lost my Garmin the very beginning of our ride.  Who gives a shit.  We had an awesome day.

And made it moar awesome by stopping for a post ride beer at The Hub... 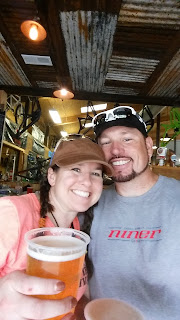 I gotta go do the working thing now.