Don't Let It Get Me

I didn't mean to sound all whiny yesterday but it's hard not to do so.  I have plenty of other things to do, but riding my bike is pretty damn important.  And the fact that I re-injured myself while not riding my bike is a major downer.  I know I'll eventually heal and be "good as new", but damn it...

Well, not against that guy.  He can't shoot for shit.

Anyway, I'm feeling a little better (again.)  I can move around much better now, mostly due to the fact that I sat around a lot and took pain meds (and beer.)  I'm hoping to get out and ride on the upcoming long weekend, so I'm on a self-imposed bike hiatus until at least Saturday.  In the meantime, I'm trying to enjoy a few other hobbies I have.

I took my new toy to a local park to get in some flying time, and I actually had a shitload of fun. 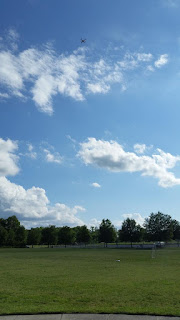 Nice open fields meant that I could fly that little bastard pretty high.  Since I'm not riding as much, I'm actually getting really good at this quadcopter thingy.  It's fun, and it requires minimal movement.  Well, unless I crash it (I do.)  That requires a little bit of walking to retrieve it.  Who gives a shit.

I also took advantage of my downtime to get back to a hobby I haven't enjoyed since...

Shit, I don't know.  It's been a while.  But luckily, I had some ingredients around the house to brew another batch of beer. 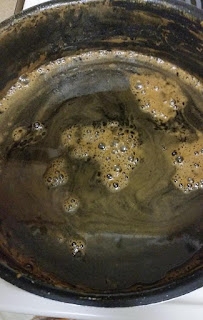 I know, I know.  It looks like shit.  That's how it looks.  When it's done in a few weeks though, I'll have a tasty Pale Ale that I made all by myself.  And if I'm still hurting by then, I'll have a couple of gallons of fresh beer to ease my pain.

At least I'm doing something I guess.  Something instead of whining about being broken.  I'm still down about it. Flying toys and brewing my own beer.  This ain't even the same fucking sport.  Ain't no ballpark neither.