I was really excited for the arrival of last weekend.  The little lady was heading out of town on an airplane to do a big bike ride with her mom in Buffalo.  My plan was to get out of work early on Friday, grab my bike and drive to Western New York.  A ten hour drive, a good nights sleep in a rest stop close by, and I would meet them bright and early to ride.  Little Miss Sunshine was concerned that I would be too tired and fall asleep, and honestly, I was too.

After a long week of work, I decided that I would just stay home and do something else.  No big deal. Although the little lady was disappointed, she was happy that I didn't risk death just for a bike ride.  Next year.

Instead, I started to make plans to ride in The Pisgah, since my ribs were feeling up to it.  All alone the Friday night before, I headed up to the local pizza place to relax. 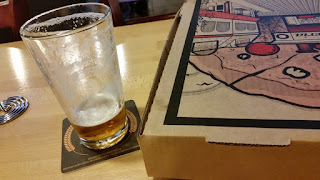 A night with all my friends.

I was in bed early. The plan was to leave early so I could catch my friends that were out there racing.  I woke up bright and early, and didn't want to get out of bed. Carl didn't either. 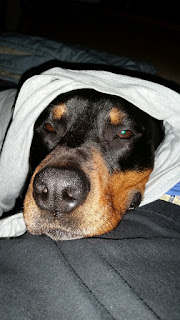 For some reason, my ribs hurt worse again.  I hobbled downstairs, fed the critters, and fed myself.  I told myself I would leave in a little while, but the time ticked by as the pain got worse.

Forget The Pisgah, I thought, I'll just go for a ride somewhere locally.

My energy was fading and the pain was getting worse.  I decided to plop down on the couch to rest.  I slept for a while (thanks pain meds) but I wasn't alone. 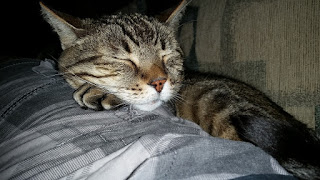 I woke up several hours later with plenty of time to ride.  The problem was, I felt even worse.  It felt like it did when I first got hurt.  I was mad, in pain, and...

Why?  Why the hell was I feeling better (and able to ride pain free), then suddenly thrust into intense pain from doing absolutely nothing?  My road to recovery has taken a sudden detour.  Quite honestly, this sucks.  I didn't know what to do.  With one more day left in the weekend, I hoped like hell that I would recover enough to do something on Sunday.

I spent the rest of the day sulking and feeling pretty down.  I wish things would get better.

My Grandma used to tell me, "Wish in one hand and shit in the other to see which one fills up faster."

Good advice, especially since I feel like shit in more ways than one.