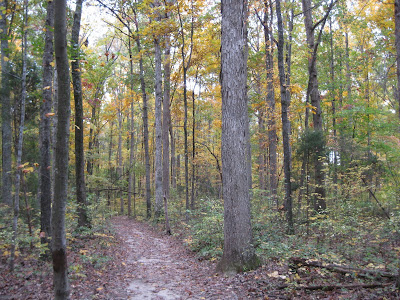 The leaves, they are a changin'


Contrary to what you may have been thinking, I actually rode my bicycle this weekend. While Saturday was filled with work and other nonsensitude, Sunday was a whole different story. The original plan was to wake up at a decent hour to ride at Little Miss Sunshine’s favorite trail, North Meck. Well, as you know, things can change around here in a hurry. Lunchbox got a call with a reminder from a friend that he was invited to a birthday party, scheduled for Sunday at 11:00 a.m. This party was a skate party, just like the one we had for him (minus the kitty litter cake of course.). Since we were all planning to ride at North Meck, a decision had to be made. Lunchbox had spent nearly all day Saturday at Soul Ride, so he didn’t really have the urge to skate. He really wanted to go mountain biking with us, but he also wanted to attend his friend’s party. He decided to go to the party, so I dropped him off at the skatepark at 11:00 a.m. sharp. I left him with enough money to spend a few hours there (in addition to the two hour party.) I stuck around for a few minutes before returning home to pick up Little Miss Sunshine and our bikes.

Little Miss Sunshine was dressed and ready to go when I got home. We loaded up the bikes, grabbed some water, and headed up to Huntersville for some nice fall riding. The air was crisp, even a little on the cold side. There had been some rain the day before, but the trail appeared to be in great shape. We played around on the pump track for a few minutes, and then we hit the trail. I let Little Miss Sunshine lead the way, so I wouldn’t be tempted to go too fast. It didn’t really matter, because she took off at a good pace. She tore through the trail like a seasoned pro, enjoying all of the twists and turns. She especially likes the little jumps out there, calling them “weees.” (Like weeeeeeeee, get it?) We stopped a few times here and there, which was good for picture taking. I got ahead of her every once in a while to capture some “action shots.” 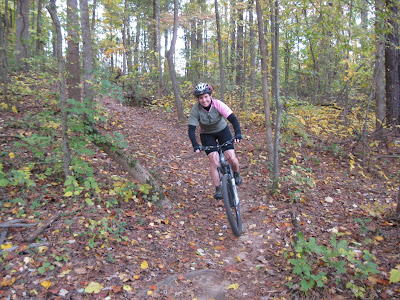 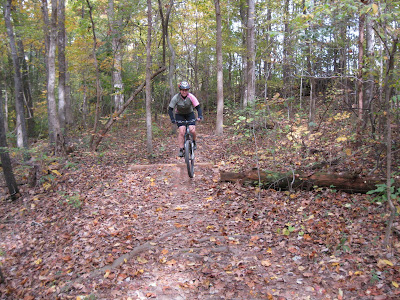 Here is a weeeeee! 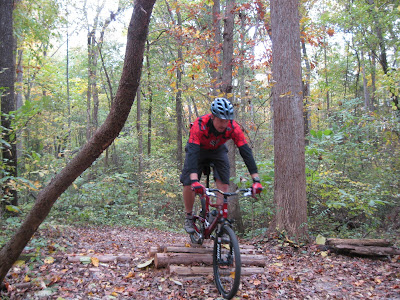 Here’s your proof that I rode my bike.

The trail was in awesome shape, the only exception being the leaves on the trail. I may make some time soon to visit the trail there with rake in hand to alleviate this leafy issue. While we had a great ride, I also had another fun thing to do out there. I stopped a few times here and there because I found some trash on the trail. This trail is only 3.5 miles or so, and I didn’t understand why people couldn’t carry their trash out with them. There are several neighborhoods nearby, so that’s even more of a reason to not be a litterbug. Since I had no backpack this time, I had to use all of my available pockets. 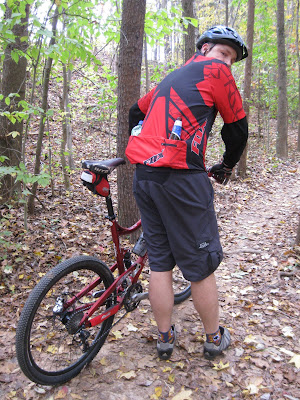 Yes, that’s a beer bottle. No, I didn’t drink beer on my ride. Only post-ride beer for me.

The beer bottle puzzled me most of all, since there are no fishing holes, no NASCAR races, or even a decent place to party in this trail. I like beer as much as the next guy, but I don’t see why you need to discard your bottles on the trail of a county park. It’s not like people were camping out there or anything. There are plenty of places to dispose of garbage at a facility like this. 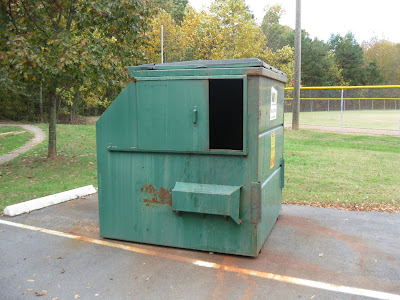 How could you miss this thing? Maybe it blends in with the trees. 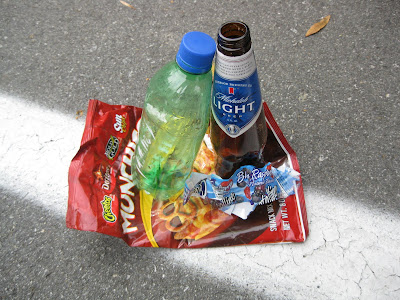 Here is a sampling of my trailside treasure. 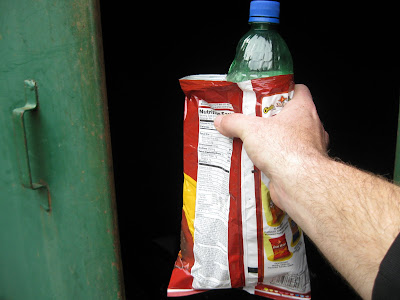 Look how easy this is.

See how I made a difference? Geez, just pick up your trash, okay? Never mind. Why should people pick up after themselves when they have people like us to do it. Is this what our society has come to? I like being outside in the woods on my bike and enjoying nature. I don’t like having to pick up after litterbugs while I am enjoying said nature. I wonder if they just throw trash all over their own yards. Probably. Okay, rant over. For now. 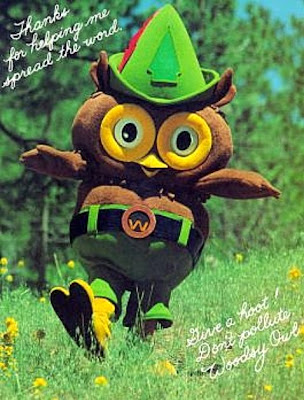 Don’t make me send in Woodsy. He’s a real badass.

P.S. I noticed that yesterday was my 43rd post. Oh how nice.