New Addition to the Family 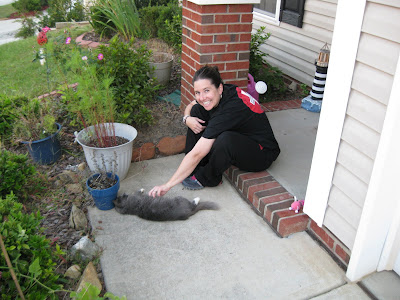 No, the Stork didn’t pay us a visit. I’m talking about a new animal added to our herd. I came home from work last Friday, and I saw Lunchbox, Little Miss Sunshine, and a bunch of kids in my driveway. I didn’t think much of it as I parked on the street. As I walked up, I saw everyone gathered around a little kitty. Apparently, this little thing had followed Lunchbox to our house. She was basically a spine with fur, and she couldn’t even meow. I guess she was pretty sick. We gave her food and milk, and lots of attention. Since we already have two dogs and three cats, we wondered if we could keep her. We decided to keep food outside for her and visit with her when she comes around. It was obvious that she didn’t belong to someone, since she was near starvation.


As each hour passed since initially finding her, we all grew more and more attached. She eventually started meowing and also purring, which I took as a sign that she is getting better. She really seemed to enjoy people and all of the attention we gave her. Little Miss Sunshine said that she would take the little kitty to the kitty doctor for shots and other proper veterinary care, as long as she is still around after work on Monday. LMS called the vet, and they had an opening. When she got home, kitty was nowhere to be found. After a little searching, our new fuzzy friend was located again. She was placed in the cat carrier, and off to the vet they went. Well, after about $200 later, we have a new family member. She had an ear infection, and there is the possibility that she may be pregnant. We’re waiting on the test results for that one. They estimated her to be around 9 months, although she was small for her age. Well yeah, I’m sure she was since no one decided to feed and take proper care of her. Lunchbox decided to name her Green Bean, but we’ve just been calling her Beans. 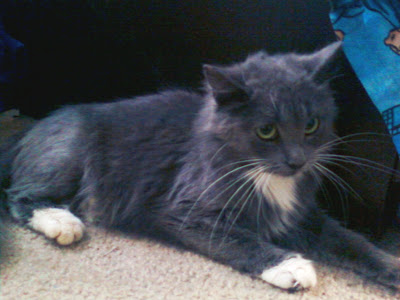 Now little Beans lives in our garage. It’s temporary until we slowly integrate her into the zoo we currently inhabit. I came home from work yesterday, and Lunchbox had the little thing in his room, and she just sat there and watched him play. She did however mistake the corner of his room for a litter box at one point. She hung out in there for a while, and then it was back to the garage. She’s never alone in there for long though, because we are always checking in on her. Last night after dinner, I brought her out of the garage again, and she sat on the couch with me for a bit. She never moved, and she just seemed happy to have someone to take care of her. I’m happy we saved this little kitty. Welcome to your new home, Beans.

You see, it doesn't always have to be about mountain biking. More on that tomorrow anyway.

Look into her eyes, she's planning a coup to overthrow Paul as dominant cat of the House