Image used without direct permission of Charlotte Sports Cycling, but I’m giving them free advertising. That should be enough, so step off.


First of all, I want to apologize to you, my loyal readers, for disappointing you yesterday. I know you all fired up your computers, headed over to the fabulous B-43 Blog, and noticed that there wasn’t a new entry. I have been trying to blog every day except weekends, but yesterday was like a weekend to me. I took the day off for some much needed R&R, so I could come at y’all with complete freshness. Yeah, I had Sunday off also, but I needed more than just one day of recovery. The Tree Shaker was hell, my friends.


As you can guess by my usual weekend pattern, Saturday morning started out early again. Little Miss Sunshine headed out a little earlier than Lunchbox and I so she could help with some volunteer action. She was the official medic/neutral food support organizer, so she had a lot to do. Me and the youngin’ packed up Goose, Clark, and a cooler full of beer (everything else was packed up the night before.) After a quick stop at the store for ice, we headed down to Fort Mill, South Carolina to the Anne Springs Close Greenway. We arrived on the scene sometime before 8:00 a.m., with plenty of time to set up camp, I mean our pit area. Doug was already on the scene and graciously located a spot for the tent and junk. The Dirty Party Cycle arrived a minute or so after I did, so we all pitched in to get our area ready. Everything went according to the plan (really, there was a plan?) 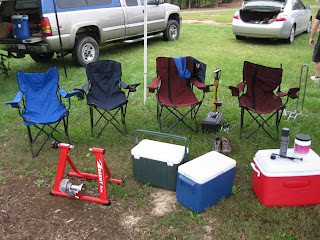 Two of those coolers contain beer, the other one is food. We have our priorities straight.

After everything was set up to our liking, we headed on up to the barn for the pre-race briefing. There was a huge crowd, full of racers of all ages and abilities. At that point, I really wondered what I had gotten myself into. I’ve watched a lot of these racers at past events, and I didn’t think we had a chance. There were 14 three person teams, so a podium finish was going to be tough. Did I mention that we had a lot of rain the night before? The course was going to be slick, so those tough climbs and downhill switchbacks were going to be difficult to navigate. We all said screw it, just go ride as best you can. We decided that as a team, we would give it our all, and see what happens. Our goal became just to finish, that’s it.


Along with being nominated for team captain, I had also been selected to start first, followed by Doug and the DPC. For some reason my teammates figured I would be faster t the start, since the pack really turns it on at the beginning. I wondered why they took off so fast for a race that lasts so long. Anyway, we were each to do one lap, and hand off the timing chip before the start-finish line (near our pit area) so we could avoid the masses and their seriousness. The approach to our pit area was a long gravel road, so it would be easy to see our teammates. I was ready to go, and my teammates were standing by. 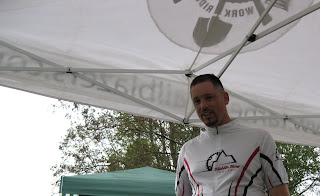 Is that a little nervousness I am feeling? 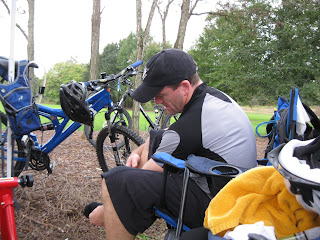 Doug would be ready to meet me at the rendezvous point. 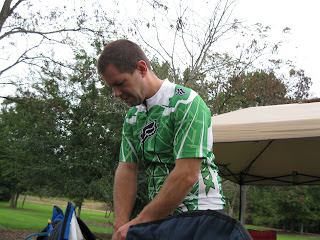 The Dirty Party Cycle was the anchor, and he was filled with determination.

We started way down on the gravel road, so the field could spread out a bit. Just as I figured, everyone took off like bats out of hell. I tried to stay with the main pack, and I planned to settle into a good pace when I hit the singletrack. 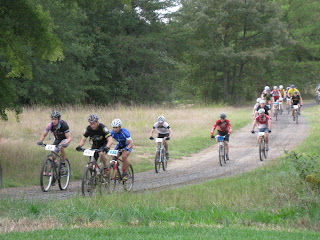 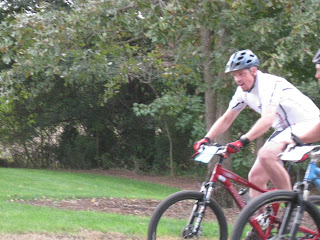 Here I am. Lunchbox wasn’t ready for my high rate of speed.


We climbed a small hill to cross the start/finish line, and we hit a little grassy downhill section leading to the trail entrance. When we got onto the singletrack, the pack was still pretty tight. The trail was slicker than dog snot, and very difficult to maneuver. I pushed as hard as I could, with no regard for my poor choice of tires or my own safety. One rider went down in a corner, and took out two guys in front of me. I pressed on, hoping to take advantage of my newfound positioning. I hit the next corner at a ridiculously high rate of speed, and I slid out. I had to unclip my left foot and dab a little, so I didn’t fall at least. That did scare me a little, and from then on I became more cautious. I started to settle into a good pace, and maintained my position on the trail. I saw a lot of accidents, but I didn’t participate in any of them. After that first section, the trail opened up to a fire road. It was full speed ahead again, until the next set of twisty turneys. I nearly went down again, but my dabbing skills rescued me once more. I became more worried as the first lap went on.


Next up was the notorious Sugar Loop, which is a nightmare of climbs, roots, and the special for today, mud. I hammered up the climbs, but I lost traction several times. I had to hop off and walk one big climb, or else I would have fallen backwards. The roots were really the big story here. They were soggy, and threw off my mo every chance they could. I went through a couple of tunnels, crossed a whole lot of bridges, and eventually got into a rhythm. The trail meandered along a river bank at one point, and I nearly slipped off into the drink a few times. After another big rooty climb, I headed up to the gravel road to find my teammates waiting. 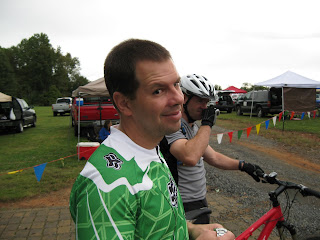 Doug is poised for his next lap, while the DPC was there for timing chip handoff assistance. 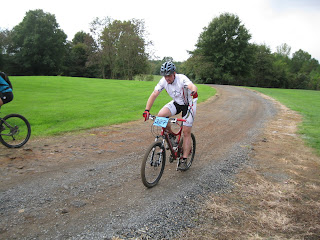 I pulled off my chip and handed it to the DPC for the exchange.


We had to have a quick handoff, so I didn’t really have time to properly inform Doug about the trail conditions. I told him, “One word. BlackIceDeathRoots.” He understood. The DPC and I watched as Doug went out to conquer the slick rooty goodness. I wandered over to the tent and changed my clothes. It was time to relax and eat a little, and also to brief the DPC on the trail conditions so he would be ready. I was hoping that the trail would improve with so many riders packing it in, but we neglected to pay attention to the weather conditions. It had started to rain a little. Shit. This will complicate things. It was only a brief shower however, so nothing to worry about. I went right back to relaxing. 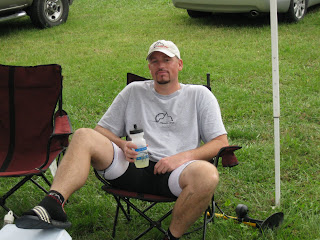 
After Doug returned, we had a chance to discuss the trail. The DPC was out on his first lap, hopefully with improved conditions. Doug seemed to have the same experience as I did, and it bears mention that he is running the same tires as I am. We both ride Kenda Small Block 8tires, which are meant for hardpack or dry conditions. We both figured that the DPC would fare better, since he had a more aggressive tire. The pack had spread out a lot, so there was less chance of a collision with other riders. That was one positive thing for us, I guess. 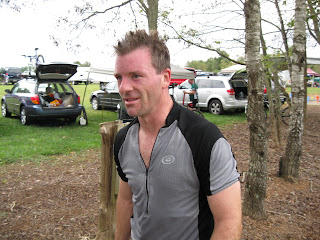 Doug tells the tale of BlackIceDeathRoots.

After about 45 minutes, we headed to the gravel road to wait for the DPC. I had eaten plenty of food and taken in lots of fluids, so I was ready for lap number two. The DPC came in at around 55 minutes, which was right in line with all of our lap times. We had better step it up for the rest of them. 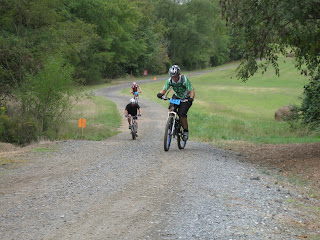 DPC making his final approach from his lap number one.

Well, lap one(for each of us)was in the books, and we survived. It was going to be a long day, but at least we knew what we were up against. We all knew we could finish the race. The Tree Shaker was in full swing, and we were definitely shaking some trees with our haphazardly style of riding. After three laps, we were sitting in 11th place overall. Team Suffering was in the house, and we were there for the long haul. Speaking of the long haul, that’s all for today folks. Come back tomorrow for more fun and suffering. I can’t spill all the beans today, can I?

Nice Pics man,thanks for documenting oru adventures large and small. Gawd am I slacker - I have a nice camera and let it sit, I need to tie it around my neck and force my self to use it haha.