Eye of the Tiger

Who the hell trains like this for a bike race?


Not me, that’s for sure. I know I mentioned a while back that it was really too late to “train” for the Tree Shaker, since it's too late and I already have a pretty good base of “cycling fitness.” At this point, all I can do is maintain my current level, or maybe even taper off a bit to give my body a rest. I’m still a little worried (read: obsessed) that I am not ready for an endurance race. My only comforting thought has been that I can ride my road bike as far as I want, and I never seem to get worn out. Of course, I have been limited on the road biking since I’ve had so many mechanical issues as of late. Nevertheless, I felt some honest to goodness mountain biking was in order. Just get out and ride, with no stopping, ever (at least during the ride.) Maybe a new bike is in order. 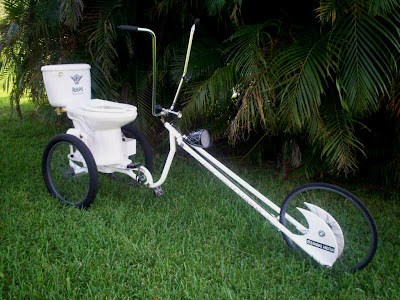 “At least I won’t have to take bathroom breaks.”


Yesterday’s post was all about the IMBA Take A Kid Mountain Biking Day, and nothing else. I thought it deserved its own post, since the ride was such a big deal. However, that wasn’t the only thing on the weekend agenda. I mentioned on Friday that the Dirty Party Cycle and I were planning a mountain bike ride at one of the most fun trails around, Poplar Tent. Plans were confirmed, so we met up early in the a.m. for some cool fall riding. He didn’t seem to mind that I was late, even though I live about 10 minutes away and he’s about an hour from there. He’s a great friend, but I still feel bad that I left him waiting at the trailhead. And to think, he and Doug both nominated me for “Team Captain” at the Tree Shaker. Anyway, I finally arrived on the scene, and we hit the trail. We started out at a nice slow pace, but that didn’t last long. As we warmed up, we picked up the pace a bit. Poplar Tent is pretty technical, with lots of roots and switchbacks. It made for a fun training ride. I tried not to look at it as a training ride. Instead, I thought of it as brushing up on my skills, especially since I have been riding on the road so much lately. I left my heart rate monitor at home, and I didn’t even turn on my bike computer. I didn’t need any data to analyze. Just pure, unadulterated singletrack fun. 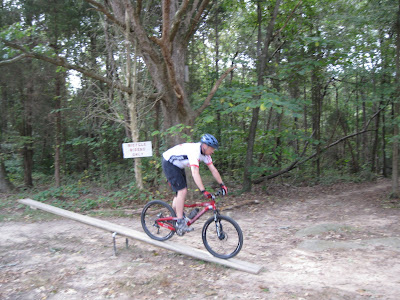 “They even have a playground!” 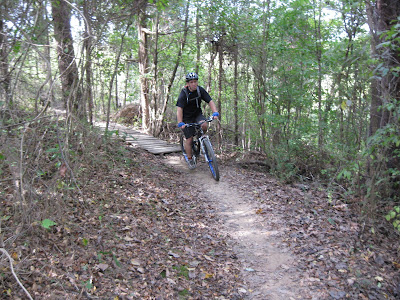 The DPC makes his first photo appearance for the B-43 squad.

Lots of fun was had, with only minor inconveniences. I had one small mechanical issue. My Cane Creek headset had worked itself loose, causing a little wobble in my fork. Of course, this is not the fault of the fine folks at Cane Creek, since their products are the best (yes, it’s a shameless plug.) The DPC had the same issue with his headset, at roughly the same time. I concluded that it was in fact the mechanic’s fault, since we both have the same guy wrenchin’ on our bikes. Oh yeah, that’s me, by the way. I can chalk that one up to lack of maintenance, more than anything. Headsets were adjusted, and we were back on our way. All in all, it was a great ride. We did two laps out there, and only our individual time constraints kept us from doing more. I felt like I could have ridden all day. Let’s hope that’s how we feel on Saturday. We’re all actually feeling pretty confident about the Tree Shaker, like we can actually win the damn thing or something. Yeah, maybe if we’re the only team that enters the race. If we do win, I’m buying Little Miss Sunshine that new bike she’s been eyeballing. 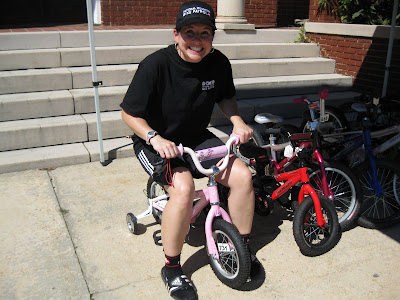