In keeping with my theme of change, I decided that it’s time to recap another change I made a while back. While it might seem like I’m a little slow posting this, I’m actually just catching up. I missed a lot of prime blogging opportunities since I started this thing, but that will be no more. After two faithful years of riding with Shimano PM-520 clipless pedals, I thought I had found true pedaling happiness. I was content to keep the same pedals on my bikes into perpetuity, but as you know, things change. 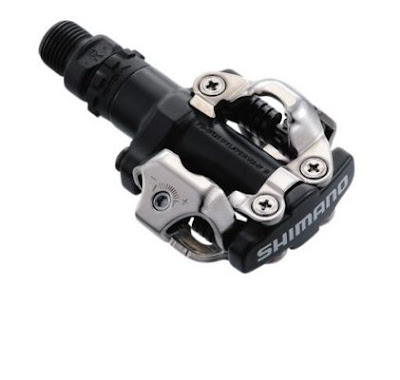 Out with the old.

Back at one of the first Charlotte Mountain Bike Summer Series races, I got into a discussion from some of the members of the Kenda team. They were talking about their pedals and the benefits of those pedals, so I listened carefully. These guys were a real team with mega-ginormous sponsors (unlike us misfits here at B-43), so I figured that their experiences were worth a listen. The big buzz was about Crank Brothers pedals, about which I knew a little. Sure, they were sponsored by Crank Brothers too, but they seemed to believe in their products.

The Dirty Party Cycle and Shepherd2LostSheep both utilized pedals from Crank Brothers, so it was strange that I never tried them before. The DPC was the most recent convert, and he’s had nothing but pleasant things to say about his new bicycle accessory. The few times a year that Mr. Shepherd makes the trek from the Sunshine State up here to North Carolina gave me ample opportunity to admire his pedaling assistance devices, but I never gave it much thought other than that. I am usually committed to the parts I currently use (stubbornly I might add), and I’m not usually one to change the status quo. Mostly I would just say, “I should try those.” It rarely went any further than that. I am always willing to give honest reviews to my cohorts however, but I never insist that they try anything I use. I just sort of hope that they do, and they can share my joy. Now the shoe would be on the other foot (or pedal), so to speak.


Now, back to the discussion with Team Kenda. After that evening’s race was completed, we did the usual tearing down of equipment while engaging in small talk. We were gathered around someone’s bike that had a pair of Crank Brothers eggbeater pedals, and someone mentioned these odd contraptions. I didn’t foresee me ever wanting to use a pedal without some kind of platform, at least a tiny form of one anyway. One of the Kenda riders brought over his bike and showed us his Crank Brothers Candy pedals, and I took immediate notice. After all, these were the same ones that were used by the DPC and Mr. Shepherd. That night I heard about the pros and cons (not many) of these fine pieces of hardware (from real, sponsored racers, no less.) I decided at that point that it was worth a try. I immediately started to shop around for a deal. 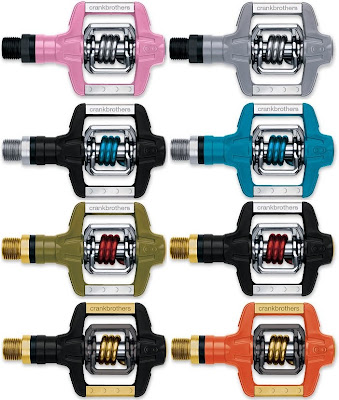 Although I’ve had prior experience with Crank Brothers, it was very limited. I had a pair of their 50-50 platform pedals, back when I thought I needed flats to ride really technical terrain (I was such a sissy.) I really enjoyed those pedals, but I didn’t want to switch out my pedals every time I rode something “challenging.” That’s when I went to full-time clipless pedal status. Since Lunchbox has no desire to try clipless pedals, he inherited the 50-50s. He’s been riding them for nearly two years now, with no issues. That was a plus for me as far as Crank Brothers was concerned. I knew at this point that the quality of their products wouldn’t be an issue.


A few weeks after the aforementioned post-race discussion, I found a set of Candys at a reasonable price (in red to match my bike even.) I was going to see what all the fuss was about. If anything, I could turn around and sell them if I didn’t like them, since there are plenty of Candy-loving mountain bikers around here. I installed them on good ol’ Goose, and changed out the cleats on my shoes. After a few “neighborhood tests”, I was ready. I went on a ride that weekend, and I was more than pleased.


After benefitting from the adjustable release tension of the Shimano pedals, I worried that I would have issues unclipping from the Candys. The Candy pedals don’t have any tension adjustment at all. It was never a problem though. The entry and exit were both smooth, and I immediately fell in love with my new pedals. The entry was the weirdest part however, since I didn’t get the usual “click” that I had experienced from the Shimanos. That took a little getting used to, but it was a minor adjustment. Even the rare instances that I rode in the mud proved my new pedals superior. While I was riding in the Sunshine State over the summer, I got to test out the famed “mud-shedding design” of these fancy Candy pedals. It rains pretty much every day in the summer down there, so if you want to ride, you ride no matter the trail condition. I was impressed yet again, and these pedals were far better during inclement weather than my previous ones (yes, even the flats.) Even the constant beatings they take from all of the rocks around here have done no harm at all. 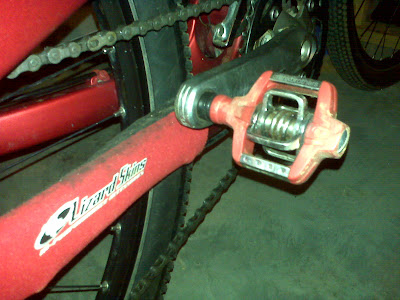 "Oh, did I let some Lizard Skins action slip in there too?"

Well, it looks like I have discovered a new-found love for yet another change I was hesitant to make. Maybe one day I will learn that change is good, especially if I initiate it. I was so impressed with these pedals that I put a set of them on my road bike as well, and my “commuter” bike will soon be fitted with some form of eggbeater-style pedal. I’ve even begun looking for a set of pink ones for Little Miss Sunshine’s still unnamed KHS. In conclusion, Crank Brothers makes quality products, at least in my experience. They sell rebuild kits on their website, and that task seems easy enough should I ever need a rebuild. I am proud to place them on my list of “Click These and Give Them Your Money.” While they are not a sponsor of me or anyone else on the B-43 team, I will still support them. And no, this isn’t a way to whore myself out for sponsors. I support a company’s products if I use them, whether or not they support me directly. They are supporting our team with quality products (even though we pay for them), and that’s good enough. Go get some Crank Brothers !