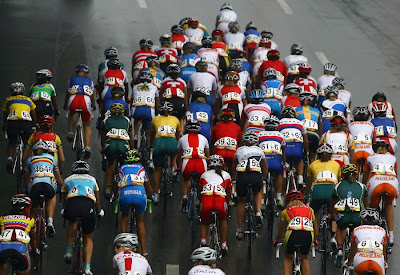 I would like to tell you that I had an exciting and competitive road ride last night, just like the photo above would indicate. Unfortunately, that wasn’t the case. However, I did take a road ride after I got home from work. I wasn’t a part of some huge group ride, nor did I get to ride with even one person, like this. Hell, I would have a great story to tell if I got to follow behind this group. Nope, I didn’t even see another rider last night (that’s what I get for riding on the road so late in the evening around here.) Just a regular, old fashioned, solo hammerfest, not too far from home. The real story here is how I managed to finish my ride, without any mechanical issues (read: broken spokes.) I really pushed hard for my “training ride”, but I was nervous the whole time about my spoke epidemic. Of course, like I always do, I was thinking the worst. What if more than one spoke broke this time, causing me to crash at 25+ miles per hour? What if I broke a spoke on the front and rear? No issues this time though. In fact, as I crossed the halfway point of my ride, I eventually settled down a bit. All I could think about after that was the Tree Shaker, and how boring it is to ride on the road. It almost sounds like I was wishing for a problem to take me away, like Calgon used to back in the day. Nevertheless, I completed my “training” for last night, and I guess it was fun. It was fun to finish the ride, rather than having to get scooped up by Little Miss Sunshine’s Rescue Wagon like last time.


In other non bike-related news, I saw an interesting story yesterday. The web site RottenTomatoes.com put out a list of what they call, “a list of the absolute dredges of cinema over the past decade.” "Worst of the Worst" is their title. So let me get this straight, someone took the time to rate the worst movies of the last ten years, and rank them according to suckitude? I’m in. As I perused the list, I saw several movies that I’ve watched already, and a few that made me say, “Hey, I liked that one.” Yes, I realize that movie critics don’t speak for everyone, especially me in most cases. I found a funny quote out there on the Internets that pretty much sums up critics:

“Movie critics are, by definition, folks with strong opinions about movies. But opinions are personal and subjective, so usually critical response to any movie is split between the positive and the negative. Still, there are a few extraordinary films every year that unite reviewers. When they all uniformly praise a movie, it's probably close to a masterpiece. When they all hate a flick, it probably stinks worse than week-old Limburger.”

By the way, where can you actually buy Limburger? I wonder, because if it smells so bad, then who the hell would be selling it? I digress. Here is the challenge. Well, not really a challenge since I’m not putting a time limit on it. I will make an attempt to watch all of the movies on this list unless I have seen them already. There is a catch to that though. If I haven’t seen one of these since the beginning of the year, or if I’ve watched one and can’t really remember it, then that calls for a repeat viewing. I hope the fam is willing to suffer along with me. Hell, I probably own a few of them. For the others, I guess I’ll be filling up my Netflix list. I’ll see just how bad these “rotten” movies really are.

I was too lazy to number them, but the list goes from worst to worster. Yeah, I meant to put that word down, sue me. It appears (according to the “critics”) that Whiteout will be the least painful to watch. There may be some movies missing from this list. I'll have to check over them later, since I actually have a real job that needs my attention. I’m not going to tackle these in any particular order either, because I like not knowing how much pain I’m in for. I’ll leave you all with a movie tease that will entertain everyone. 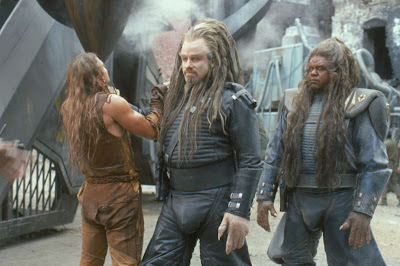 I have to watch this piece of shit movie again? Lovely.