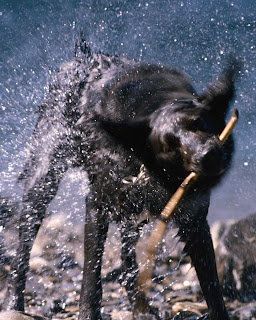 Welcome to the second installment of the Tree Shaker chronicles. Yesterday, we left off at lap one, with promises of more pain and suffering. I guess it’s only right that I start out with lap two (hell, I had to do them in order and so should you.) When the DPC returned, we did the chip swap, and I was ready to go again. He told me that the trail conditions had improved, so I took off with all I had. I was going to make up for lost time. I entered the trail and I was greeted with a nice tacky trail, much to my delight. Now I could ride like the wind.


I pedaled my ass off, taking the corners with an even higher rate of speed than before. My goal was to get us back on track, and also to not disappoint my team. However, the trail had other things in mind. I took one rooty downhill corner a little too fast, and ended up sliding out again. There was no dabbing this time. I landed on my hip and my forearm, and it really hurt. I immediately hopped back on my trusty Goose and went back at it. I tried not to let that little episode deter my speed demon aspirations. I was hurting, but I rode on. I knew I was making good time too. I plowed up the horrible climb that is the Sugar Loop, and I made it this time with no issues. I tamed the rest of the trail like a circus lion, and enjoyed my newfound riding prowess. Little did I know that that the trail had another surprise for me.


I exited the Sugar Loop area, headed for the final section. I jumped off of a little berm and landed on a pile of sharp babyheads. One of them decided that it didn’t want me to have air in my rear tire, so it poked a hole in my tube in two places. Damn, this will slow me down. I pulled over and removed my tire, getting more and more pissed off that a flat had negated my speed. The tube replacement went well, but it seemed like it took forever. I got back on the bike and mashed out the rest of the course. Doug and Craig looked concerned when I arrived. They knew something had to have happened. I explained my misfortune while we exchanged the chip, and Doug was on his way. 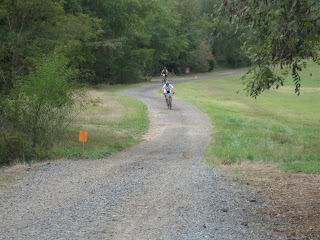 On the final approach to my pit area. 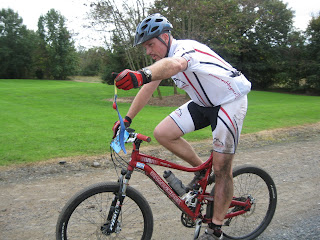 As you can see from my shorts/leg, I had a good crash. I didn’t really feel any affects from it after that, save a little soreness. I would be able to continue. I told Doug that the trail was faster now, so he can go balls out. He took off with a quickness and hoped to avoid any mishaps. That’s racing, I suppose. During my break, I decided that I needed a better carbohydrate replenishment plan, so I busted into the after race beer cooler. I drank one Sweetwater IPA and immediately felt better. I would certainly pass this knowledge onto my teammates. It helped with the pain from my crash too, at least psychologically. Now I was really relaxing between laps. 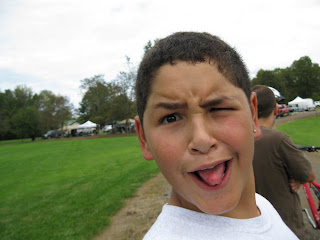 Unfortunately, my photographer (Lunchbox) didn’t take any more good pictures, so I have to rely only on my poor literary skills from now on. Even though the trail was in better condition, our lap times didn’t really improve much. We still hovered around 55 minutes or so. I guess that’s what we expected, but it wasn’t going to get us on the podium. After everyone’s second lap, we were still hanging on to 11th place. Now the goal was to stay out of last place if we could help it.


Doug and Craig both reported minor mishaps on their laps, but no major incidents to speak of. They too had participated in the new carb replenishment program I had stumbled upon earlier. We all completed lap three in stellar fashion (for us), and I was ready to head out for number four (after two beers this time.) The rule for the race was, after 5:30 p.m., lights go on your bike. I readied my lights while the DPC was on lap three, and met him at the transition point.


It was still daylight, but the trail was a little dark. I had a great lap, but I noticed a little cramping in my thighs. I worked it out and kept going, so as not to disappoint my teammates. The shadows were difficult to ride through, and some of the bridges gave me issues. I never went down, but I came close. When I arrived back for chip swapping action, I again relayed the trail status.


Me: “Watch the bridges in the dark. There are a lot of switchbacks that turn directly into bridges. Also, watch the section by the river. It’s really difficult to see the edge.”

DPC: “I’m worried most about the river section.”


Doug headed out in the near dark evening, and never looked back. He had a nice lap, albeit a little slower than usual due to the darkness. He came back to base camp, and the DPC was ready. He headed out like Luke Skywalker attacking the Death Star, and we waited for his return. The last rider had to be out by 8:30 p.m., and the DPC left at around 7:40 p.m. I hoped he would have a good lap so I could head out for one more. My body didn’t want to, but I wanted to put it all out there for the team.


Me: “Hurry up so I can do another lap!”
DPC: Laughs loudly


I changed back into my riding clothes at about 8:20, and waited for our teammate. I kept looking at my watch, with hope that the DPC would return in time. The minutes ticked away, with no sign of the Dirty Party Cycle. I knew there were people still out on the course, so we weren’t really too worried about him. When he arrived a little after 9 p.m., we found out that his light setup was less than ideal. Apparently his lights didn’t do their job properly, so he had to navigate the course a little slower than he intended. He finished his lap however, and our team had completed the 12 Hours of Suffering, er the Tree Shaker. We held onto 11th place, and that was good enough. None of us had ever taken on such a big event like this, and were extremely proud of our efforts. Sure, we won’t have any big-time sponsors knocking down our doors, but we can say we accomplished something significant. Big thanks to Doug and Craig, and also to Lunchbox for assisting with support duties. I am proud to have raced alongside such a great team. We had our celebratory brews when it was over, and toasted the day’s events. Now it’s time to scour the race calendars for the next big adventure. I’m ready, as long as there’s beer.