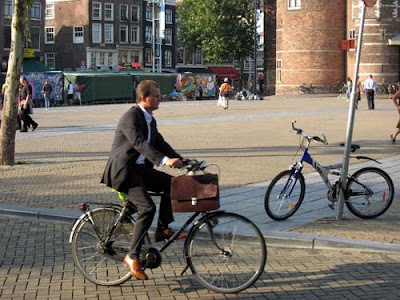 Do I even need to tell the story of last night’s kickoff of the 2010 Charlotte Mountain Bike Summer Series? Of course I do. This is a blog about bicycling you know. What the hell else am I supposed to talk about? Well, it does say nonsensical crap up there in the blog header, but I’ll save that for another day.


When I left work yesterday, I was reminded about how much I hate travelling to each of these races. While I do enjoy being able to ride my bike “competitively” during the week, getting there is actually most of the battle. The after-work traffic around here sucks, and last night it sucked the big one for sure. I arrived at Colonel Francis Beatty Park with only about twenty-five minutes to register, warm up, and get to the start line. Only two of these three tasks would be accomplished.

After I registered Lunchbox and I for our races, we had to change into our riding gear. Once we were finished, I saw that we only had about 10 minutes to get to the start line (about a mile away.) I told Lunchbox that would be our warm-up, so we high-tailed it to the old dam/Gravity Cavity (where we had so much fun on the last Kid’s Ride.) When we arrived at the start, I was amazed at how many race participants we had. In my class alone, there were thirty-six, and Lunchbox had nine in his. I tried to avoid the usual pre-race chit-chat, as I had my electronic music listening device playing “motivational” music to help me along during my laps. I’ve never ridden an event with music before (I forgot to use it at the 6 Hours of Warrior Creek, although I did use it on the last visit there.) I did talk to a few of my fellow racers though, and I gave Lunchbox a little encouragement before his race too. This was gonna be fun, or so I thought.


When it was time for my group to go, I was somewhere in the middle of the pack. Since I didn’t really get in a proper warm-up, I had trouble even fighting for position. I know it’s the first race of the series, but I expected to be a little faster. I way overestimated my ability for sure. Once I got going, I realized that I was still somewhat in the middle of the pack. It wasn’t a fast pace at all though. In fact, I kept running up on the wheels of the guy in front of me, while the guy behind me kept trying to get by. I wasn’t about to let him pass, because I would have just had to run up on him too.


Eventually, we started to spread out. It was at that moment that my lack of a warm-up really got me. I had an almost unbearable pain in my stomach, like someone hat punched me with an iron fist. I found it hard to accelerate at all, but at least The Big O kept up my momentum when I did get going. I hadn’t even made it halfway through the first lap when I started wondering if I could even finish the race. Weird.


Before we even crossed the finish line the first time (my race was supposed to cross it three times), I saw the MadSS down and out on the trail. I asked him if he was okay, and he responded with, “I got a flat.” While I felt bad for him, I figured at least I would stay out of last place now. I hadn’t planned on beating him, so this was a surprise. All I had to do was finish now. I tried to keep the best pace I could, but people started flying by me like I was standing still. That really started to frustrate me, but I hung in there hoping that the pain would go away.


All the way through the first lap, I kept getting passed by people in my class. I had decided that I would just pace myself until the stomach pain went away, and then I would turn it up and hopefully catch up to some of those guys. I’m a lot faster these days (especially on big wheels), but I guess my body wasn’t quite ready for this style of racing.


The music was a big help, by the way. The pain eventually subsided, and I started picking up the pace a bit. I passed the finish line for the second time, and tried to dig in for my last lap. I used the momentum generated by the 29-inch wheels of The Big O to help me along, and made sure I didn’t get passed again. I would go down fighting to stay out of last place if I had to. About two miles into the second lap, yet another rider in my class attempted to get by me. I wasn’t having it this time though. I gave it all I had, and started slowly pulling away from him. He eventually caught up on one of the climbs, but a mistake on the next downhill section would prove to be costly. As we were descending, he tried to overtake me and instead became intimately acquainted with a large tree. The horrific-sounding crash made me look back to see if he was okay, and I was happy to see that he had hopped right up (only to quickly kneel down again.) As I rounded the top of the next climb, I saw him back on the bike and back in the race. I would never see him again though.


I felt better as the second lap went on, probably because I had finally started warming up. I didn’t see anyone else for a while, aside from one unleashed dog that nearly took me out of the race. After a few choice words to the dog’s owner, I sped up again. At this point I heard someone coming up quickly behind me, and I heard him say, “Get some!” “Holy shit,” I said as I looked back. It was the MadSS. I asked, “Did you fix your tire?” He said, “Nope, I just grabbed my spare bike.” And then just like that he blew by me. Oh yeah, I tried to keep up, but it wasn’t happening. That was demoralizing, to say the least. He had a flat tire, was able to go grab his spare bike, get back in the race, and blow by me before the race ended. I gotta ride with that guy a lot more. Shit.


Anywho, I didn’t have much further to go at that point when another guy in my class came up on my rear wheel. I snapped out of my haze, and stepped on it. I had been mostly riding alone (aside from getting blasted by the MadSS), so this was a little unexpected. I didn’t know where I stood in the race, but I knew I wouldn’t finish last if I kept this guy at bay. I gained some good ground on him during a long windy downhill section (thanks to my bigger wheels again), and muscled through the climbs. No more pain at this point, but I still had some hard work ahead. When I hit the very last section of singletrack, I knew I was home free. I gave it my last bit of fight and crossed the finish line, ahead of my unknown challenger. I wound up 32nd out of 36 riders. Shitty, but not last place. Hmmph.


Lunchbox finished ahead of me, and I was very happy about that. I thought for sure I would lap him, since I did two laps and he only had to do one. His race experience was similar to mine, aside from a small mishap where he crashed a little and hurt his ankle. He would recover, thankfully.


No race photos, unfortunately, as my usual photographer Lunchbox was obviously too busy to work the camera. Hopefully my shitty blogging skills have sufficed for today. The first race was definitely a learning experience, and I’m looking forward to the rest of the series (even though it will probably be just as rough.) Maybe I’ll just go back to drinking beer instead. It’s much easier.
Posted by TheMutt at 9:05 AM

'The Big O' is actually a bad-ass anime that is totally cooler than polar bear toes...for realsies.

BTW- to post this, I had to type the verification code 'spled'. Rad.