Six Hours of Wearing Me Out

Wow. My first solo six hour race was an interesting experience. I knew it would be a challenge, but I way overestimated my ability. Yes, I survived, but I paid the price. Even though it was a tough race, I found myself having fun along the way (which was strange for the amount of pain I was in.) But let’s start at the beginning, shall we?


I had a half-day at work on Friday, so I took the opportunity to make sure I had everything ready. If I was gonna fail out there at the 6 Hours of Warrior Creek, it wouldn’t be because of my equipment. I washed my bike and made sure everything was in working order. 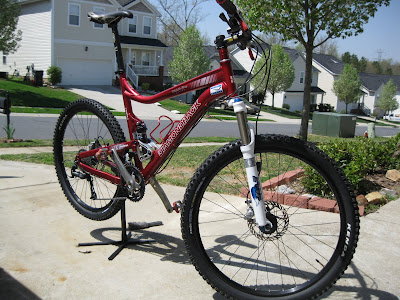 I grabbed one of our coolers, and I packed it full of food. Gel shots, PB&J, tuna, water, and a bunch of other shit I thought I would need. Last would be the water bottles. Since the race was six hours, I packed six bottles (wow, I’m so good at math.) 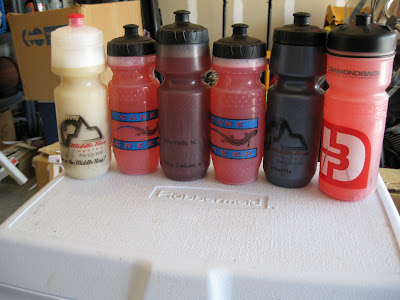 The next morning, Little Miss Sunshine and I loaded up my truck and headed out to Wilkesboro at around 5:30 a.m. When we were about twenty miles from our destination, I sent the MadSS a text message, asking if he was nearby. He replied and told me that he was about 5 miles ahead of me. We were set to arrive at the Warrior Creek campground (close to) on time. Since there were supposed to be over 300 racers, I knew the pit area would be filling up fast. The MadSS and his crew had secured a good spot for us, and we parked and unloaded. We had a slight issue with that part, but I’ll save it for another day this week. Anyway, we got all of our shit set up and waited on the Space Cowboy to arrive. 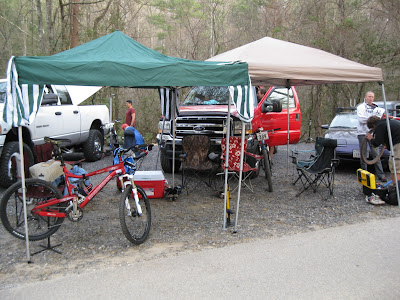 While we were waiting for the race to start, I started milling around to visit some of my cycling friends. I was actually pretty nervous, so it helped to talk to everyone. While I was wandering through the campground/pit area, I spotted a bike that looked very familiar to me, although I hadn’t seen it in person yet. 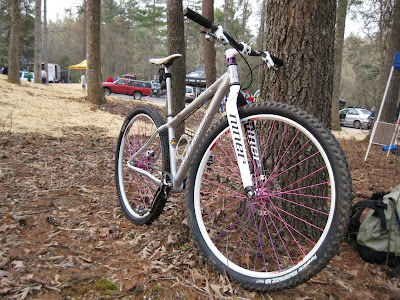 Yes ladies and gentlemen, this is a spy photo of the infamous Meatplow, belonging to our local racing legend, Rich Dillen. I eventually got to talk to him, and thanked him for the, uh acknowledgment a while back. I got some love from the folks at Backcountry Research because of it, so I meant it when I thanked him. We chatted for a bit, and it actually calmed me down, since he’s done more endurance races than anyone I know. I eventually left him alone so I wouldn’t accused of stalking. I forgot to let him autograph my copy of Dirt Rag though. Shit.


The race eventually started, and it was kinda odd. We didn’t head right onto the trail at first. Instead, we did a Tour de France style road ride, which was supposed to thin out the pack. That never really happened though. The road ride was dusty, and honestly it sucked ass. I couldn’t see shit, and I was coughing up dust and dirt for the next two hours. When we finally got into the trail, things didn’t get too much better. I had to last six hours out there, so I didn’t want to put the hammer down to pass anyone at first. I should have though, since every time we approached a climb I ended up losing my momemtum. Eventually, we started spreading out and I got into a rhythm.


The trail was really fast, flowy, and fun. I really had a great time on that first lap, and almost forgot that I was “racing” for six hours. I passed a few people, a few people passed me, and a few people wandered off the trail to do who knows what. You really had to pay attention, but it was well worth it. One interesting feature was the second rock garden (the first one had a go-around.) I pretty much just blasted through it with a loose grip on the bars. This turned out to be the best way, and I actually enjoyed the rocky goodness. I saw one guy try it with the white-knuckle death grip, and he paid dearly with a flat tire and a bruised and bloodied arm. I made my way through the last mile or so and headed over to the pit area. The first lap was over. 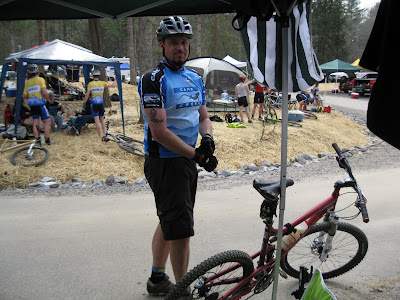 Notice the look of pain. I was actually trying to smile, but that didn’t quite work right. At the time of the photo, I had just wolfed down a bunch of food and I was trying to hurry back out on the course. Little Miss Sunshine thought I was having fun, and she was right. I hopped back on the bike and dug in for another lap, not ready for the pain that would lie ahead.


I’ll be back tomorrow with the rest of the race report, since I probably won’t have shit else to talk about this week.
Posted by TheMutt at 7:06 AM

Laughing out my large intestine.