Just like my tour through the building of DeFeet International’s headquarters, I’ll be working backwards through my adventures from the last few days. On Monday, I had the pleasure of returning to the Kerr Scott Trail System, to take another crack at the trail I rode in the 6 Hours of Warrior Creek “race.” This time though, I had a new weapon: my new 29er, The Big O. Armed with that and my camera, I decided to try to do a little trail review. 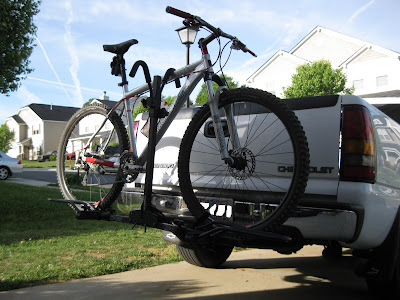 I left the B-43 Worldwide headquarters bright and early, just after Lunchbox headed off to school. This was a solo mission, and a much-needed “alone” ride. I was looking forward to experiencing the trails without the pressures of a “race” and also to see if in fact a 29er would make a difference on those super-fun trails. I arrived on site and got ready to go.


I did a slow warm-up through the parking lot, and hit the trail at full speed. I planned on riding normally, but stopping along the way to photo-document the crazy shit I saw during the race. My first stop came up a little quicker than expected: 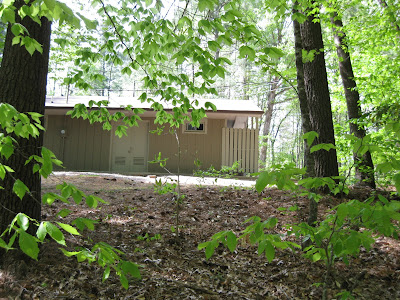 Yup, this is the famous bathroom where I made a pit stop on my third lap. Do you remember that? Well, since it was such a long drive to get there, I decided to stop in again. This time though, the toilet worked fine. That’s good, because I didn’t think to cram a plunger in my Awesome Strap for trailside plumbing.


After my quick pit stop, I continued down the trail. Even though I spent six hours riding it the last time, there were still parts of the trail that seemed unfamiliar. I was familiar enough though, to fly through the trails at crazy speeds. My new big wheels were fast indeed. So fast in fact, that I felt like I was moving a little quicker down the trail than I wanted to. Maybe it was because I wasn’t used to clown wheels, but I grabbed a handful of brake on more than one occasion.


Up ahead, I saw one of the many trailside decorations that puzzled me throughout the 6 Hours of Warrior Creek. This time though, I snapped a photo with ye old camera: 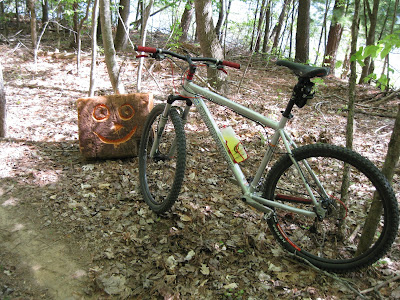 I’m not sure of the signifigance of that particular rock, but it was indeed entertaining. I continued on again, hitting the tight, twisty singletrack at a high rate of speed. After a few quick bermed turns, I saw the bridge that nearly threw me off the trail on my last adventure out there: 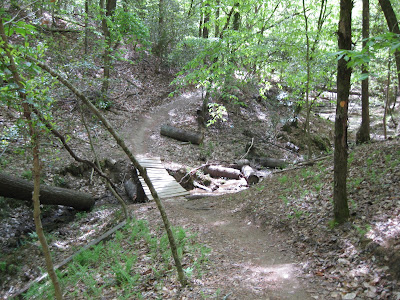 I know, it doesn’t look crazy or anything, but I was making dumb mistakes the first time out, and I had my bike flailing all over the trail like an epileptic chicken. No close calls this time though. After that photo I continued on to the funniest trailside décor, the bar: 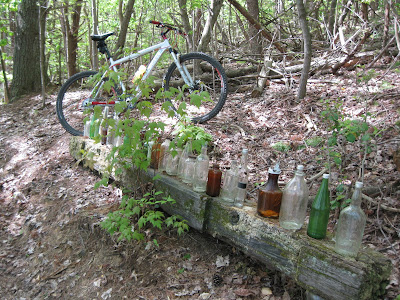 It was at this point that the only other rider I saw that day passed me by. He asked if I was okay, and I simply said, “Yup.” I had no time to explain that I am a nearly world-famous bicycling blogger and I was there for a story of epic proportions. Off I went again.

The next notable part of the trail was when it opened up to a field. After spending a considerable amount of time in the woods, it’s kinda cool to ride a little out in the open. I stopped for another photo op, and to take it all in: 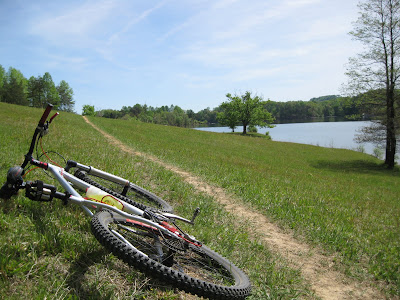 Once again I hopped back on The Big O and continued my fast pace. Soon after, I came across my most favorite thing out there: a tight, twisty, super heavy-duty bermed roller coaster-type section. I had to stop and get a picture of this one: 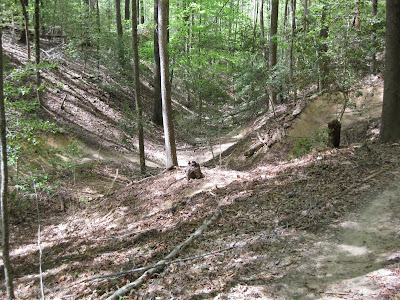 Since it was so fun, I climbed back up and did it several times. Not wanting to keep this fun hidden from the masses, I set up the timer on my camera to catch a few “action shots.” 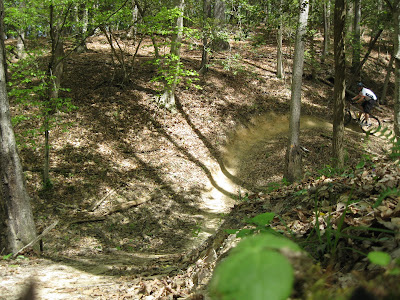 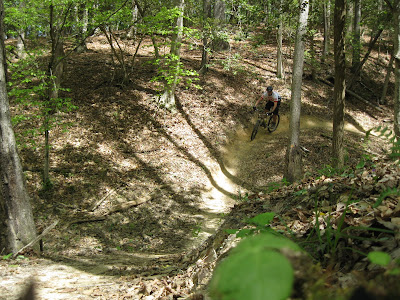 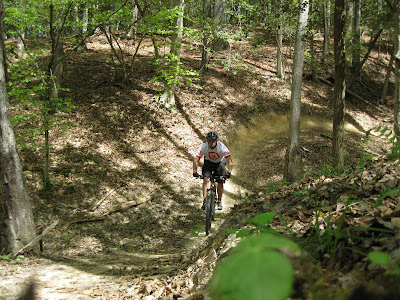 After playing around for a bit, I got going again and discovered a disturbing trailside creature up ahead. This thing kinda spooked me, even though it was probably put in place to ward off evil spirits. 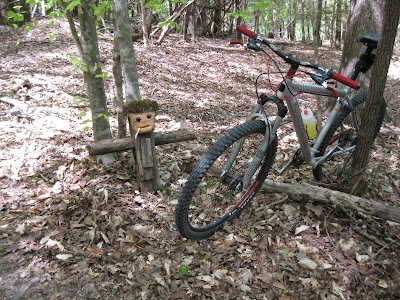 Who knew that voodoo was alive and well in the mountains of North Carolina?

I kept on going, wondering if I had paid the proper amount of respect to the voodoo trail thingy. Would it come back to bite me in the ass? I kept on pedaling through the trail, trying not to stop for fear of some curse catching up to me. Even though I was slightly terrified, I decided to stop at the second (and most challenging) rock garden. I made it through this thing during the race, and I was successful yet again (despite a potential voodoo hex I may have acquired.) I decided to snap a few photos of the Wicked Garden after I cleared it, in hopes that I could properly document its gnarlyitude (yep, made that one up.)

This is looking back towards the direction I came from: 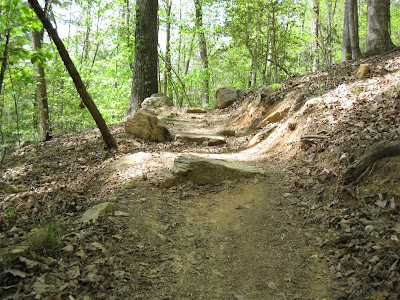 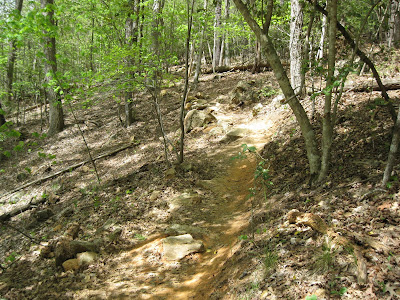 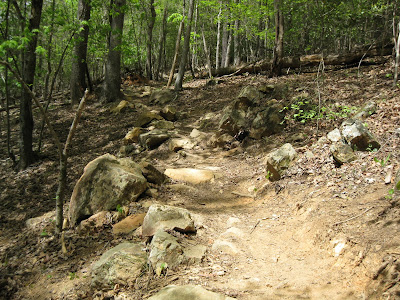 After the rockin’ garden, I made the obligatory pass through the pit area from the race, and headed back into the trail. I made a wrong turn at one point, but I enjoyed the extra mileage. After about fifteen miles, I exited the trail back where I started. I didn’t have all day to be there, so I decided against another lap. I loaded up and headed back to Charlotte. On the way out, I decided to stop and take a photo of something that puzzled me every time I go ride up there: 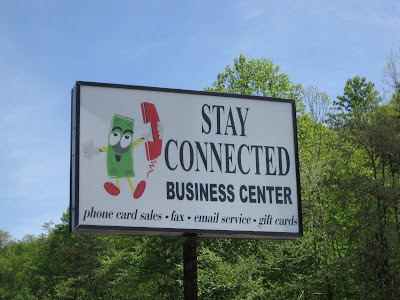 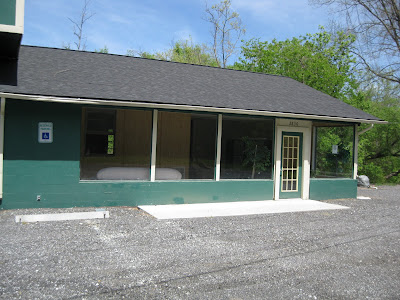 Hmmm, a business center out in the middle of nowhere? Just what I would need if I was a traveling business man/mountain biker in need of connectivity. I guess I could have done this blog post right after I finished riding, but they appeared to be out of “business.” It looks like they are no longer connected to whatever it is that they were supposed to stay connected to.

It was a great day. It was nice to visit the mountain playground of Warrior Creek without the pressures of a “race.” That is one of the most fun trails I have ever ridden. Also, I’m really digging this 29er thing. The Big O was crazy fast…almost too fast. I found myself whizzing around corners at super-high rates of speed, most of the time much faster than I intended. With a little more practice, I should be the master of the 29 inch wheel, and hopefully that will keep me out of last place in any future races I do. Probably not, but it’s fun to dream, right?

By the way, today is Little Miss Sunshine's Birthday. Since she reads the crap and nonsense I put on here each and every day, I thought I should share her birthday will all of you fine readers. So, if you see her out and about today riding her shiny new road bike, make sure you throw a cupcake at her or something. Just kidding, but the best present would be to find a way for her to meet her idol, Lance Armstrong. 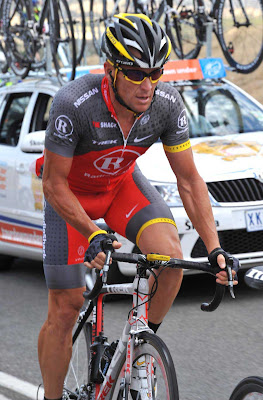 Happy Birthday, Little Miss Sunshine.
Posted by TheMutt at 8:04 AM