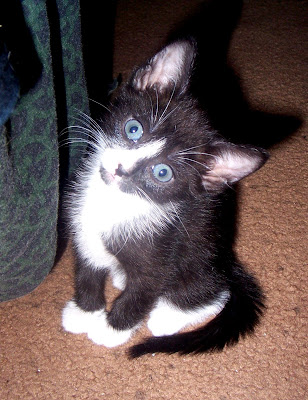 I’m feeling a little under the weather today, so I apologize in advance if this post makes absolutely no sense (most of them don’t anyway.) I mentioned yesterday that I attended some sort of barbecue shindig on Saturday afternoon, but I didn’t really elaborate. While I don’t partake in the eating of swine, we still went to this event to show a little support for our friend and neighbor, The Chili Man. I also went so I could enjoy some beer, but my hopes weren’t real high since I thought the selection would be shitty. 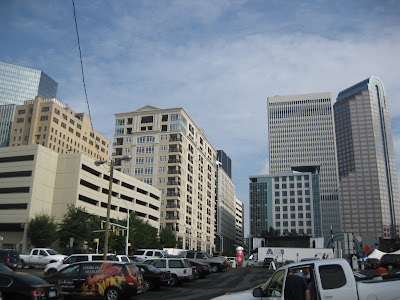 After parking in a lot in Uptown Charlotte, we walked over to the huge row of charred animal flesh vendors and took a gander at the various items for sale. It was your typical food festival, with tons of people wolfing down mass quantities of meats and such. We eventually found our hero, The Chili Man, just as he was about to pack up his wares and head home. 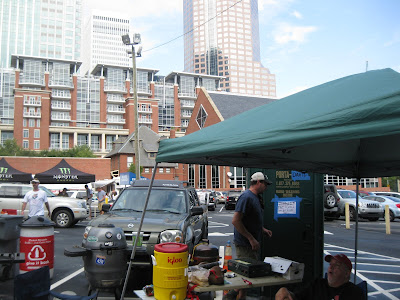 After a chat with Sir Chili, we walked around some more, taking in the sights. Although I didn’t see anything crazy like this, I did see some funny stuff: 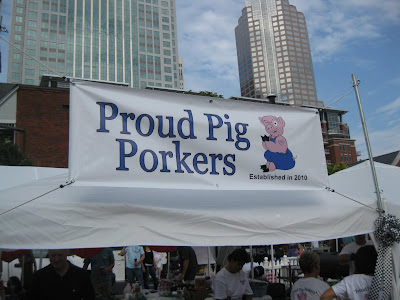 I wouldn’t be so proud of that.

After finding some good beer (a nice pumpkin ale), we decided that we should grab some grub. Since pork products were out of the question, I settled on some alligator goodness made by some unknown folks. Well, it actually wasn’t good at all, since I kind of consider myself a connoisseur of such cuisine. Being a former Florida boy, I’ve had alligator as far back as I can remember, and the stuff I got at the BBQ fest was just plain sucky. From now on I’ll wait until my yearly pilgrimage to Florida to have some.


Anyway, the day wasn’t ruined by my choice of food. We saw some more hilarious/disturbing shit, with this next one being the best/worst. Check out this uh, clown that was entertaining the children: 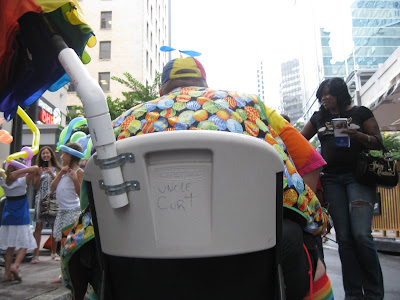 Yes, that chair says, Uncle Curt. He was making balloon animals for kids, and he really creeped us out. Apparently his creepiness had no ill effects on the parents that lined up with their little ones, since he was pretty busy “entertaining.” Even though I was afraid to see what was on the other side, my curiosity got the best of me. I walked around to the front to see what all the fuss was about: 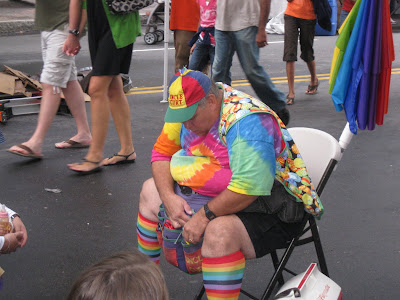 Bless his heart for trying to make a living, but damn. If Lunchbox was still toddler-sized, there’s no way in hell I would line up for a balloon animal. That’s just me, I guess. I’d like to tell you that good ole Uncle Curt was the funniest/saddest thing out there, but I would be lying. We walked up the road a bit and stumbled upon yet another strange sight: 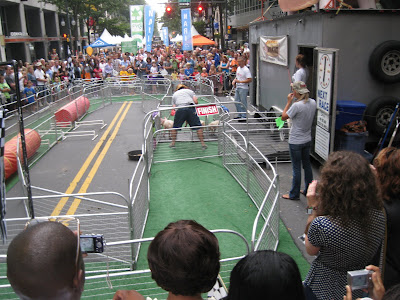 Yup, that’s pig racing right there. I know we’re in NASCAR country and all, but the race of the day here in Charlotte was all about the swine. The announcer did his best to be funny, even naming the little piglet participants. With names like Brad Barbecue Pitt, Kevin Bacon, and the likes, this announcer guy was all about the entertainment. Too bad we weren’t. When the race started, I was already bored. We high-tailed it out of there and went on a quest for more beer to dull the pain. 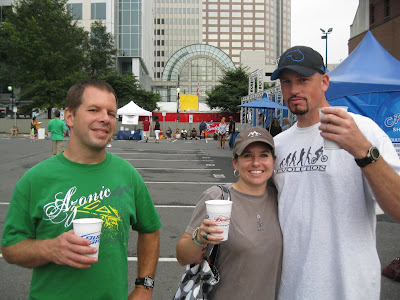 See? All was not lost. This post however, is lost. Maybe I’ll be back with some bicycling stuff tomorrow, because I sure don’t want to talk about pig stuff anymore. This little girl shares my pain from the BBQ fest: 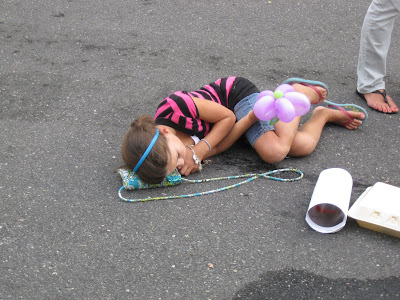