It Wasn’t A Race 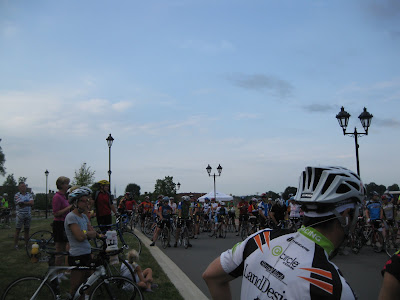 That means I didn’t come in last place, but it doesn’t automatically mean that I would finish it either. Saturday was the Tour De Tots road ride, and I was hoping that my mechanical misfourtunes wouldn’t carry over to my road bike. I’ve mentioned before that I don’t necessarily enjoy riding the road bike, but for events like this it’s kinda cool. So, how did it go?


Well, it started out pretty normal, with the usual cast of characters you’re used to seeing around here. Lunchbox was there with the camera as always, so he managed to capture us at our finest.


Here I am ready for some roadie action: 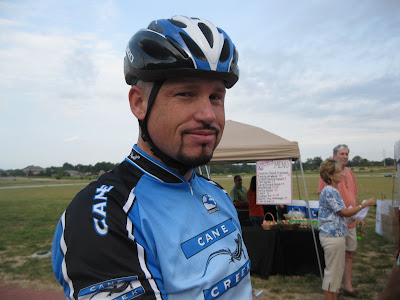 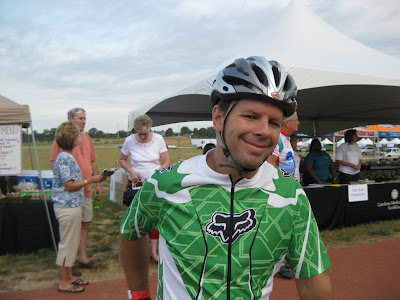 Cycling event promoter extraordinaire Neal Boyd was there putting on another great event: 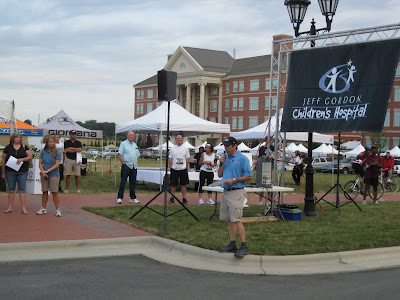 We had a surprise guest as well, Zebra Man: 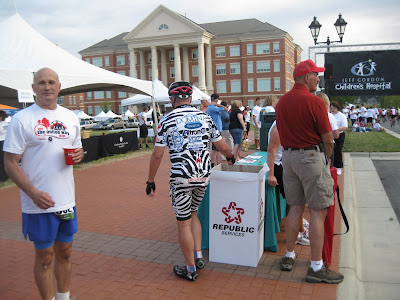 The DPC and I opted for the half metric century distance (31 miles) so we wouldn’t have to work too hard. Also, this would keep us out of the “serious roadie” crowd in which we obviously do not belong. When we lined up at the start/finish line, I noticed that we ended up at the front of the group for some reason: 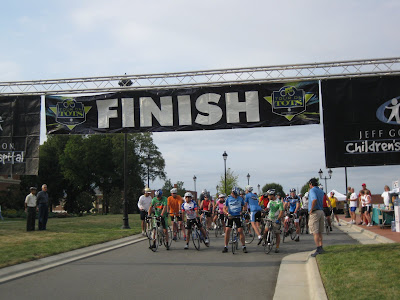 I’m not sure why, but I kind of felt like we would be alright up there in the front. Last year, this very same event was my first-ever group ride on a road bike, and also the longest distance I had ever ridden on a bicycle at once. I’ve put in lots of miles since then, so I must have had some Lance-style aspirations or something. Since it wasn’t a race though, we took off without much fanfare: 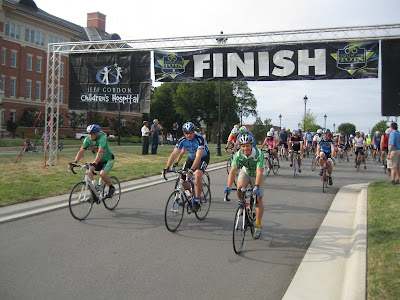 We had a police escort from the starting point, but it was only enough to get us out of town and onto some country roads. The DPC and I were up front behind the police car, but I think he was trying to screw with us. We were mashing the pedals pretty hard to keep up, but the law enforcement cruiser just kept pulling away. The funny thing was, we were leaving the rest of the pack behind. Eventually, the donut containment vehicle pulled aside, and we were left to ride the country roads all by our lonesome.


We decided to slow down a bit, since I wasn’t sure if we could keep up that ridiculous pace for the entire ride. A few moments later the rest of the pack caught up with us. This is where the ride got really fun. I pulled the group a bit, and then I tucked in behind some riders for a little drafty action. After a few minutes of that though, I started to feel like I might be able to break away.


Even though this wasn’t a race, I wanted to see if I could get away. I jumped out from behind the two riders ahead of me, and attacked on a long, steep climb. I looked back over my shoulder, and I saw the pack behind me, appearing smaller and smaller in the distance. I heard one rider shout, “Don’t let him break away!” He was joking around of course, since he is actually one of our local mountain bikers that dabbles in roadie shit from time to time. After leaving the group a good ways behind, I started to think of how the Dirty Party Cycle might not enjoy getting left behind. I slowed way down, and the group caught back up to me. We all had a good laugh about my breakaway and subsequent “capture.” I tucked back in behind the pack and did a little more drafting.


Eventually, the urge to haul ass got to me again. The best thing about riding a road bike is the fact that I can reach speeds of around 40 miles per hour, which is way faster than what I can do on a mountain bike in the woods. I pulled out from the group and attacked again, leaving the peloton in my wake. I was having fun playing roadie, which probably wouldn’t have been the case if we had chosen to do the 62 mile distance.


I settled down the pace after that last breakaway, and decided to let the DPC catch up. The first rest stop was approaching at the 15 mile mark, so I stopped on the side of the road to wait for him. The sag wagon had just passed by me, and Lunchbox leaned out of the window and yelled, “Dang roadie!” He was having fun too (at my expense, of course.)


I figured that Lunchbox would get some good photos while he was riding around the course in the SAG wagon, but this is all he came back with: 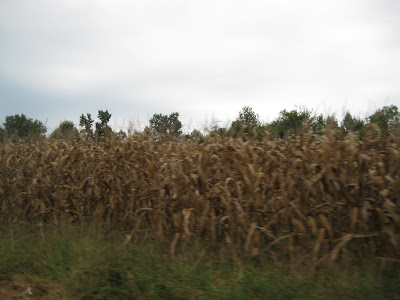 The rest of the ride was pretty uneventful for the most part. The DPC and I settled into a 20 mile per hour pace, and we just shot the shit while we rode our skinny tires out in the country. There was one rather funny mishap though. When I was descending a long hill at a high rate of speed, some kind of bug flew right in my mouth, hitting me in the throat. I coughed a little to get him out, but that didn’t work. I nearly crashed trying to pull over on the side of the road to hack up this little insect, but I eventually got him out. I puked him out on my shoe, which was fun for him I’m sure. Maybe next time he’ll watch where he’s going.


We finished the ride, and it was a good one. I ended up with a little over 35 miles, and my legs felt great. This was a really fun ride, even if it was on the road. We chowed down on some good food after the event while we waited for the rest of the riders to come in. I managed to finish yet another ride without a mechanical failure, so maybe my luck is changing. When we left the Tour De Tots, we headed to the city to harass some barbeque folks, including this big fat pig: 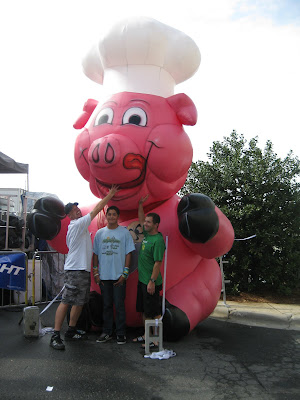 Maybe I’ll talk about that hilarious event tomorrow, since I’ve gone on long enough today.
Posted by TheMutt at 9:03 AM