But you probably already know that. I guess I should start from the beginning though. Even though I worked a shitload of hours last Thursday night/Friday morning, I still ended up working almost a full day on Friday. I was able to get out of work a little early though, and I briefly considered grabbing my bike and heading over to on of our local trails for some mountain biking action. On the way home though, I quickly realized that I didn’t have enough energy to even load my bike on the truck, let alone take it out for a spin. Instead, I decided I would get a good nights sleep and try to get out on the bike in the morning.


A strange thing (for me) happened though. I actually slept in a little bit. Even though my phone went off early, I didn’t roll out of bed until after 9:00 a.m. That’s odd for me, especially since the herd of animals we own usually won’t let you sleep past 7:30 (they have to eat for some reason.) When I finally got up, I check my phone and saw that the MadSS had texted me to see where we were riding. I texted him back and told him that I just got up, but I never heard back. Little Miss Sunshine had already made plans to ride with one of her friends and Lunchbox had some skateboarding plans, so that left me on my own to find some place to ride. I decided on Lake Norman State Park, because I figured that I could manage 18 miles of singletrack goodness without killing myself.


I quickly made a plan. Since I was heading up the road and would be passing the town of Mooresville, I decided that I would make a trip to the Carolina Beer Company to fill up some of my growlers for a little post-ride refreshment action. I loaded up the bike, my growlers, and within about 30 minutes I was pulling into the parking lot of the brewery. 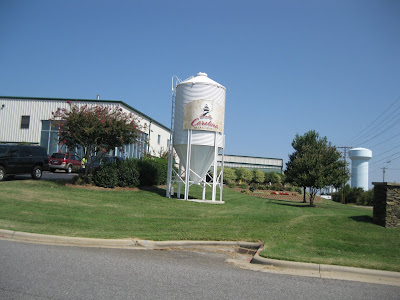 It’s been a little while since I visited this lovely place, so I was pretty excited. Usually though, I get to have a seat and sample their many fine beverages. This time I still had to go ride my bike, so I couldn’t drink anything. I would have to wait until later, which was tough. I am very familiar with most of their beers, so I knew what I was getting. They did have a new brew on tap, a nice little Pumpkin ale that I was told is delicious. I took the brewery worker’s word for it and had them fill up my jugs full o’ beer: 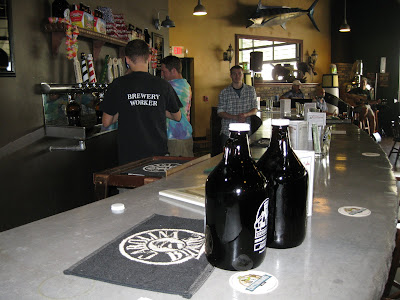 Everyone in that place looked at me like some kind of town drunk when I walked in carrying four empty growlers to be filled. That changed on the way out though, when I heard several people say, “That’s a good idea. Beer to go.” It was a good idea indeed, since it only cost me $22 for almost 2 gallons of beer. What a deal. Check it: 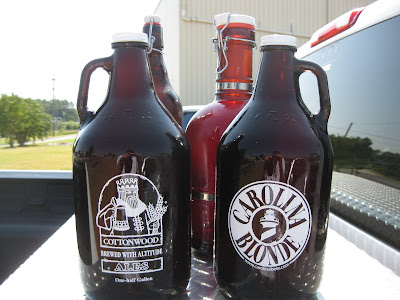 Since I do in fact love beer, I’ll skip the riding part of my day (until tomorrow no doubt) and tell you all about it. I filled up one of the bottles with Strawberry Blonde for Little Miss Sunshine, which is one of her favorites. For a fruit beer, it’s actually pretty good. I have one from time to time, but I’m not really into the sweet stuff when it comes to beer.


The next beer on the menu was the Cottonwood Endo India Pale Ale. If you’ve been around here for a little while, then you know how much I love IPAs. The Cottonwood Endo is a good one, and I’m happy to be able to drive a few miles up the road to get some fresh off the tap. I actually filled two of my growlers with that stuff, so I would have plenty. One can never have too much IPA goodness.


The last container was filled with the new pumpkin beer I saw. Even though I didn’t sample any of it, I took a chance of the Cottonwood Pumpkin Spiced Ale. I enjoy pretty much everything that comes from the Carolina Beer Company , so I figured that this would be a good beer as well. I could have sampled some, but I probably wouldn’t have ended up riding my bike that day. Since Autumn is right around the corner, it’s only fitting that I drink a few “seasonal” beers. I couldn’t drink pumpkin beer all the time, but I do enjoy have some this time of year while it lasts. I’m glad I waited to sample it though, because it was so good. The Cottonwood Pumpkin Ale had a nice pumpkin flavor (duh), and it had just the right amount of spices with a nice little clove aftertaste. In fact, Little Miss Sunshine and I polished off the giant jog o’ beer that night. I guess she liked it too.


What about the riding? Well yeah, I did get out and ride the bike over the weekend, but I’ll save that for tomorrow. Apparently, nothing is more important than beer right now. Or else I just feel like dragging stuff out just for the sake of dragging it out. That’s what I usually like to do, so why should I change that? Come back tomorrow and find out if it’s worth the wait.
Posted by TheMutt at 9:45 AM