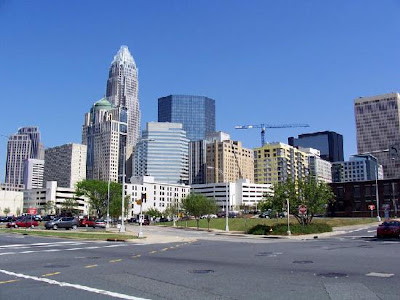 Yep, I’m finally back here in Charlotte. After fighting my way through tons of traffic (due to several accidents), I’ve arrived safe and sound back home. It was nice visiting the area where my family comes from, but I worked my ass off while I was up there. Sorry about not posting anything yesterday, but it was a travel day and I didn’t feel like coming up with anything to put on here before I hit the road.


Did I do anything other than work and visit my family? Well yeah, of course I did. I managed to find a little free time to sneak over to Washington, D.C. to take in the sights. My first stop, The White House. 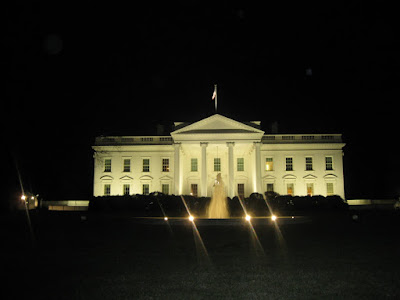 I don’t care what your political affiliation is, but this is one of the prettiest places to see in our country. The history in that house alone is enough to make you stare at it in awe. Plus, it looks pretty cool at night. After getting back to my hotel room later that night though, I learned via the local news channel that I just barely missed being in the middle of one of those Egyptian protests. That’s a good thing, since I could have ended up like Anderson Cooper or something.


I chatted with the uniformed Secret Service agents in front of the White House while I took some photos, and they never mentioned it. They weren’t exactly the most talkative people anyway, mind you. I struck up a conversation with them mainly because I didn’t want them to think I was up to no good out in front of the President’s house, and that I was just there to see the sights. Since it was so cold, I had a hooded sweatshirt on to block the wind. Couple that with the fact that I was there at like 9:30 at night, I probably did look pretty suspicious. They were highly against me taking their photograph, but I did manage to get a photo of their “secret” vehicle: 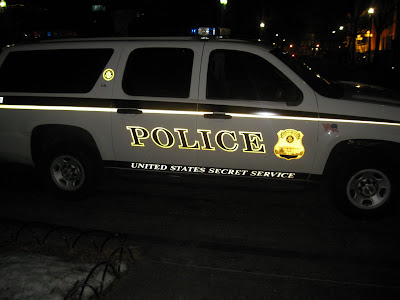 I decided to keep wandering around the city, and take in all the sights I could on that cold evening. On my way to the back of the White House, I stopped for a photo of the Treasury Building. 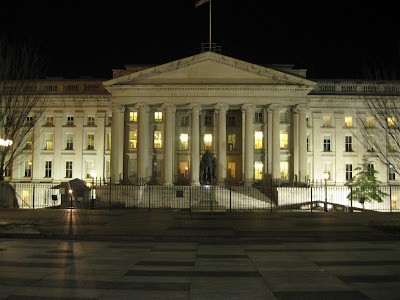 Don’t you come here to read about bicycles? Well, don’t worry, because they were on my mind. Here’s a photo of the really cool bike lanes in the downtown area. 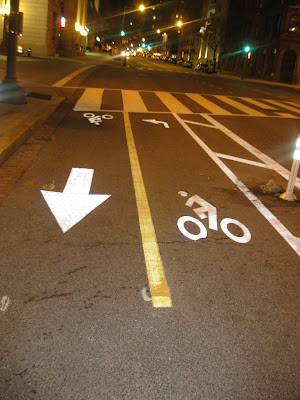 Speaking of bicycles, I saw more Secret Service agents handling an apparent “situation.” Some of them were on bikes, so I figured that it was worth a photo. 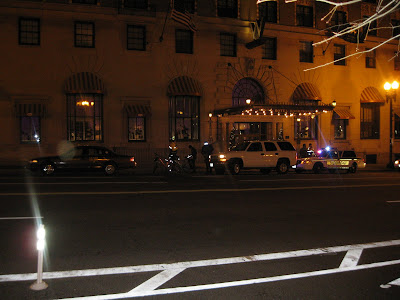 I thought that they might try to take my camera away or something, so I hurried along and got the hell out of the (without running, because that would get their attention for sure.) Here is a shot of the Capital Building, but it’s pretty far away so you’ll have to find it. 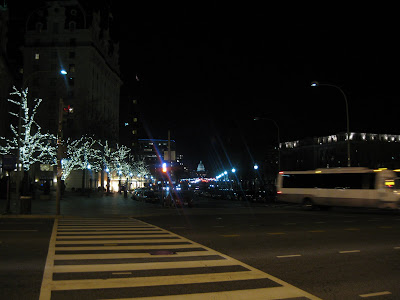 Still on my way to the back of the White House, I saw the Washington Monument. I was too lazy to walk all the way over there, so I zoomed in and took a shitty photo. 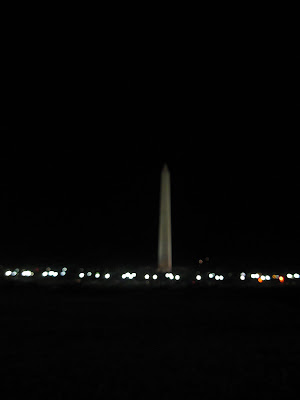 When I finally made it to the back of the White House, I was greeted by even more agents. It seemed like they were watching my every move (and I’m sure they were.) After a brief conversation about where I could stand and take photos, I finally got one of the south lawn. 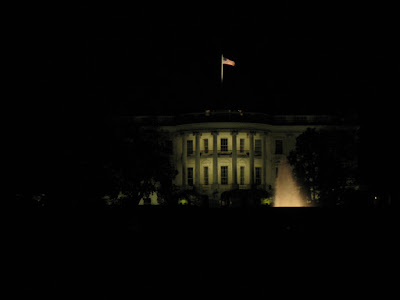 And right next door is the Old Executive Office Building. 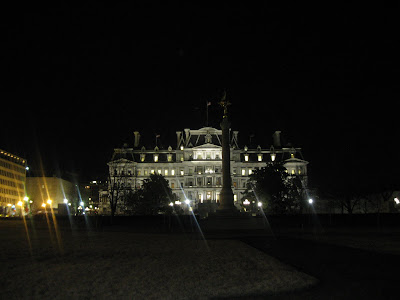 Right behind the EOB, I saw this really cool thing: 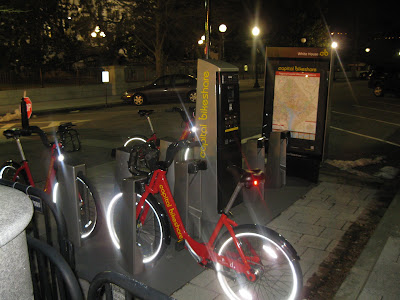 These bikes are part of the Capital Bikeshare program, which lets you basically rent bikes all over the Metro DC area. It was pretty nest to see. Just then, I turned around and saw something pretty funny. There was this guy on a road bike, all bundled up and getting his ride on. Behind the White House are checkpoints with little security booths and barricades, complete with you guessed it, Secret Service agents. This poor roadie suffered a flat tire, and nearly crashed into the booth (causing a threat to National Security no doubt.) I didn’t get a photo of the accident, but I did manage to capture him carrying his bike away. 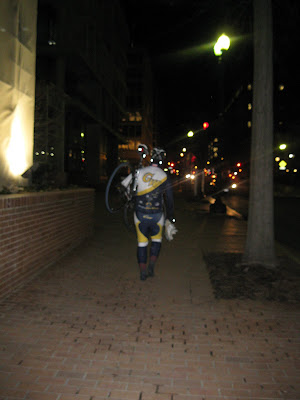 I didn’t have much more time there, so I hopped in my truck for a quick tour of the rest of D.C. Here is shot of Chinatown: 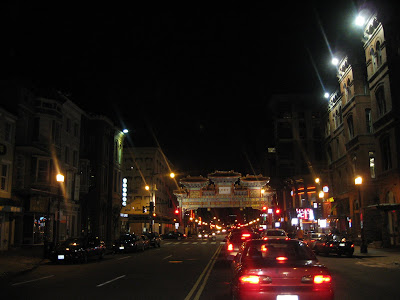 And the Capital Building, complete with more of those barricades: 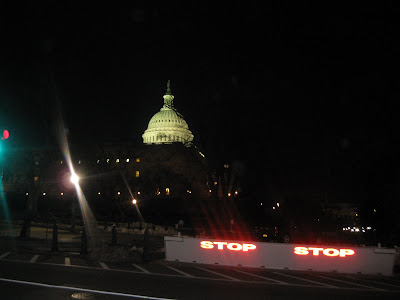 And more bike lanes, but these are right in the middle of the road on Pennsylvania Avenue. You may have heard about it, but here’s a photo anyway: 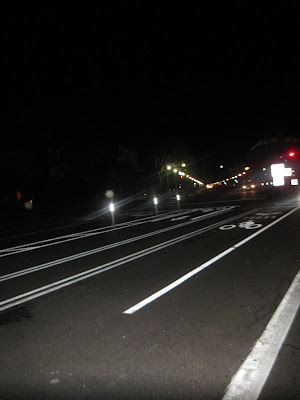 That was pretty much it for my D.C. trip. It’s always nice to visit there, and I enjoy every second I spend there (even if it’s only a quick visit.) I am a history buff, and places like that are my favorites. The bicycle stuff didn’t end there though, because I saw this in my family’s home town of Manassas, VA: 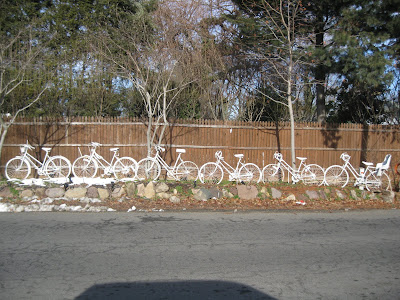 How’s that for yard art?

I’ll be back on Monday with a sloppy and wet race report (most likely), so I’ll see y’all then. Well, that is if I feel like getting sloppy and wet.
Posted by TheMutt at 8:47 AM