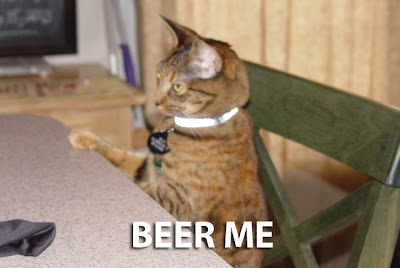 Since I was back out traveling yesterday for my real job, I was happy to get back home and have some beer. While I was away last week on my uh, business trip, I bought a new beer that I had never tried before. It’s time to share that beer with you folks. 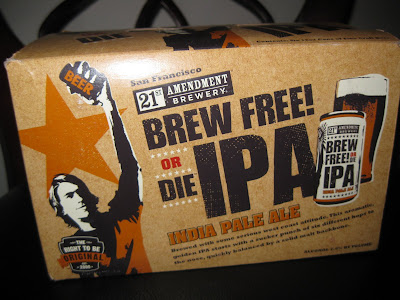 This is the Brew Free or Die IPA, from 21st Amendment Brewery, somewhere out there in California. Before you get all uppity, I’ll put it out there. Yes, this beer is in a can, and no, I’m not crazy. Back when I tried some shitty beer, I pretty much confirmed what most of the people who know me were already well aware of: I’m somewhat of a beer snob. So, to drink beer from a can might seem a little funny, but trust me it’s well worth it. It’s an IPA after all (and my favorite kind of beer in case you don’t pay attention), so that gives it a head start over any other kind of beer that may find itself packaged in a can. Now, let’s get on with the tasting. 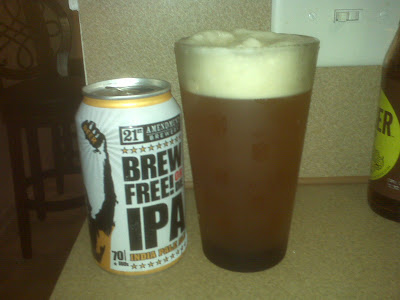 It might be hard to tell from the glass I poured it in, but it’s a light-colored beer (golden in fact), with a pretty decent head on it (it didn’t last long.) It didn’t seem to be overly carbonated, but it was just enough. One sniff of this canned beer and you could smell a nice citrus aroma, but not too much of anything else. It was actually pleasant, and I couldn’t really tell (from the smell anyway) that I had just poured it from a can.


It’s a tad bit sweet, but it is definitely an IPA. The citrus taste wasn’t as much as I expected, even though that was mostly what I smelled when I poured it. It is a little dry, and has a slightly bitter aftertaste. My only problem with the taste was the fact that you could actually tell that it came from a can, but it wasn’t too strong. Maybe I was looking for that “can taste”, so it’s a little hard to tell how much it really affected the beer.


Okay, maybe I have one more problem with the taste. It wasn’t really that hoppy for an IPA. Since I usually drink stuff like Dogfish Head 60 Minute IPA (and the 90 minute) and Ranger from New Belgium I may have had my hopes a little too high. Nevertheless, this is a pretty decent IPA, and it wasn’t very expensive.


My recommendation (as if it matters)? Go out and try it. You will be pleasantly surprised, and you might even enjoy drinking a decent beer in a can. I know some of you drink shit beer in a can, so step up a bit and give this one a sip or two. I would never declare myself a beer expert or anything, but I do enjoy a good one. In fact, I think I’ll have another when I get home tonight.


I’ll be back tomorrow with some actual bike stuff I guess, but I still have yet another beer to try out. See ya.
Posted by TheMutt at 8:22 AM

When you said some of you drink shit beer in a can, were you referring to me and my choice yesterday?
wv:hapecte

Of course I am. One day I'll bring you back from the dark side.