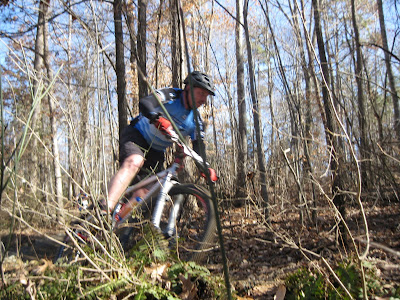 This photo pretty much sums up my race series so far. While the blurry picture may suggest that I’m hauling ass through the woods each week, I am in fact getting slower out there. My fitness seems to be improving each week, but so is everyone else’s. I’m lucky enough to keep my ass outta last place in each race, but it seems like just barely. The funny thing is (going into yesterday’s race) I am sitting in 6th place overall. Since the prizes for the series go five deep, I’m actually pretty surprised.


Since I was out of town all week, I got zero riding in. Also, it rained a lot in the days leading up to the race, so I figured that the trails would be another muddy mess. That wasn’t the case. As the morning races went on, I noticed that the bikes out there had very little mud on them, and the riders had even less. In fact, the trail seemed a lot faster than in the last few races. It was pretty warm out too, so I didn’t have to bundle up in fifty layers of riding gear to keep from freezing to death. When it was time to start my race, the only cold weather stuff I had to use was a short sleeve base layer and some arm warmers. I would find later on that I was a tad bit overdressed.


When the race started, I tried my best to stay with the pack. I’m usually the guy that sits right in the middle of the group anyway, behind the really fast guys and ever so slightly in front of the slower guys. I had a pretty decent warm up before my race, so I was able to ride full speed on the first lap. During the first lap (while I was still in the middle of the group), a guy two spots in front of me crashed. I was able to get around him pretty quickly, but not after asking if he was okay. We continued our blistering pace until the fire road climb just after the rock garden. It was at that point that I starting feeling really warm.


I pushed my way up the fire road, trying to gain a little speed and momentum along the way. I knew that after I reached the top, it was downhill for a while and I could use that to recover. That pretty much became the plan for each lap. It hurt like hell, but it did allow me to go faster. That’s what I saw the really fast guys do anyway, so I hoped that it would work for me. As I passed the start/finish line, I was in 6th place, and not too far from the group ahead of me. I took off through the singletrack as fast as I could, hoping that I could catch up to anyone ahead of me. 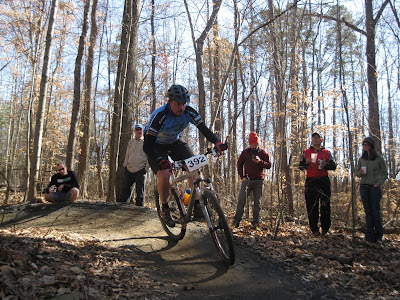 I was breathing heavy, and my body was way too warm. I was afraid to try to remove my arm warmers, because I knew that any mishap could result in disaster for me on the course. I toughed it out, knowing that my core temperature was getting too high. I know, it probably sounds weird that I was getting too hot during a winter series race, but the unseasonably warm temperatures outside made for an interesting day. I did my best to keep the remaining guys in my class behind me, and it was not easy considering that they were gaining on me each lap.


The race from that point on was pretty much a blur. I went around and around on the short track, and did my best to not screw up. I would never catch the professional guys in the top spots, but there was no way in hell that I would end up DFL. Even though it was a sufferfest out there for me, I still managed to have a little fun. 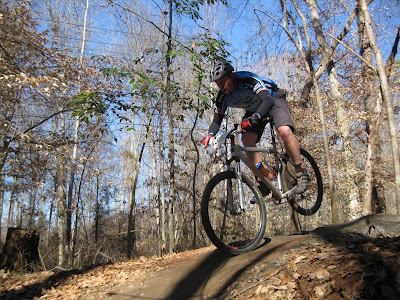 When I heard, “Two laps to go”, I saw a guy in my class come up behind me on the fire road climb. It was the guy that crashed earlier in the race, and he had fought his way back into the fray. As we rode through the downhill section into the parking lot and passed the start/finish line, I decided that I would make this guy earn his spot in the race. I stood up and mashed as hard as I could, and passed that guy again, leaving him way behind. I knew I was faster in the woods, so I didn’t want to be stuck behind him riding his wheel. I pedaled the whole way through the trail, hoping that I had put a good cushion between us. It worked, at first.


When I came out on the fire road climb, I was exhausted. I was burning up, and way out of breath. That guy had caught back up to me, passed me again, and this time I had nothing left in me to catch him. The only good thing about that poor decision was that it left the other guys behind me even further back. As long as I could keep a decent pace on the last lap, I would be okay.


The last lap was a little slower, but I didn’t see anyone else from may class in a position to catch me. I tried to recover a bit, just in case I had to pedal my ass off on the climb out to fight those guys off. I didn’t need to, and I sailed across the finish line in 7th place. Not good, but not too shitty I guess.


I think I may have learned something here. Next time I’ll suffer a little being cold at the start of the race, because I sure as shit won’t need those extra layers of crap when I get warmed up. It probably wouldn’t have made a difference either way, but maybe I wouldn’t have felt so shitty out there if I wasn’t so damn warm. There is one more race to go in this series, so maybe I can do a little bit better, and hopefully get a little faster. It’s hard to believe that I could get slower, but you never know.
Posted by TheMutt at 10:04 AM

Dude!
I've got to get Cane Creek to let me design a new kit for you to ride in!!!
That old logo's gotta go! :)

Overreacting to some chilly weather, like a true Floridian.