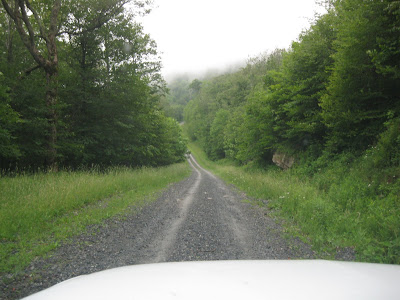 From getting there, to the conditions on the mountain, and the actual riding of the trails, I had to earn every bit of reward I could possibly get at the 8th race in theSouthern Classic Series, the Magic Cycles American Mountain Bike Challenge Weekend.


After a nearly three hour drive to get to Beech Mountain (including a stop to pick up the Dirty Party Cycle), I turned onto a road that looked sorta odd (the photo above.) I thought I had made a wrong turn, until someone came barreling in the other direction with bike racks on their vehicle. We were really close, but damn it was a rough journey. The weather even looked shitty on the way up, but it sort of cleared when we got to the top of the mountain.


Parking was tight, but the views were great: 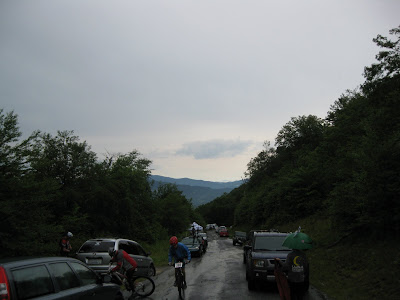 There were a lot of people ready to race, but the weather had other plans. The sky opened up with buckets of rain, and the temperature dropped…a lot. I was freezing my nips off out there, and I came unprepared for a cold spell. I mean damn, it is the middle of June after all. I figured it wouldn’t be so bad when I started racing, since I would warm up. There was lightning in the sky above though, which made the race status uncertain.


We would end up waiting around for a bit to see if we would even race. A few people decided to bail, but I wouldn’t be one of them. I would race as long as there was a race to race, but I had no control over that. Eventually it stopped raining, and the race was back on. I knew the trail conditions wouldn’t be so great, but damn it I was getting out there. I didn’t drive all the way from Charlotte for nothing, but I was still contemplating my decision. 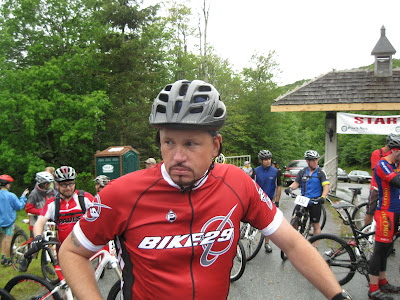 I didn’t want to get my Bike29 team kit dirty.


A few of the other categories went out, and it was finally our turn. What happened, you ask? You came here today for a race report? Oh, sorry. That will be tomorrow. I have to take a little time and dissect what happened out there. It was a mess, that’s for sure.
Posted by TheMutt at 6:58 AM

congrats on a well earned win dude, that wasn't an easy win even with only 3 people in your class considering treacherous trail conditions, you mayhave to ban yourself now for disrespectin bee-atch mountain