What Was I Doing? 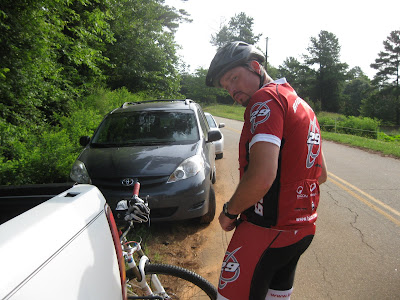 I have no idea…in that photo or at the race yesterday. I know that I was down in Clemson, Sc for the Tiger Rag, but the details are kinda fuzzy. The whole day just felt weird, and it probably started when I got out of bed.


Five oh damn clock. Way too damn early. Since my race time was 9:30 a.m., I had to use my math skills and figure out how much time I would need. I calculated that it would take exactly three and a half hours to do the following: drag my ass outta bed, get ready, eat a giant bowl of oatmeal, load up the bike, drive to Kings Mountain to pick up the Dirty Party Cycle, drive to some trailhead in Clemson, pickup my race goodies, and warm up. I didn’t account for a small pukey session at the top of the DPC’s neighborhood from drinking an expired generic sports drink. I made up for that by driving eighty-eight miles per hour the whole way.


We got there after a couple of wrong turns, and I got ready. I felt like shit, probably from my upset stomach and lack o’ sleep. Nevertheless, I was there to collect points for the overall series, and had no idea what I was about to ride. We started shortly after 9:30, and I played it cool. I ignored my nerves and sour tummy, and hung out with the pack of riders in my class. Without knowing the course at all, I hung with the leaders…for a while. 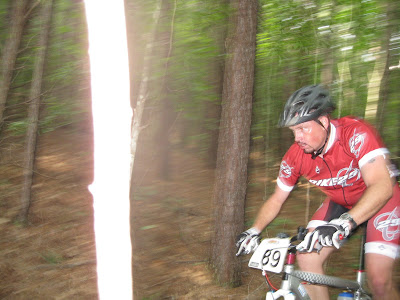 What an odd photo. Oh yeah, my photographer is on vacation. Thanks DPC…for realz.


After seeing my temporary photographer, I forgot that I was racing, and decided to morph into Bigfoot. It was way more fun anyway. 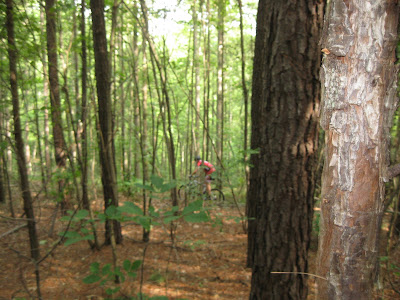 I pushed, but fell back from the lead group about halfway through lap one. I guessed that I was in the middle of the pack somewhere, but I was taking my time and “feeling” out the trail. At one point I passed a guy in my class with a flat tire, but he got back by me eventually. I didn’t let anyone else get by me, but I was wearing down…and fast. There was a really long, downhill fireroad section that I got to haul ass on (getting up to around 30 m.p.h.), and I thought that I could use that to put a gap on the guys behind me. Towards the end though, there was around a mile long climb out, and I was suffering in the humid conditions. All I could think of at that point was that I have to do that one more time on lap two.


I was defeated, and only halfway through. As I rounded the corner to go out for lap two, I heard a bystander say, “They’re not far ahead. You can still catch them and make the podium.”


I knew what I was up against on lap two, and it worried me. My body was not cooperating after only nine and a half miles, but there was no way in hell I was going to quit. I could handle it, but could I keep from dropping back to DFL? I was a little motivated by those random comments from that kind stranger, but I wondered if I had it in me to catch them. All I wanted to do was sit down and take a break for a spell, and resume the race when I felt up to it. I couldn’t do that of course, but I can sure as shit do that here.


I”ll be back tomorrow with the conclusion, ‘cause I like making y’all suffer too.
Posted by TheMutt at 7:12 AM