Where Was I Now?

There were some tough climbs, some fast, twisty downhills, and even a little water here and there. 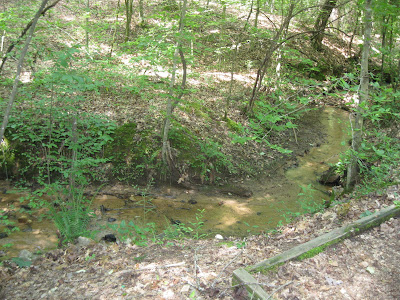 There was shit out there on the trail that I didn’t even notice. 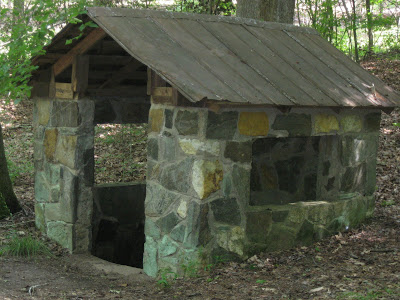 I was on lap two out there, and I don’t really remember any of the scenery. It’s a good thing the Dirty Party Cycle was out there taking photos. I didn’t see him on my second lap, but that doesn’t mean he wasn’t there. Hell, Bigfoot could have been out there and I wouldn’t have noticed him unless he ran out in front of me. I was hot, tired, and worst of all: I was cramping.


Yeah, my legs were feeling like shit. That could have been from the fact that I released some of my breakfast earlier that morning, but it could have also been from the hellacious climbs I had to suffer through. Honestly, I don’t remember much from the second lap, except that there were guys in my class behind me, and I spent a lot of time looking over my shoulder. That probably slowed me down, but I tried to make up for it by hauling ass on the downhill sections. My plan worked, I guess.


On the last climb out, I was hurting. It was all I could do to get up the hill, and onto the last bit of singletrack. When I did, I didn’t see anyone else behind me. I gave what little I had left, and crossed the finish line. When the results came out, I ended up in 7th place. Not great, but at least I was in the top ten. The good news about it is that I got some points for the overall standings, and there was only one other guy out there that’s in contention. At least for now it looks like I’m in 2nd overall, well within my goal of a top ten finish when it’s all over.


We didn’t stick around long, because I had to get some food (and beer of course.) We found a familiar sight nearby called The Mellow Mushroom, and the DPC and I found a seat and got ready for some good beer. When he asked where the beer menu was, the server informed us that we are in the Bible Belt and that they don’t serve alcohol on Sunday. Beer fail. We asked if this is true in all of South Carolina and she said no, and that we could head over to Greenville where they are a little more open-minded. We got the hell out of there and hit the road again, hoping for success this time. 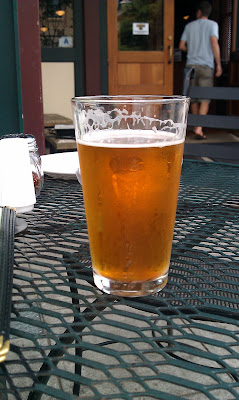 Yes! I got a Stone Ruination IPA, and I was happy. We also got to chow down on some grub, and it was so good that the DPC didn’t know where to start. 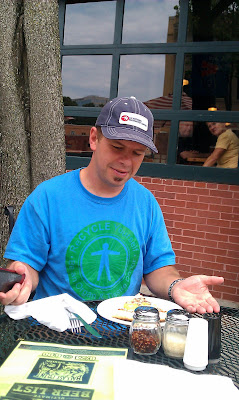 See those people looking at him in the background? What the hell were they doing?


Anyway, it turned out to be a good day. An early start, a long drive to some fun yet tough trails, and after a little difficulty: beer. Any day that involves riding bikes and drinking beer is a good one, that’s for sure.


I’ll be back tomorrow with some more race analysis, but it won’t be what you think. I broke a cardinal rule and put on a new part without testing it, but that probably didn’t have shit to do with my piss poor performance.
Posted by TheMutt at 8:29 AM