It Was a Good One

Saturday was one of those rides that make you smile. In fact, it was the most fun I’ve had on a bike in quite some time. I always have fun riding in the woods, but things were way better this time. Maybe it was because of the fact that we went on a road trip. I do like getting away from time to time.

We had us a big ol’ convoy heading down to Augusta, GA. 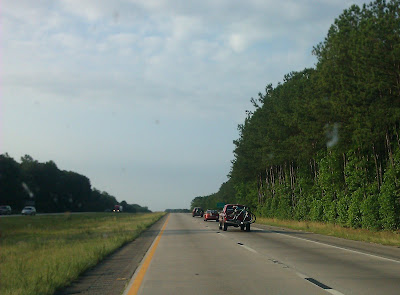 And an even bigger group meeting us there: 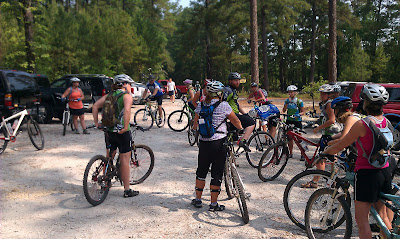 And of course the group shot: 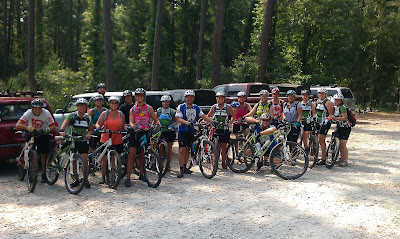 The Forks Area Trail System did not disappoint. We started out on a trail called Great Wall, which is about seven and a half miles. After a short fire road-type intro, the trail turned into fast, super-smooth, whoop-de-doos. I couldn’t believe how fun it was. Lunchbox and stayed far enough back from the main group so we could pretty much go as fast as we wanted, and damn did we go fast. Way faster than we probably should have. I was sliding out a little bit on the turns, but a quick stop on the side of the trail to put a little air in my rear tire took care of that issue.


After rockin’ the Great Wall, we ended up back where we started. That was a good thing, since it was also the start of our next loop, Skinny. This one was six miles, and more of the same fast swoopy goodness. Shit, we hardly had to pedal. There were a few climbs here and there, but I have to say that this place was more like a big ass pump track. The little jumps were so quick that they would throw you up in the air real quick if you weren’t careful. I almost regretted not bringing my singlespeed. I was definitely glad I had a 29er though. I know Lunchbox was too: 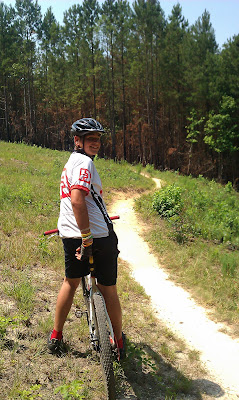 About two thirds of the way into the second loop (Skinny), I noticed that we were pretty close to the Savannah River. Since I know that Alligators can be found there, I asked Lunchbox if he wanted to go look for some. Of course he agreed, and we hopped off our bikes and headed down to the water. 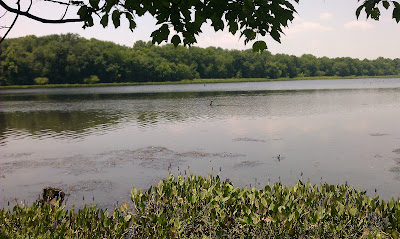 I saw a few when we drove across the Savannah River on our way to the trailhead, but I didn’t see shit when we got down by the water. I figured that they stayed away from that part of the water because of the noise and what-not. Just then, I noticed some bubbles coming up in the water, and I knew that was one of our reptilian friends. We were happy enough to find one, and decided to continue our ride and catch up to the group.


We met up with the rest of the folks out there at the entrance of a loop called Brown Wave, which is actually off of the Skinny loop. We heard that this one was one of the best loops out here, so we got ready for some fun. We let the group get way up ahead again, and eventually Lunchbox and I got busy riding. We took off fast, and enjoyed pretty much the same kind of trail we had seen earlier. It was plenty fun.


With about two and a half miles to go, we started thinking about the end of our day. We were just cruising along trying to finish our ride, and we saw Little Miss Sunshine sitting on the side of the trail. She was hurt from a small spill, but at least she was laughing about it. 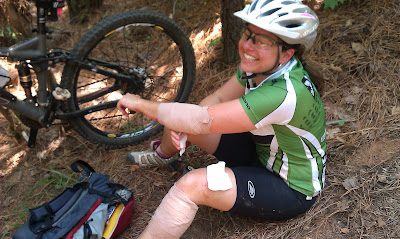 After making sure she way okay, we kept on going. She made it out okay, so we didn’t have to go back in to retrieve her. 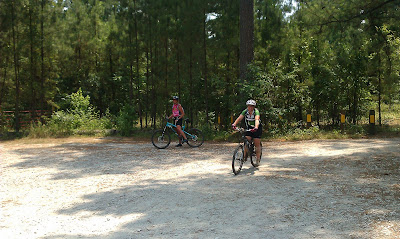 Since she didn’t have a full first aid kit, I cleaned up her injury when we got back to the truck. It was not pretty. 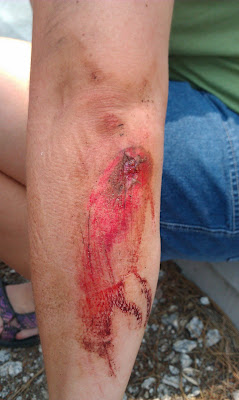 And that was after I cleaned it off.


Other than that small mishap, it was an awesome day. Over twenty miles of singletrack goodness with family and friends is what I needed. Big thanks to the Dirt Divas for organizing the trip and getting me out of the state to ride. I am heading back there as soon as I can. If you want to plan a trip, let me know. I have to get back there pronto. Oh yeah, I have a shitload of video footage from our ride too. I used a different camera perspective on some of it, and it looks awesome. I’ll get that up here as soon as I can get a chance to edit it all.
Posted by TheMutt at 8:19 AM

agave nectar could cure that.