You may have noticed that I didn’t say anything yesterday about the Tarheel Trailblazers that was scheduled for Sunday. Well, that’s because it didn’t happen. The trail at Sherman Branch was closed, so we had to cancel the ride. The only place open locally was the U.S. National Whitewater Center, but I didn’t really feel like going there. Truth is, I wanted an easy ride, which the Kids Ride would have been.


After driving back and forth to Augusta on Saturday, I really didn’t feel like getting in my truck to go anywhere. I resisted the urge to hang around the house and do nothing, although it was difficult. I briefly considered taking one of my mountain bikes out for some urban assault action, but I wasn’t feeling that either. For some reason, the road bike was calling my name.


There it sat, in the garage, getting no love from anyone. I pulled it down and pumped up the tires, and everything was good to go. After planning out a ~30 mile route using Google maps, I changed into some roadie attire and got ready to go. By the time I got everything done, it was 2:00 p.m. and hot as shit outside. I could only carry two water bottles, so I planned on a stop at a store along the way. If I planned it right, there was a store about fifteen miles into the ride. If I didn’t, I would be dead on the side of the road, with buzzards picking at my skull. Either way sounded good.


I took off, and headed north towards Huntersville. Most of the ride would be on back roads, which meant that people would be hauling ass in their cars. That’s one reason why I hate riding on the road. Most people in cars are assholes when they see someone on a bike, and I don’t want to end up dead…or worse. Not only did I have to worry about the heat, I had to think about cars trying to take me out.


I made it to my first stop in about an hour, which was about what I had planned. I wasn’t pushing real hard, but I did keep a good pace. I had just finished off my last bottle, so I stopped in the store to by some Gatorade. I refilled my bottles, and drank the rest before I headed back on the road again. As soon as I got back on the road, I was stuck in traffic near North Mecklenburg Park. The cars were moving along about 5-10 miles per hour, and some stupid bimbo behind me kept trying to go around. When we stopped, I told her to back off. She did, surprisingly. I left that busy stretch of road in Huntersville, and headed back out into the country. 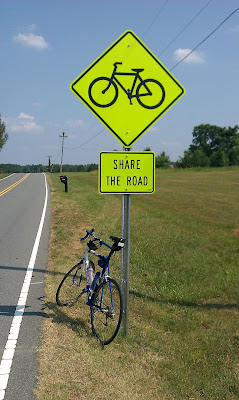 Ironically, after I passed that sign the drivers started being a little more courteous. I felt like I was out in the middle of nowhere, and that made this leg of the trip that much more enjoyable. I was headed to Concord, in a roundabout sort of way. I got a couple of fast, curvy, downhill sections out there, and it was fun. Yeah, I had fun on my road bike. Don’t tell anyone. With about ten miles to go though, I started getting bored. I’ve probably said it here before, but twenty miles on a road bike is about all I can stand. That, coupled with the fact that the sun was bearing down on me with full force, I started wishing that the ride was over. I had quite a ways to go.


Eventually I got back to my neighborhood. I passed by two malls, two mountain bike trails, and countless other establishments that looked way more fun that what I was out there doing. I don’t regret it though, because at least I got off my ass and did something. Hell, you can even call it “training” if you want. I ran some fancy GPS app on my phone the whole time, and I liked what I saw.


(I’m using the free version, so I can’t link it directly to here.)


Wow. 2191 calories. I had no idea that I would burn that many calories, but I guess us “heavier” folks have to work a little harder. I was starving to death though, and thirsty for beer. I only drank Gatorade and water, and ate nothing during the ride (and only had a light breakfast.) I’m surprised I made it through the ride at all. I wouldn’t call my ride fun, but it was an adventure. That’s good enough for me. Now I’ll probably put the roadie away for a while so it can resume it’s dust collecting.

By the way, I won't be here tomorrow. I have to take a short out of town trip for work. See y'all Thursday.
Posted by TheMutt at 8:27 AM