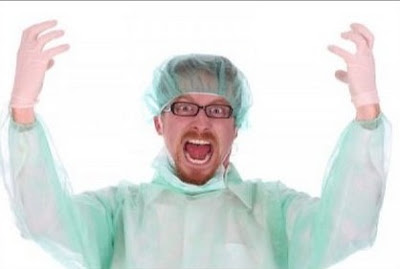 Yep, I gots it. I’ve been looking into a fork upgrade for The Big O for a while now, and I thought I had pretty much decided on something. Well, that is until I saw something here for sale locally. I was pretty much set on a new Rockshox Reba, but a guy around here had a sorta kinda like new Fox RLC for a sweet price. I snatched it up on Friday. 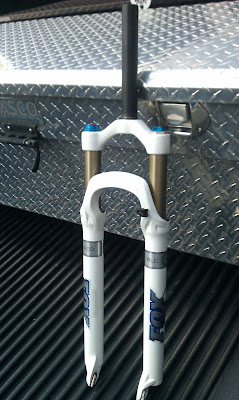 This is a major upgrade (compared to my RockShox Tora), but I’m not a stranger to Fox forks. I have pretty much the same thing on my squishy bike, although it’s the 26 inch version. The Big O deserved some Foxitude too, and a little change is good sometimes. The biggest change is that my Tora has only 80mm of travel. 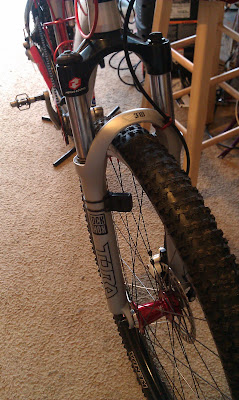 The Fox goodness is 100mm of plush travel, and I knew it would affect the handling of my bike a little bit. I wanted to wait until after I raced to put it on, but I kept staring at it in the garage and couldn’t help it. 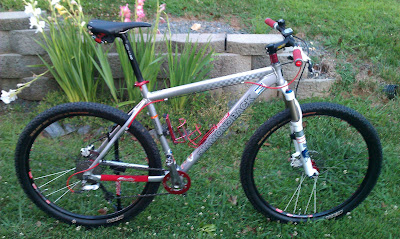 It looked good, and after the standard down the street test ride I was happy with its performance. There would be no time to test it on a trail before I raced last Sunday, so I would have to find out how different it was in “race” conditions. Not a great idea, but I was willing to take a chance.


While my legs and lungs didn’t cooperate too well in the race, I added a new issue to the mix. The handling on my bike was so different that I was having trouble on the downhills. It felt all wonky in the turns, but the cushy new fork was pretty comfortable at least. About halfway through the second nine mile lap, I started getting used to the extra 20mm of travel and subsequent handling difference. By then it was too late. My race had been affected by my lack of handling, but I doubt that I would have fared much better with the old fork still on there.


Did I learn anything from this? Probably not. I know it’s not a great idea to mess with a bike the day before a race, but I just couldn’t help it. Bike parts don’t do any good just hanging around unused, you know. I am pretty impatient when it comes to bike stuff, and I probably should have waited to put on my new fork. What fun would it be around here if everything went smooth anyway? It wouldn’t.
Posted by TheMutt at 8:33 AM

I made a similar move from a Tora 29er (G2 offset, 80mm travel) on my Fisher to a Reba (standard offset, 100mm travel). Had some pretty squirrelly handling at first, but after I tweaked the fork and tire pressure it felt great. Play with the setup and see if it makes a difference.