There is yet another new bike here at the B-43 Worldwide Headquarters, but this time it’s not mine. With two thirds of my household riding 29ers (not including the pets that don’t ride bikes), it was only a matter of time before Little Miss Sunshine became “big-wheel curious.” We always thought that she would be too short to ride such a large-wheeled bicycle, but lots of little people ride them. The little lady figured, “Why not?”


After a couple of rides on a demo bike provided by our local shop, The Cycle Path, Little Miss Sunshine started seriously thinking about switching over to a 29er full time. And why not? Niner Bikes was having a sale on some frames, so it seemed like a good time for her to jump on it. The Cycle Path does a lot for our local scene, from support of the Tarheel Trailblazers to trailbuilding, so it seemed like a no-brainer to let him order one for her. While we were at it, we ordered some wheels too. It didn’t take long for the frame to come in. 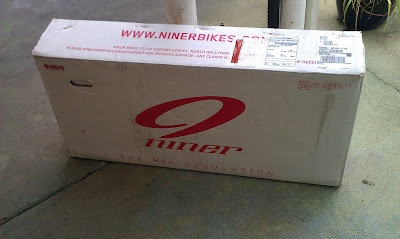 Let’s have a peek inside: 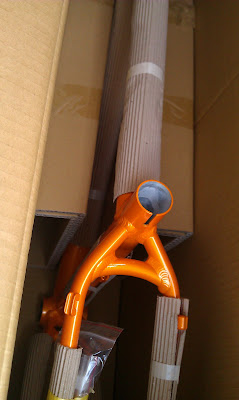 Yep, it’s a tang Niner Air9, in a very small size. It’s the same frame she rode on the demo bike, but in a bright orange. I had a few things in the shop to use for her new build, but she would have to collect a whole mess of parts to have a complete bike. I had a slightly used RockShox Tora fork, some Easton bars and a stem, and that was it for my contribution. She started gathering up some stuff after the frame was ordered, but it wasn’t quite enough to build a bike…yet. 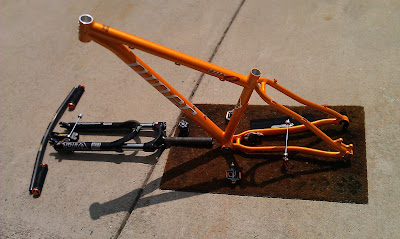 That thing is gonna be hard to ride like that.


Eventually, parts started trickling in so I could get my build on. I love building bikes, so seeing a pile of new parts made me happy. 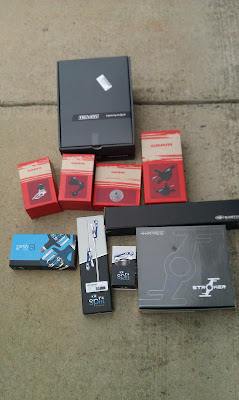 I couldn’t wait. I had already pressed in the new Cane Creek headset and installed the fork, stem, and handlebars. The wheels finally showed up (handbuilt stock wheels from Stan’s), so the only thing I was missing for the build was a set of tires. Luckily, I had a set of Kenda Slant Six tires shipped from Bike29, and they arrived lickety-split. George always takes care of me, and as always I am impressed with his customer service skills. And I’m not just saying that because I ride for him, either.


I set the wheels up tubeless, which was much easier this time now that I’ve had some practice. They were pretty cool too, especially for “stock” ones. They sealed up pretty quickly, and I was happy. It was time to get to work and finish the build. Little Miss Sunshine couldn’t wait to ride it, but she had no choice. I wanted to take my time and do it right. I always say that there are two ways to do things: right, and right now. Right now would result in a shitty bike that would fall apart. I know she wouldn’t want that.


What about the finished product? Did I finish it? Why, yes I did. However, since things are a little slow around here this week I’ll come back tomorrow for the conclusion of the “Little” Big Orange Bike Build. I know you’ll be back. What the hell else do you have to do?
Posted by TheMutt at 7:03 AM

When I saw that Niner box in my Dashboard I thought "DAMN that was fast." Figured you had already gone out and bought a Niner after the demo.

Something I was slow to catch on to when shooting pictures at vintage bike shows was to take one shot of the show placard with the bike so that I could know for sure later what make, model, year, and maybe who the owner is. Wheels For Sale