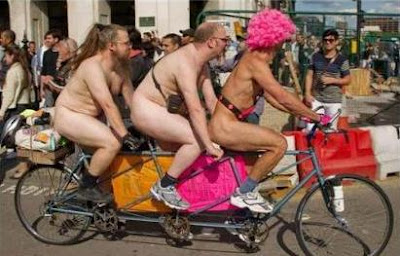 Sometimes I decide that I want to be a serious cyclist, and that means I should actually do some real “training.” I ride as much as I can, but I normally do it without any sort of plan. That’s fine with me for the most part, since I’m into this shit mostly for fun (and the added benefit of being able to drink as much beer as I want.) Anyway, a few years ago I bought a road bike to help with my mountain biking, since I thought that’s what all the cool guys do.


At first, I rode quite a bit. It was fun, and most importantly, different. After a few close calls on the road by cars though, I started rethinking the whole “roadie thing.” I decided that I would rather take my chances with trees on the trail instead of stupid ass drivers on the road trying to kill me. Also, I started to get pretty bored riding alone on the road. I’ve done a few rides that were pretty cool though, including charity group rides and pedaling along the Blue Ridge Parkway. That wasn’t enough to help my mountain biking though, since I did those things so infrequently. My road bike spends more time hanging in the garage than it does on the pavement. I was fine with that, since I am a mountain biker first anyway.


A few weeks ago though, Little Miss Sunshine piqued my interest with a group ride she joined. It was a ride with the folks from one of our local shops, Bike Line, which is really close to our house. It was a twenty one mile “no drop” ride, which was meant for cyclists of all abilities. I’ve been looking for a group ride that was easy to make it to, since some of the others were kind of a long drive (or ride if I chose to.) I could ride to this one if I wanted, so I made plans to attend. I finally found some time this past Sunday to go, so I got my shit together. I planned on getting up extra early to ride from my house to make it to the 8:00 a.m. start time.


Plans change, and my plans were no exception. I was on call for work, and I had to take care of something before I headed out the door. By the time I was finished, it was too late to ride to the shop. I gathered up my stuff and drove over there, and I was just in time. Everyone was getting ready to go. 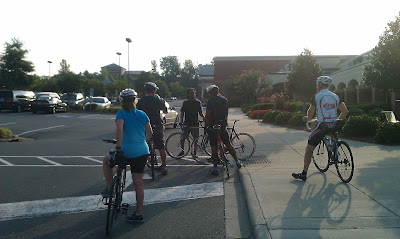 They asked if anyone was new to the ride, and I raised my hand. Then they asked what kind of pace I keep, and I had no idea what to say. “I’m not a roadie, I’m a mountain biker”, I said, much to the dismay of the roadies in attendance. I guess they thought I would be a slowpoke, so I ended up at the back of the pack. Fine by me…at first.


When we took off, I could already tell I was going too slowly. I carefully and politely made my way through the group, and ended up with the guys up front, better known as the “A” group. What the hell was I thinking? I can ride fast and power up climbs, but I wasn’t sure if I could hold that kind of pace for the whole ride. The plan was to ride about eight miles and regroup, and then we could split off again. My plan was to survive until we regrouped, and fall back with the slower folks.


I eventually got into a rhythm, and found myself in the top three. It wasn’t race, but these guys were keeping a fast pace (especially on the climbs.) I liked it though, and I wasn’t even getting tired. When we got to the rendezvous point, I knew I could hang with the big boys. I’m no roadie for sure, but I was riding well enough. When we took off again, the lead guys invited me along. This time though, I got in the lead for a while. We took turns up front like roadies do, and I only dropped back to let the guys that knew the route lead us through the countryside. It was a nice, hilly, scenic ride, and I had a blast. When we were less than a mile away though, I heard a sound I had not heard since…


Shit. I broke a spoke (again.) It’s been a while, and I had all but forgotten that I had done this a few times before. I stopped for a minute to hide the broken spoke with its not broken friends, and finished the ride. I left my bike at the shop to have the wheel repaired, and got to talking with the owner.


He pretty much said that those wheels aren’t strong enough for me and my Clydesdaleness, and that I should look at getting another set. I have a hard time justifying the expenditure of money on road stuff, but I did see a few things I liked that wouldn’t break the bank. I guess I’ll be getting a new wheelset soon, reluctantly. I like getting new bike parts, but road stuff just doesn’t excite me.


Where are the rest of the pictures from the ride, you ask? Well, since I was so busy trying to pretend I was in Le Tour de France (without punching spectators like a little sissy), I didn’t break out the camera at all. Hell, I didn’t even get a picture of my broken spoke. I suck. I did run the GPS app on my phone though, and liked what I saw. 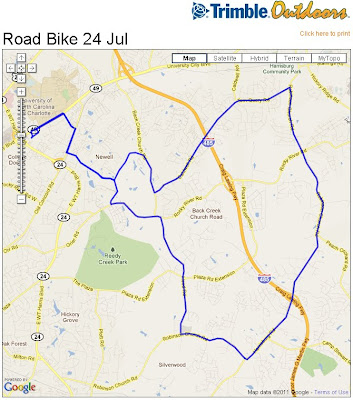 Click here to see the map so you can zoom in and junk.


I’m still no roadie, but at least I had fun. Oh yeah, I guess that counts as “training” too. See y’all tomorrow.
Posted by TheMutt at 8:27 AM

Looks aren't the only thing this cruiser has though. It wouldn't be a sixthreezero without the
smooth cruise configuration, so you know it will not only look great, but it'll give yopu the
smoothest and easiest ride possible California Bikes.
cruiser bike