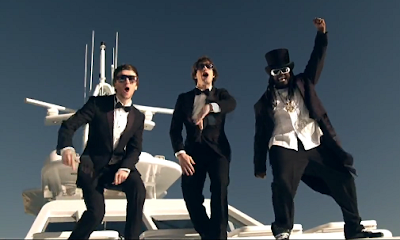 I was on a boat. And yes, I’ll bore you to death with more of vacation photos too. After driving a little bit, Little Miss Sunshine and I ended up on Harker’s Island, the gateway to Cape Lookout. We had to take a little boat ride to get there (it is a lonely island), but it was worth it. First though, I had something to take care of. 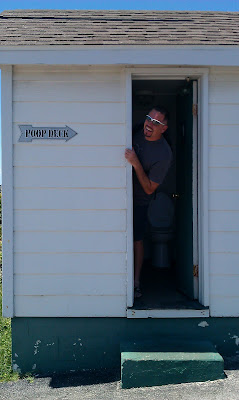 After a short ride across the water, we saw yet another lighthouse. Since this is one of the little lady’s favorite things to do, she was happy that we made it. 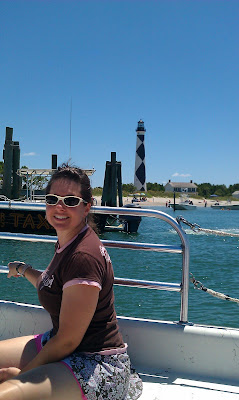 We got off the boat (and yes I thought of that song a lot), and walked over to the lighthouse. It is one of the most unique designs, and I thought it was pretty cool. 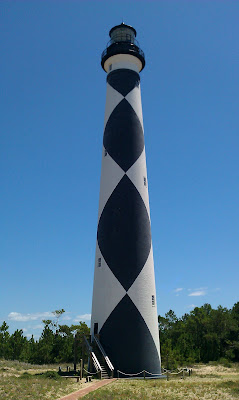 There were quite a few people hanging out there, so we decided to take a walk along the beach to get away from them. After a few minutes, we were all alone. The lighthouse was still watching us though. 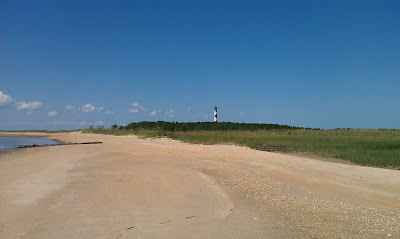 There we signs of life out there though, but we didn’t see much of it. I found these bird tracks in the sand: 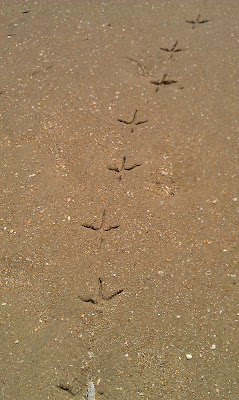 They travel single file to hide their numbers.

After a couple of hours of solitude, we caught another boat back to the mainland. This time though, the captain stopped alongside a nearby island so we could see some wild horses, which are said to be descendants of Spanish Mustangs that survived a shipwreck. 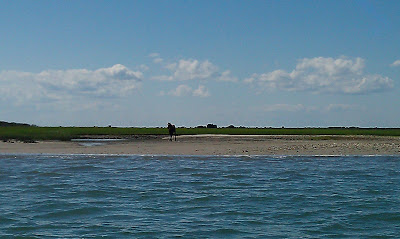 After getting back to land, we hopped in my truck to drive for a bit (to catch another boat.) This time we were headed to Ocracoke Island, to see if we could find Blackbeard’s treasure. Little Miss Sunshine was hanging off the front of the boat like she was on the Titanic, so I had to take a photo of myself. 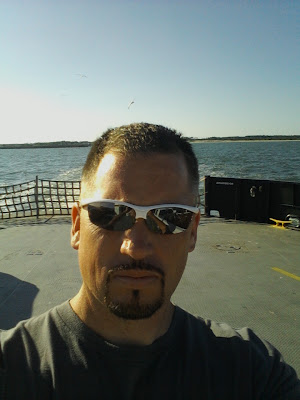 It was a two and a half hour ride, ad we saw nothing but water for a long time. 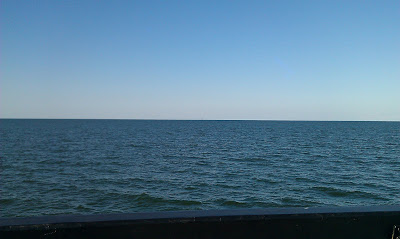 All I could think about was the boat sinking with us (and my truck) on it. The sun was starting to go down, so that distracted me a bit. 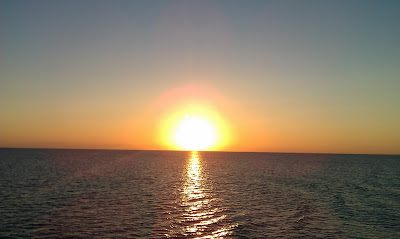 Before we knew it, we saw the island. I was relieved. 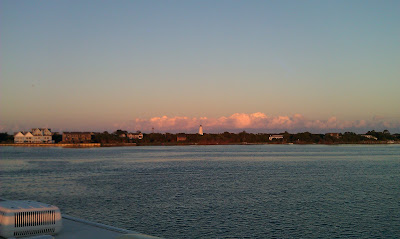 After knocking on the door at one of the island’s many inns, we found a place to stay for the night. We unloaded our crap and hopped on our bikes to see the lighthouse (of course.) 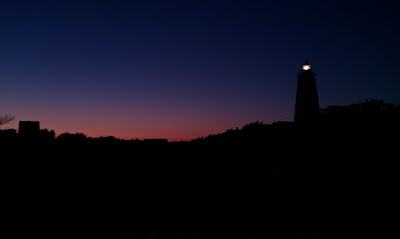 We had some dinner, and headed over to the store for provisions for the night. The little island store carried New Belgium’s Ranger, so I was in heaven. I installed a rack on Little Miss Sunshine’s commuter bike just for this occasion. 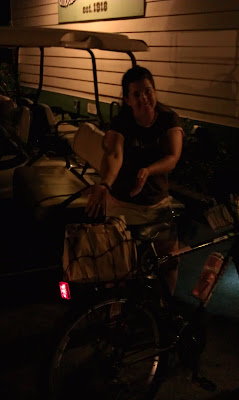 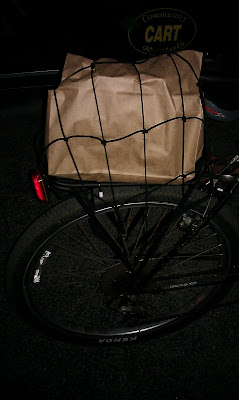 We picked up some drinking water too, but the safety of the beer was more important. I decided that I would carry the water the best way I could. 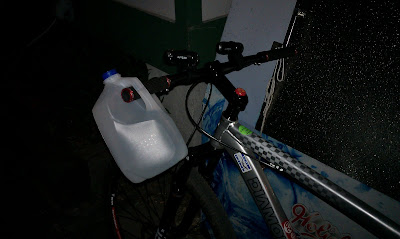 The next day we took yet another boat, this time for a much shorter journey to Hatteras Island. We stopped for lunch at some grease pit, and found some good food. They had random stickers all over the seats. 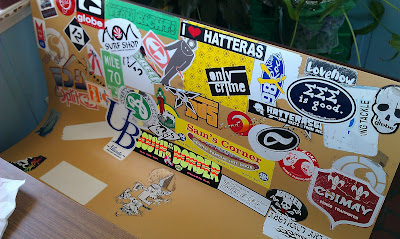 Have a closer look: 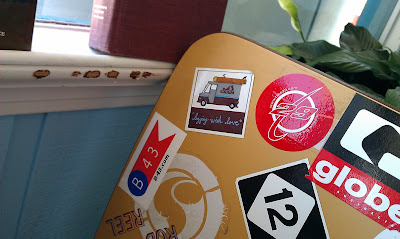 Yup, there is a B-43 sticker, and one of those fancy new Bike29 stickers. Even the islands are showing George some love.

Our next stop was (surprise) another lighthouse. This time it’s the famous Cape Hatteras light. It’s the little lady’s favorite, so we had to check it out again. 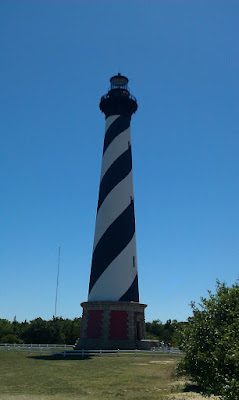 Back in 1999, they had to move it closer inland. Not a small task, and in this next photo you can see how far it had to go. I was standing on the spot where it used to be. 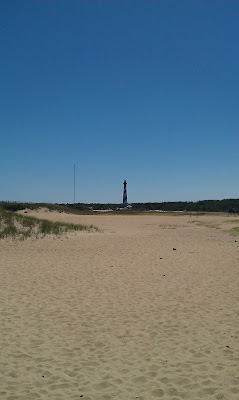 After that fun filled adventure, we headed back to Ocracoke Island. Again, we got on a boat. There is no other way to get there unless you have an airplane or you can swim really far. I was digging this boating stuff. 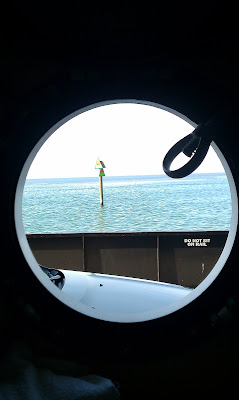 We got a chance to see the Ocracoke Lighthouse in the daytime, and it is a wee little thing. 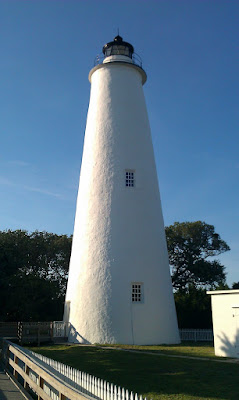 We even took a peek inside: 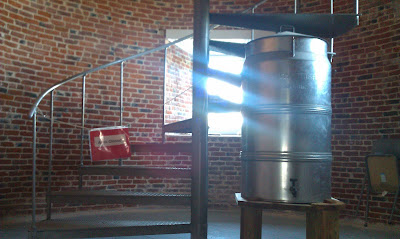 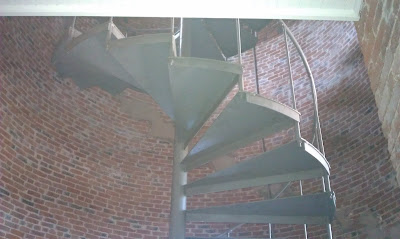 We rode our bike around the island, and it was so nice. Carefree island life felt so right. We went to the water’s edge and watched the sun go down. I even managed a smile. 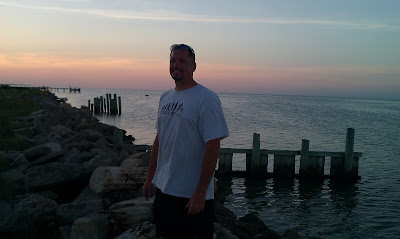 After a day of lighthouse viewing and riding bikes, we headed to the local watering hole for some beer and grub. They even had bicycle parking. 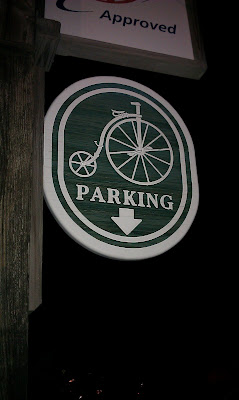 The next morning it was time to go home. We had to stop one last time so Little Miss Sunshine could have her picture taken by a sign on her favorite road. 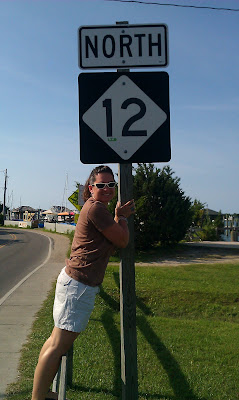 On our way home, we found one more lighthouse. This one is was out in the water long ago, but the local townspeople built a replica to display on the riverfront. 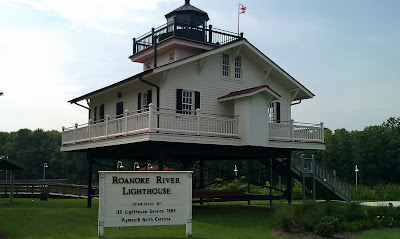 We got to go inside and look around. 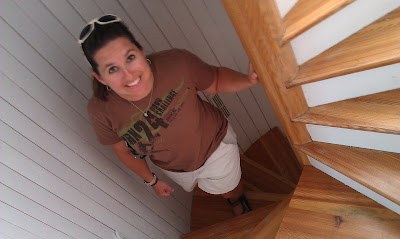 We even climbed into the the “lantern” room. 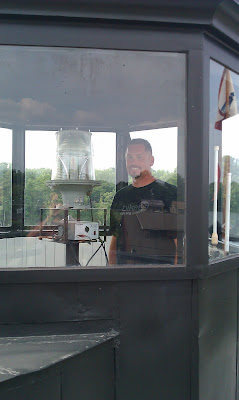 Getting out on the upper deck was a little difficult though. After that, we made our way home. I didn’t want it to end, but I know you probably want this blog post to end. Now that I am fully relaxed, it’s time to get back into the swing of things. This weekend should be chock full of mountain biking adventures, and maybe I’ll even talk about a new bike that’s being built here at the B-43 headquarters. See y’all Monday.
Posted by TheMutt at 8:36 AM

this is so funny that we were both out there at the same time! it was great weather and glad to see you had fun. For future reference there was a sandwich shop called Kaia's in Hatteras that also had an incredible beer selection (even including growlers from Craggie, an Asheville microbrew).