I Am So Fat

When I went to pick up my packet at yesterday’s race in Danville I found a handwritten note on it: 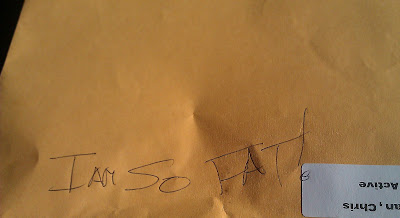 Turns out my pal D-Wayne decided to give me a little shit for my rant on Friday.


I definitely got a kick out of it, and I’m glad he knows that I wasn’t talking about him when I was whining about the woes of being a Clydesdale.


So anyway, a bunch of us big boys lined up at the start, and I was ready. We took off from the line and headed down the fire road, and I wasn’t really happy with the slow pace. I tried to sprint a little bit, and that’s when I noticed that I had trouble clipping in with my left foot. I kept trying, but I also had to keep up with the group.


We had to make a left-hand turn up another fire road, and I will still having trouble clipping in. At least I was still up front. 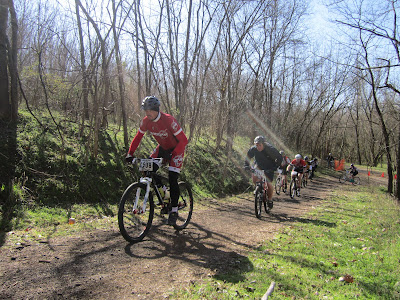 I knew something was wrong. I also knew that I had to pull over and check it out, risking my position in the race. I hated to do it, but I had to.


I stopped real quick and looked at my cleat, but I didn’t see anything wrong. I watched as my entire class passed me by. I hopped back on my bike again, and tried to catch up with them.


I still couldn’t clip in, so I stopped again to check out the pedal.

That’s when I found this: 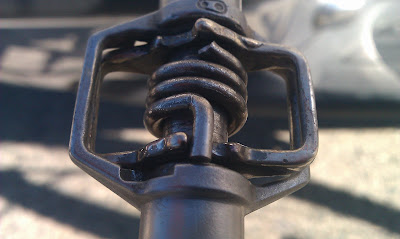 Shit. The spring on my pedal had snapped, which rendered my “clipping in” ability useless. Without being able to clip in, I would have trouble standing to climb, and the descents would be scary as hell with zero stability. Since I wasn’t even a mile into the first lap, I had a few options.


First, I could quit. Quitting a race is a no-no for me, so I dismissed that thought as soon as it popped in my head.


Second, I could ride back to my truck, grab an extra set of pedals (that I just so happened to have there), and replace them. I would get back in the race, but not have a chance in hell to catch up with my group.


Last, I could just keep going. It wouldn’t be easy, but at least I would have a chance at avoiding a DNF.


I felt like I had no choice but to keep going. If I quit, I would feel like shit. If I went back to my truck to change the pedals, I would’ve more than likely just given up and sat on my ass once I got there. I’m glad I kept going, because Lunchbox was just around the next corner to catch me in action. 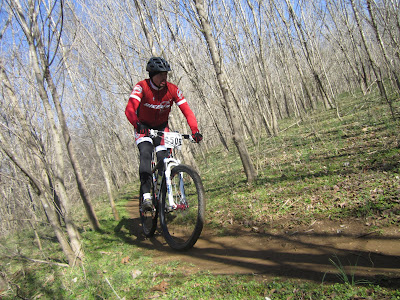 As I passed him by, I told him that I broke my pedal. He seemed shocked at my luck, but not at the fact that I was still going. I told him I would see him later, and set out to race the best race I could under the circumstances.


I got to work, and made it my goal to catch up to at least one person in my group. I mashed away, and pretty soon I saw someone up ahead. I was having a hard time climbing with only one foot clipped in, but I had somehow managed to ride right on by him. He was in my class, so that lifted up my spirits a bit.


With my little bit of new found confidence, I held on and made my way through the trail. Soon after, I spotted two more guys in my class up ahead. I quickly caught up to them, and made my move.


I passed them both, but one guy tried to stay with me. To lose him, I had to either risk my safety and haul ass on the downhill, or somehow find a way to stand up and climb. Without being able to clip in, I chose both of those options. I really had no choice.


After about three miles, he was nowhere in sight. It seemed as if I lost him for good. I passed a few other people along the way, but no one in my class. I was hurting, but at least I was moving along. With about a half mile to go on lap one, I was happy to see Lunchbox again with the camera. 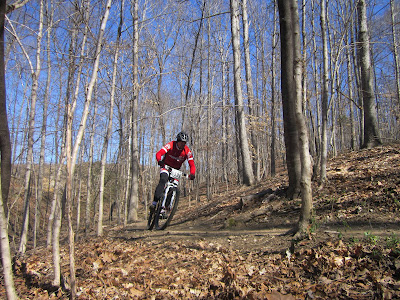 Every time I see him out there, it keeps me going. Whenever I’m having a rough time, I know he’s still there for me.


Anyway, I had another chance to quit when I went through the start/finish line, but I didn’t do it. I figured that I had already made it through one lap with a broken pedal, and I could make it through one more. I wasn’t in last place, so I could use that as motivation to keep me going. My right leg was feeling the affect of pedaling with only one foot clipped in, and I was starting to cramp a little. I worked as hard as I could to keep going, and I wasn’t about to let up.


After eight more painful miles (with some pedaling, scary slipping off the pedal downhill, and a little walking), I saw my kid waiting for me again. 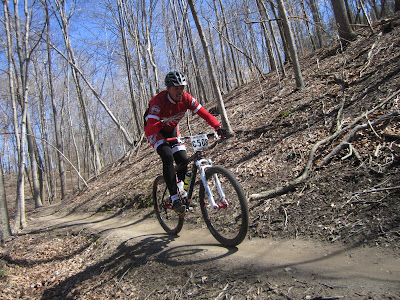 I was much happier to see him this time, since it meant that my race almost over. I crossed the finish line in 11th place, which is much better than I thought I would do. Well, I didn’t think I would break a pedal and have to worry about settling for “not last”, but I guess I’m good with that.


I worked my ass off out there, and I’m not really disappointed. Shit happens, and at least I finished. I got in a pretty good ride, and I really got a chance to see what I was made of. I’m not a quitter, and I proved that to myself.


I guess the next order of business is to contact Crank Brothers to see if they can help me with my broken spring. The pedals are less than a year old, so I’m sure they will work with me. In the meantime, it looks like it’s back to the single speed for a while.


That’s not necessarily a bad thing.
Posted by TheMutt at 8:18 AM

Most common thing I hear about Crank Brothers...

"Well, at least they have great customer service."

Sucks about the pedal.. sounded like you were off to a good start. But great job hanging in there and racing!! Just the thought of descending with a cleat sliding around on a broken pedal is scary.

I probably was off to a good start, but I will never know how I would've ended up. My foot slipped off a bunch, which made it difficult to hang on during the descents.

Dicky, I've heard that too, but this is the first time it's ever happened to me after running Crank Brothers pedals for years.

Way to stick with it. Busted pedal and all.