Remember those freaking hornets that tried to kill us?  Well, I went back out there to get some payback.  First rule of payback?  Get a weapon.

In this case I got two. 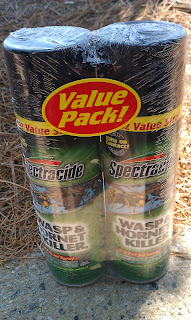 I stocked up on wasp & hornet killer and rode my ass over there to exact my revenge on those little bastards.  They were pissing on the wheels of progress at Captain Jim Bob’s Space Adventure, and I wasn’t having that shit.  I rolled up on ‘em all sneaky-like, and doused their asses with a whole can of my death spray.  Not being satisfied, I unloaded the second can shortly thereafter.

I stood there and took pleasure in watching them succumb to the poison, and I kinda felt like some kind of villain.   They all eventually perished, and I was able to retrieve the tools we had to leave behind the last time we were out there.  I didn’t really have time for any work on the trail, but I did bring along one of our leftover squishy bikes to test out the trail again. 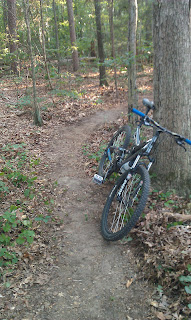 Now when I go back I should have a clear and easy path to get that section done.  Just in case though, I went out and bought more poison.  It will be by my side just in case those little fuckers called in for reinforcements before they died.

Work should resume in the very near future.

Speaking of work, Saturday was more of the same.  I had to go in early (I was on call, remember?), and I ended up staying all day.  I did think to bring along my bike, and I finally got out in the heat of the day for a ride.  Not that I’m complaining about the heat, but it was a little warm. 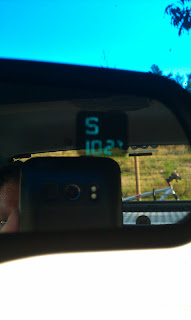 That was at about 5:30 or so, and I guess it was too warm for everyone else.  Since I was the only one brave enough to get out there in the heat, I had the trail all to myself.  That’s just the way I like it though. 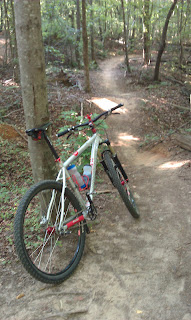 I had a good ride, but at ~6 miles per lap I started getting bored after going around a couple of times.  It was so hot out there that the squirrels didn’t even run away.  They sorta wandered off the trail as I came by.  I did catch some wildlife though, and since I was all alone I stopped for a photo.  I saw this rather large winged creature go over my head and settle in a tree, so I stopped to say hello. 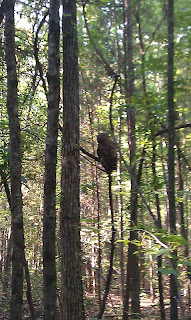 I asked him how many licks it took to get to the center of a Tootsie Pop, and he told me it was to damn hot for that shit.  So, I pedaled on my merry way.

When I got back to my truck, I felt great.  Being out in the heat riding your ass off can do wonders, and it was just what I needed to get away from the stress of being on call for work (and actually working.)  I think it’s funny to hear people complaining about the heat, because they are the same ones that bitch about the cold weather in the winter.  If you want to sit on your ass in the house and cry about the weather, fine.  As for me, I’ll be out there enjoying my life on two wheels.

Oh yeah, tomorrow is a holiday in case you didn’t know.  That means I won’t be here.  You should find something else to do, like trying to blow off your fingers with firecrackers or something like that.