A Little Bit Of Free Time

With only two days (including travel time) in Northern Virginia, I didn’t think we would have time to get out on our bikes. We brought them just in case, and somehow we managed to find the time to ride. One of the local shops recommended a trail really close by, the Conway Robinson State Forest. 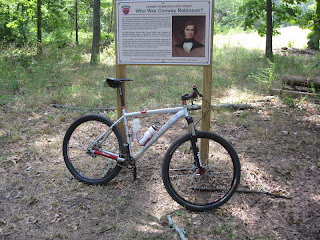 The locals said it was pretty easy, and since we didn’t have a whole lot of time I was kinda glad for that.  Even though it’s really close to the mountains, it’s surprisingly flat. 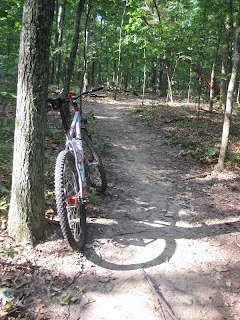 We rolled out, thinking that this would be a really easy ride.  I was on my single speed, and I was spinning like crazy.  The only thing that kept it interesting were a couple of log piles and strategically placed rocks. 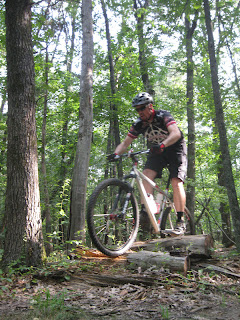 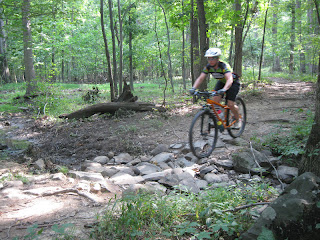 As we rounded a corner, I saw something odd.  It was some sort of teepee, probably made by some local kids.  I had to get in it though. 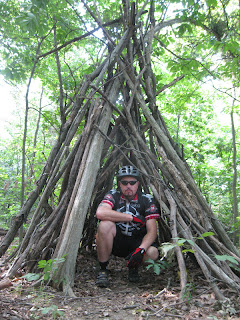 After that brief stop, we continued along the flat (but still fun) trail.  All of a sudden we came to an intersection, so we decided to take it.  Immediately the terrain changed. 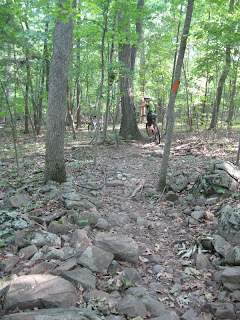 Just that that it felt like we were kinda in the mountains.  There were rocks upon rocks, and a few more “features.”  I had Little Miss Sunshine pose for me on one of them. 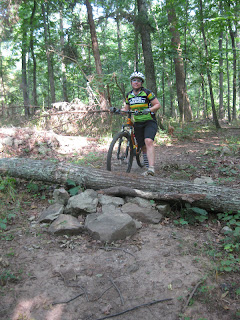 The trail got progressively steeper and rockier after that, much to my delight.  I felt like I was actually mountain biking, instead of riding along in the woods on fire roads.  It was really fun. 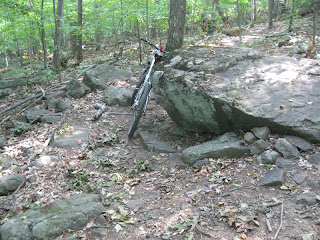 Plenty of rocks and steep drops, which were a sharp contrast to the trail leading up to that point.  We were really having a good time out there. 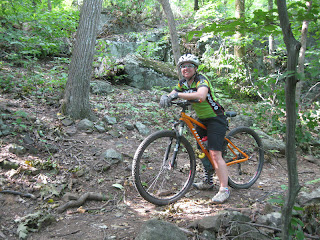 After that loop, we got back to the main (read: flat) trail.  The scenery was a little better though, so I stopped for another photo. 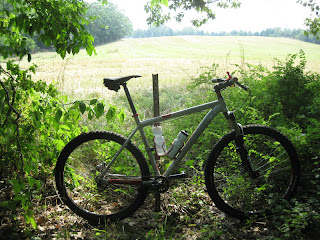 What made this so nice was the fact that we were right next to the site of the First and Second Battle of Manassas (or Bull Run depending on who you talk to.)  The state forest is right next to the Manassas National Battlefield Park, which I’ve visited many times throughout my life.  It’s a pretty cool place to visit for sure. 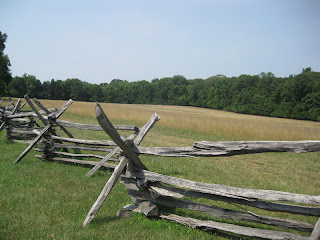 Back on the main trail, we ended up on a section that goes over an old railroad line used during the Civil War.  It was flat too of course, but it looked like something out of a story book. 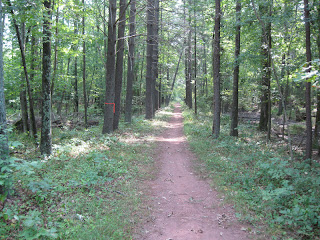 The trail got a little bit technical after that, but it was nothing we couldn’t handle.  In fact, I don’t think I was even breathing heavy.  The last leg going back to the parking lot went over a little creek, so we got to ride across a neat little bridge. 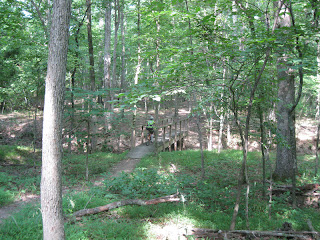 It was a fun ride. That first loop was only about four miles, so we headed back out to do it again. Not an epic ride by any means, but at least I got to ride a little bit while we were away.  The next time I go back up there I’ll be sure to hit it again. It wasn’t really supposed to be a fun trip, but we did manage to have a good time (when we had the time.) I got to partake in another one of my passions up there, so tomorrow will most likely be all about that.