So yeah, I decided to race on Sunday.  After whining about racing against those “serious types” in a lap race, I realized that it’s what I do.  While I may not be super serious about it, I do enjoy getting out there and pushing myself.  Several members of the non-serious crowd persuaded me to head up to , so I gave in.  I thought it was the right thing to do.

Why all the fuss about a simple cross country race?  Well, I guess the fact that I had to make an emergency out of town trip last weekend kinda wore me out.  We got in late Sunday night, and the weather kept me from riding all week.  As I mentioned yesterday, I did get out on the road, and that was the only two-wheeled fun I had since we got back.  Yeah, I was a little grumpy, and probably lazy too.  Plus, my main man Lunchbox is still on vacation in Florida.  That meant that I had to hit the road alone.

I wasn’t feeling it, but I went anyway.

I got there with plenty of time to spare, so I hung out with the locals at the start line. 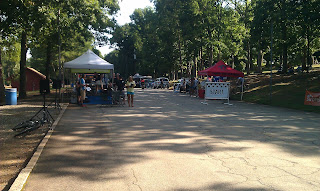 Eventually, I got changed into my Bike29 gear and started warming up.  I felt pretty good, and I was ready to get out on the trail.  I heard it was wet and slippery out there, so I started thinking about my strategy…at the start line. 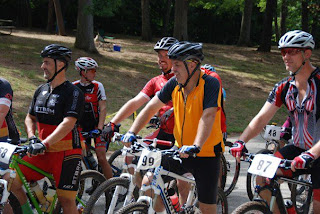 I lined up at the back of the pack, planning to take it easy and not bust my ass out there.  When the race started though, I couldn’t help it… 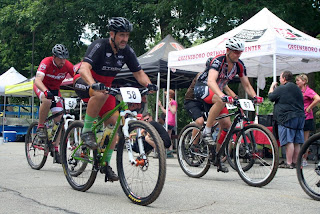 As we rounded the corner headed for the singletrack, I found myself in third place.  We hit the trail and it was a greasy mess, but I held on.  That didn’t last long though.  The trail dipped down and then went up a pretty steep climb, and I forgot that I was on a geared bike.   I stood up to mash up it in a big gear, and spun out immediately.  I watched as most of the field passed me by.

That took the wind out of my sails, but it shouldn’t have been such a big deal.  However, I felt a little pain in my knee when I tried to climb and I became concerned.  I backed off my pace a bit as we climbed a little more, but I could still see everyone in front of me (and a few folks behind.)  As the first lap wore on though, I could feel my knee getting worse.  I let one guy, then another go by, and it turned into a survival race at that point.  I kept seeing people in front of me within reach, but I just didn’t have the power to catch them.  That continued until the end of the lap, and well into the second lap.

As I passed the start finish line for lap three, I had bigger problems.  My knee wasn’t really getting any worse, but at that point I was getting bored.  Three laps on a 5.6 mile course is a little tedious, and it was all I could do to keep from throwing in the towel.  I don’t quit races, but damn I wanted this one to be over.  I eased my way through the rest of the race, trying to keep from getting hurt worse and fucking up my upcoming trip to .

After what seemed like an eternity, I crossed the finish line.  I had a pretty shitty race, and ended up in 7th (I think.)  The results weren’t posted before I left, but unless someone quit that was in front of me then I’m certain that’s where I ended up.  Seventh doesn’t sound so bad, right?  It does when there were only seven people in the class.  It wasn’t my first DFL and it certainly won’t be my last, that’s for sure.

I’m still glad I got out there.  I pushed myself through the pain and boredom, and got to hang out with some pretty cool people afterwards.  I guess I’ll stop bitching about these races from now on and just keep plugging away.  There are only a few more in the series anyway, but I don’t have one for a little while.

Now I can focus on my big road trip.

Expect to see tons of chatter regarding Single Speed USA over the next few days, since I will be on the road in less than a week.

I mean, what the hell else am I gonna talk about?